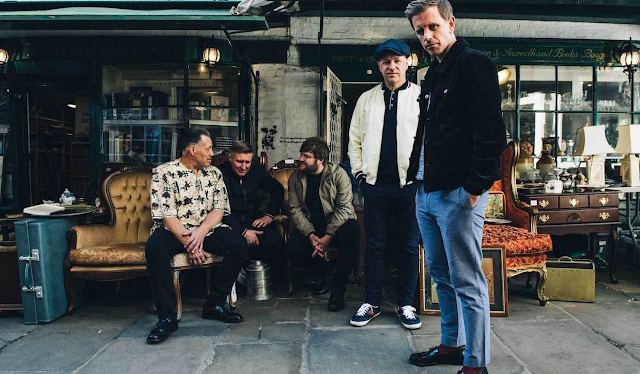 Stone Foundation are an English band formed by Neil Sheasby and Neil Jones in 1997. They have been an impressively prolific band and also a most talented one. Paul Weller loves them and so do I. They all look like "proper geezers" too, don't they.... 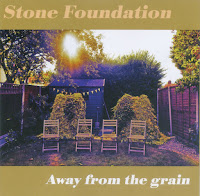 Promoting themselves as American deep soul with a Midlands edge, Stone Foundation's debut* was an attractive mix of gritty rock-soul, Northern Soul grooves, Chairmen Of The Board, Al Green, Paul Weller and Style Council influences and big early Dexy's Midnight Runners brass breaks. Throw in some hints of Ocean Colour Scene too. It is an appealing amalgam of soul and punchy horn-driven rock.

* I've just found out that the band released two albums before this, but I have been able to source them.

Uncomplicated is an absolute copper-bottomed corker of an opener with a drumbeat straight out of Charlie Watts on You Got Me Rocking, a riffy Weller-ness circa Heavy Soul-As Is Now and some killer organ and guitar. Great stuff. Human has a lovely, deep, warm bass line underpinning its seriously funky and brassy groove. Again, this is stonkingly good. Check out the superb funk of Get It Back too.

Northern soul legend Nolan Porter guests on a couple of tracks. Tracing Paper is very Northern Soul meets The Style Council and is quite irresistible. Right Track is great too, as is These Dreams (Of You).

Musically, there is lots of the afore-mentioned brass, some winning soulful organ, lovely deep bass lines and Memphis-style Steve Cropper-esque guitar. There is the occasional trumpet solo too. Dogtooth is a really impressive instrumental that shows off a lot of these good points. Only the odd Tales Of Terence Rigby fails to really hit the mark. The powerful, chunky riffs of Making Time get things back on track, however. As with all of their albums, it is excellent but remains slightly under the radar and for those who dig deep only. 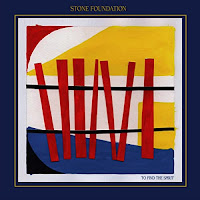 This album is even more Dexy's-Van Morrison in his Celtic soul era-influenced, with more of the omnipresent Weller effect, along with some ska revival-style trombone and trumpet. The music is once more joyously soulful throughout and an air of honest, retrospective but respectful simpler grass roots musicianship pervades with every note. To Find The Spirit and Bring Back The Happiness are both uplifting, buzzing servings of soul-rock to begin the album with. When You're In My World is a truly sumptuous Stax meets The Style Council soulful number. Stronger Than Us is so Dexy's it could almost be them - just listen to that rousing horn riff. The excellent soul-funk of Hold On meets the same high standards.

There are also some very Van Morrison-inspired spoken reminiscence parts which, although obviously derivative, are still effective, uplifting and moving. Check out Wondrous Place. If Morrison can take me to Heaven, so does this. Glorious. Oh, and they cover the man's Crazy Love impressively too, rubber-stamping their influences. Don't Let the Rain is funkily fine but at eight minutes plus is probably a few minutes too long while Telepathic Blessing is deliciously weird and somewhat difficult to categorise. The album gets a bit psychedelically-dreamy towards the end and it loses just a bit of continuity at the beginning of Child Of Wonder's spoken part, but that is soon reined back in. 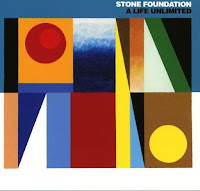 From the very first notes of Beverley, more Van Morrison meets The Style Council meets Dexy's brassy soul is upon us. While Stone Foundation are truly excellent, they don't change much, so if you like this sort of thing you like it and you will be satisfied.

Runs of albums like these three, that are relatively similar do not necessitate detailed, track-by-track analyses like I would do for The Beatles, David Bowie, or Queen, for example. It is simply more sumptuous, very appealing soul with a punchy edge, funky hints and bucketfuls of ska-style brass. They go a bit jazzy and improvisational in places on this one too. Listen to Speak Your Piece. These guys can play.

A Love Uprising has real echoes of when The Style Council dabbled in rap on A Gospel from their Café Blue album. Learning The Hard Way and These Life Stories are simply just great soul-rock tracks once more, as with much on the previous two albums. Pushing Your Love is a lush, sublime serving of super-sweet soul.

Something In The Light cooks with bongo-driven funky soul, The Turnaround is also in the same vein, but more laid-back. Get a load of the bass and organ followed by the trumpet on the sublime The Night Teller too.

It is a very difficult call to position these albums against each other and is possibly influenced by the fact that I have listened to three Stone Foundation albums in a row. This one gets better and better as it progresses. In fact, I will put this marginally above the previous one, as that tended to tail off just a bit in its second half. It may well be my favourite of all three too as I am loving it more and more with each listen. Make no mistake though, they are all damn good. Listening to these three albums for two and a half hours this morning has been a genuine pleasure, it really has.

There have recently been three more Stone Foundation albums, all of which are, unsurprisingly, eminently listenable. Does much change on them? No. They know their groove and they stick to it. 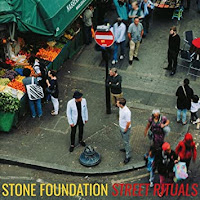 Stone Foundation struck lucky in 2016 when Paul Weller got in touch with them and suggested producing their next album. They were flattered and enthusiastic about the idea and he duly did indeed produce the album, most excellently, bringing the group to a lot more peoples attention.

The album has a very Weller mid-nineties feel to it, mixing Weller-style rock with seventies-style soul grooves. The result is most satisfactory I must say, and it almost plays like a Weller retro soul-themed album with a different vocalist. So much of the album is just so very Weller. Just check out the Chic meets Harold Melvin & The Blue Notes vibe of Simplify The Situation or Open Your Heart To The World for starters.

There are tracks here too, that are very Style Council as well, on their Shout It To The Top soulful mode, particularly on the organ and strings. The Limit Of A Man, for example, sounds as if it is 1984 again and TSC are swanning around in their pure white denim once more. Weller shares vocals on several of the tracks and is instantly recognisable. Soul-funk legends Bettye LaVette and Willlam Bell guest too, the former contributing some fabulously funky vocals on Season Of Change and the latter some What's Going On-influenced soul on Strange People. The music is attractively deep, warm and bassy, enhanced by soulful strings and the obligatory punchy brass breaks. The rhythmic percussion on many of the tracks is impressive too, as is the soulful organ and gentle wah-wah guitar strummings. These guys know their soul - dare I say it - their soul foundations. Many of this album's tracks are covered in more detail on the live album review that follows. To be honest I could make a case for any of them - there is not a sub-standard cut on the album. 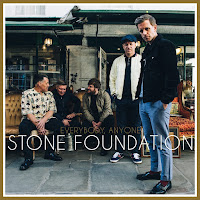 If I said this was another serving of seventies-style funky soul you wouldn’t be surprised would you? Of course, that is exactly what it is.

Sweet Forgiveness once again taps into  the What’s Going On vibe that the group so love, mixing it, as usual, with a strummed Weller-style funk and some delicious percussion breaks. Standing On The Top is a slower tempo soulful grinder with more distinctly seventies ambience. At times it reminds me of Hot Chocolate’s slower numbers from their earlier numbers. Don’t Walk Away is a very Weller-ish piece of laid back soul featuring a guest vocal from Weller favourite, folk-soul singer Kathryn Williams. A faster Chic-style funk is to be found on the string-enhanced Give The Man A Hand. Next Time Round is another of those Style Council circa 1984 numbers, with bits of Chris Rea’s laid-back material in there too.

Carry The News is deliciously relaxing in its gentle syncopation and funky flute. Get a load of the big, chunky, funky bass on Only You Can, which brings to mind Cymande’s stuff from around 1973. Heavenly Father and Belief are both low-key, smooth soul numbers.

Please Be Upstanding is livelier, with some fine wah-wah funky guitar while Rise Above It is a beautiful, organ-powered bit of late night soul to end another solid album with. 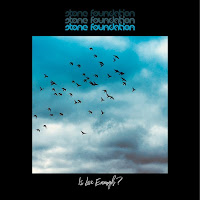 This latest album shows just what a prolific and underrated band Stone Foundation are. As I have now come to expect, it is packed with top quality funk-soul. In Barry White, Earth, Wind & Fire or Terry Callier style it features several short instrumental interludes between the tracks. To be honest, as on all the other artists’ albums, they are pretty superfluous (and they are a bugger when they turn up for their thirty seconds in a random playlist).

Freedom Starts! is impressively deep, bassy and thumpingly funky, full of brass breaks and those great guitars. Changes is a reassuringly warm and solid slow-paced number and then we get an excellent contribution from mentor or maybe just fan Paul Weller on the superbly soulful Deeper Love. This a track that just cooks on a wonderful medium heat from beginning to end. Hold On To Love is a fine ballad and The Light Is In Us is great seventies style upbeat soul. Is Love Enough? also has that seventies, Blaxploitation funky sound to it, complete with flute.

Learn To Love Again ploughs a muscular soul furrow, Af-Ri-Ka is a robust hi-life influenced Afro-funker, Picture A Life is pleasant, laid-back, brassy soul. Is the rest of the album going to throw up anything different for me to describe? No is the answer to that, not that doesn’t mean the final few tracks are poor, they just don’t offer up anything different for comment. (To be fair, actually, 83:This Is Our Time includes a bit of rap). Oh ok then, Help Me is classic seventies soul and the catchy Last Act Of Love is possibly the album's best track, but suffers from being at the end of what is a long album.

Stone Foundation know what they like, and they know what they want to record, but they don’t change much so each album brings more of the same, something that an artist like Paul Weller is not guilty of, for example. That said, I like the albums so there you go. I like The Rolling Stones, Van Morrison and UB40 and they sound the same on many occasions too.

As mentioned, Stone Foundation have a strong musical relationship with Paul Weller, read detailed reviews of his work here :- 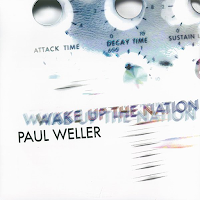