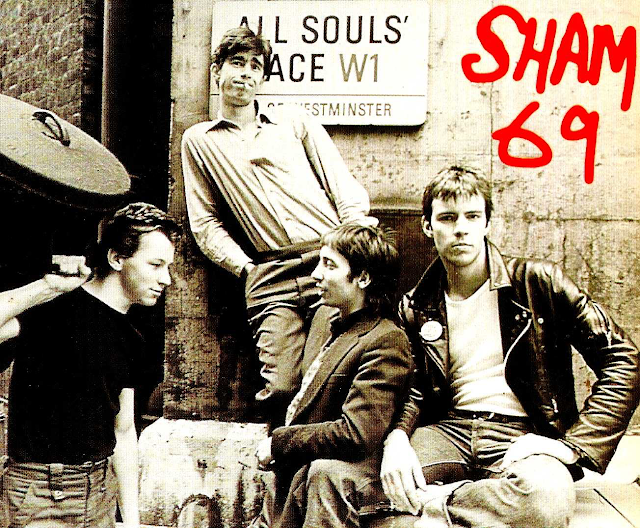 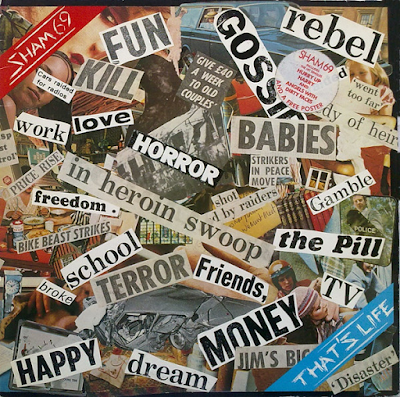 This was something unique - perhaps the only punk "concept album". It is a series of connected songs  based around the humdrum, working-class London life of an often disillusioned young man similar to the character of "Jimmy" in Quadrophenia. He is also called Jimmy on here, I believe (or maybe it's Joe). Lead singer Jimmy Pursey was not so subtly portraying himself. The songs are interjected with short vignettes of dialogue from the main character's domestic life. His mother was played by future East Enders actress Wendy Richard, known at the time for playing Miss Brahms in Are You Being Served? - "you bloody get upstairs and have a wash...". It has an excellent cover made up of contemporary newspaper headlines in collage.

On to the band. Sham 69 were an often shambolic, to coin a phrase, punk act. Their debut album, earlier in 1978, Tell Us The Truth contained some excellent, rabble-rousing anthems, especially the storming single Borstal Breakout, which is an essential inclusion in any "classic punk" playlist, for me. The Kids Are United was another wonderful tub-thumper of a single. I saw them live in 1979 and they were great. One of the most viscerally exciting punk gigs I ever saw. Unfortunately, they started to attract a neo-Nazi skinhead audience which eventually did for them. Bookings dropped and the always emotional Jimmy Pursey became frustrated by it all, claiming he "just wanted to do it for you kids out there...I'm just doing it for you...". Packing it in a few years later, he seemed a bit of a broken man. This, though, was his finest moment. 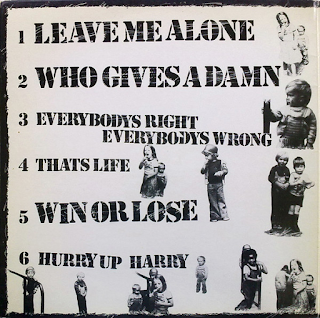 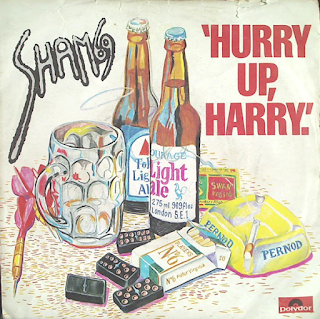 On to the tracks now. A bit of kitchen sink dialogue starts things off before Leave Me Alone, with a moaning bickering family going at it over breakfast before the abrasive punk guitars, drums and Pursey's gruff voice arrive. The message is clear to the lad's parents - just leave 'im alone.

Who Gives A Damn sees him off to work on the bus, miserable as ever, griping about the day to come over a slowed-down, more traditionally rock beat, as opposed to punk.
Everybody's Right, Everybody's Wrong sees him late for work and sacked, and in Quadrophenia style telling them to stick it. The song has real echoes of The Who's 1973 concept album as well, it is very like The Dirty Jobs.

That's Life is a solid, riffy punk stomper. It has the main character bemoaning his lot, playing the victim. It is never his fault, of course. He then blows his last wage packet on a winning horse. This is related to us in the upbeat, oikish Win Or Lose.
What next? Time to celebrate in the pub, of course. Up comes the hit single and laddish singalong of Hurry Up Harry. Some may find this a laughable, idiotic song. Personally I love it. As Pursey memorably sings, "How I wish you'd listen to me - no, I don't want a cup of tea....".

Time for our anti-hero to try his luck with the "birds" on Evil Way. It's Friday night and the lads want to "get their end away". The song is genuinely amusing. Well, it is for me anyway.
Sunday Morning Nightmare is another thumping punky number as indeed is the album's other hit single, Angels With Dirty Faces.
Reggae Pick Up, Pt. 2 is a fetching little slice of boy/girl pub chat that always brings a smile to my face. The album ends with the anthemic, pounding Is This Me Or Is This You.

Look, this is not an album I listen to very often, probably every five years or so. It is very much of its time, but it is always an enjoyable half hour that blows the cobwebs away and is quite endearing in its way. 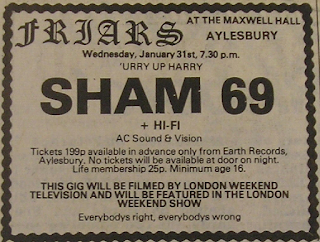