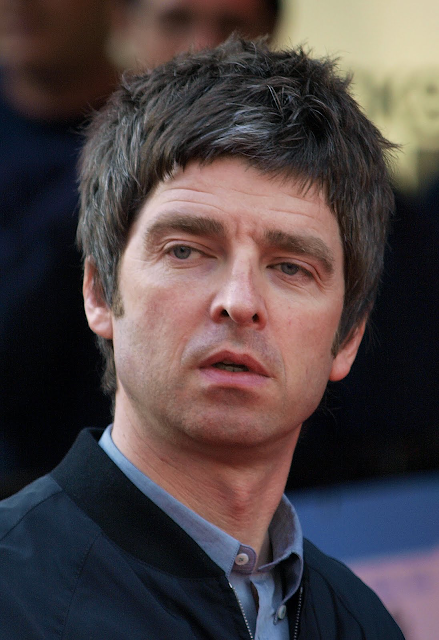 This was Noel Gallagher 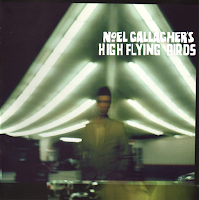 's first solo album, but it could be from any point in his solo career. The thing with Noel or Liam solo albums is that when listening to one you feel you need a few tracks from the other brother. Mix up tracks from each of their solo albums from a period and you have a sort of Oasis album. This album results in the same feelings, although it is pleasant enough. The brothers have become solid and reliable, and I sort of like them for that. The album still sounds like an Oasis one, though, all their solo work does, really, let's be honest. Here it is Oasis with a bit less clashing guitar and more jaunty brass breaks. It is not as different as Noel hoped people would find it to be. It is probably exactly as Oasis would have sounded had they carried on.
Everybody's On The Run is like an Oasis anthem, recognisable in some ways but with added orchestration and sweeping, romantic strings. Noel shows what a disciplined perfectionist he was, compared to brother Liam's more ads hoc, instinctive approach. Dream On is very Brit-Poppy (for me, anyway, even though I'm from a generation earlier) - all very singalong and vaguely summery. Festival-ish. I'm sure you know what I'm trying to express. If I Had A Gun... is a typical Noel acoustic meets a solid drum beat ballad.
The Death Of You And Me utilises that familiar Oasis lyrical rhyme scheme. It has some nice, chilled-out acoustic moments, a bit Paul Weller-ish at times, unsurprisingly, as Noel and Weller were hanging out at the time, I think. Nice jazzy brass flourishes in there too. (I Wanna Live A Dream In My) Record Machine is a leftover from Oasis days, and sounds it, with its Revolver-era Beatles vibe (what a surprise!). I like it, though. AKA What A Life! is to me, very U2-esque, right down to the Bono-ish vocal and guitar breaks. Again, however, it is catchy and appealing. Soldier Boys And Jesus Freaks has a lively sort of late sixties groove to it and more those likeable brassy interjections. AKA Broken Arrow is very Weller-influenced in its acoustic but solidly rocking mid-pace feel. As with much of the album it has a fine feel to it, difficult to categorise, but reassuringly sound. The guitar, at one point, sounds contemporaneously Springsteen-esque.

(Stranded On) The Wrong Beach ups the tempo but it is certainly not stadium rocker but it has one of those choruses that begs for Liam to sing it. It is probably the album's most obviously "Oasis" track. Stop The Clocks was another Oasis relic. It doesn't sound it, however, being a spacey, chilled-out psychedelic-ish number with its roots very much in the late sixties. As I said, this was a good album, with some differences in approach, but not obviously so.
Chasing Yesterday (2015) 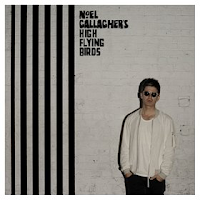 Liam Gallagher is very John Lennon-ish in places, his brother Noel is very influenced by Paul Weller and early seventies Traffic. Throw in a bit of Stone Roses as well. Both, of course, still cling on to that Beatles influence and both continue to sound like Oasis should have sounded had they continued. This, Noel Gallagher’s second High Flying Birds album, from 2015,  is a good one. Kicking off with the inventive Riverman which is full of all sorts of sounds and musical ambiences, even some excellent saxophone at the end, which rarely, if ever, be found on an Oasis album, certainly not the early ones.
In The Heat Of the Moment is one of those where, despite its bluesy rock influences, sounds a lot like Oasis in its refrain.  The production is a little “Oasis Wall Of Sound”-ish, but is better than previous productions. The different instruments are more defined and the bass properly clearer. The Girl With X-Ray Eyes has a brief Wonderwall-type intro, then, as often with the Gallagher brothers, some Ringo Starr drums kick in. Another one with one of those irresistible hooks. Gallagher (and his brother) both had a way of nailing a “gig singalong” chorus. A lot of the tracks begins with tiny snippets of studio chatter or count-ins, giving it the impression of being almost ”live”, which is not a bad thing. Lock All The Doors is a spirited rocker, although its sound is somewhat muffled, compared to others on the album. It has a great punky guitar riff though.
The Dying Of The Light has another of those Oasis acoustic intros and an affecting piano coda. Noel’s voice is not as clear or iconic as his brother’s unfortunately. You do find yourself wondering what Liam’s voice would do for these songs, unfortunately for Noel. That is a small point, really, his voice is perfectly acceptable on these songs. The Right Stuff has an acoustic intro too, then some weird keyboards, Eastern-style backing and a bassy intoxicating rhythm. Even some horns appear. It sounds really like some early seventies psychedelic stuff from someone like Traffic, or indeed something off Paul Weller’s excellent Saturn’s Pattern album from the same year. This is mysterious and enigmatic. One of the best, most inventive tracks on the album. It really gets into you. Great stuff.

While The Song Remains The Same is a solid, drum-driven track with a distanced, wistful vocal from Gallagher. It sounds like something else by someone but I can’t put my finger on what. Something from the nineties, and not Oasis. The backing certainly has airs of that used on Deacon Blue’s 1993 Whatever You Say, Say Nothing. The Mexican is an urgent, seventies-style rocker with a cowbell drum rhythm, like something by ZZ Top, it is fun of “rock” guitar riffs too and some punchy horns. I love this actually. You Know We Can't Go Back almost goes all Rolling Stones in its intro. Briefly. It rocks, though, big time. Another of the album’s highlights.

Ballad Of The Mighty I is a pulsating, bassy closer with a captivating rhythm and, at times, some hippy, summer of love-style harmonious backing vocals. Almost Crosby, Stills and Nash! Who would have thought it. This is an impressive track all round, with considerable diversification from that Oasis-influenced sound. This has been an interesting album. Many say Liam’s As You Were has been the finest post-Oasis album, possibly correctly. This runs it close though. 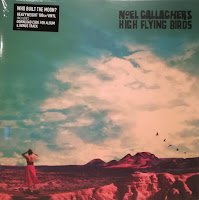 This album, from 2017, is the group's third and is a lively affair, full of wall of sound kitchen sink instrumentation and occasional George Harrison All Things Must Pass influences. Yes, the sound is loud but indistinct, but it doesn't prevent the album from succeeding because of its sheer up and at 'em vitality. It dabbles in all sorts of styles within Gallagher's instinctive restrictions. I can't help but like it. Really good stuff. Gallagher described it as him "in more colourful clothes". I guess that sums it up perfectly.
Fort Knox has a buzzy guitar intro and a crashing, muffled drum sound but it still carries an "oomphy" appeal to it. Muscular is probably the best word, or chunky. I expect Noel with start singing in a minute, but he doesn't, it remains as an instrumental, with only occasional distant, grainy backing vocals. It has echoes of Black Grape and The Happy Mondays in their dance eras. The vocals arrive on the irresistibly catchy Holy Mountain, which an almost glam rock stomping sound to it, merged with a wall of sound muddiness. It is one of the most blatantly commercial rocking numbers Noel had ever done. Keep On Reaching is a much warmer-sounding number, with a melodic bass line, great backing vocals and brass parts. Again, it is not really like anything he had done thus far. I really like it. It's A Beautiful World sees George Harrison-style Eastern influences merging with contemporary dance beats to great effect. There are vague hints of The Who's Baba O' Riley keyboard loop in there too. Once more, it is a thoroughly captivating track with another killer bass line. Everything so far on this album has been top quality, enjoyable fare.
She Taught Me How To Fly

is a catchy, fast-paced psychedelic-influenced rocker that doesn't let up for a minute. Be Careful What You Wish For has John Lennon hints (there's a surprise) but it has more than enough of a brooding, mysterious sound to it to render it more unique to Noel. Black And White Sunshine is a jangly guitar-driven late sixties-style rock number that has a bit of an updated Oasis feel to it, but Noel's vocals are warmer, less brash and harsh than Liam's. The instrumental Interlude (Wednesday Part 1) is Paul Weller-inspired both conceptually and musically while If Love Is The Law is a tuneful, if slightly sonically dense offering. For me it has echoes of later-era Jam about it, just here and there. The Man Who Built The Moon is an industrial-sounding early ELO meets late sixties Beatles and listening to Oasis chugger. Noel sounds like Liam on this for probably the only time. End Credits (Wednesday Part 2) finishes this excellent album on an appealing, chilled-out acoustic, drums and keyboard instrumental vibe. Great stuff. Nice one Noel.