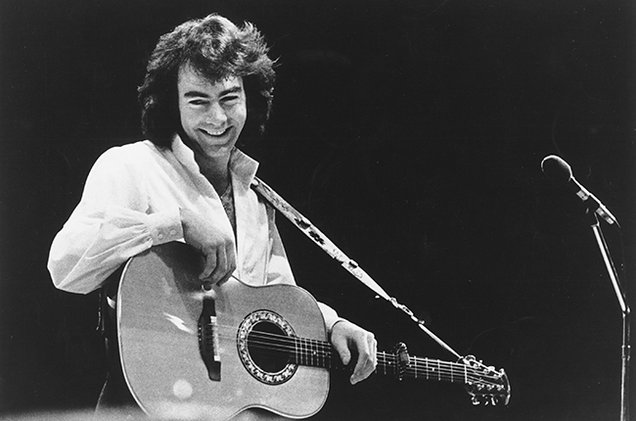 Forget the schmaltz, Diamond is one of the great singer-songwriters....
Stones (1971) 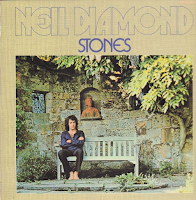 An excellent album from 1971 from Neil Diamond. This was the period when he started making serious impact on the charts. It is was to dismiss Diamond as a "housewives favourite" easy-listening artists, but a few listens to his material, particularly from this period should help to change those opinions. He is one of the great singer-songwriters, composing catchy pop tunes, with killer hooks, but also deep, meaningful romantic and moving songs too. He also had a great taste in choosing which songs from others to cover.

The sound quality on this digital downloaded version is excellent - clearly, warm and bassy, as I like it.
As for the songs, the elegiac and autobiographical I Am...I Said is simply one of Diamond's finest ever songs, packed full of emotion, a great vocal and couplets like "did you ever read about a frog who dreamed of being a king - and then became one. Well, except for the names and a few other changes, if you talk about me - the story's the same one...". Lyrics like this should not be underestimated. As I mentioned earlier, Diamond covers other artists' songs too - Tom Paxton's beautifully-orchestrated The Last Thing On My Mind is melodic and romantic and Roger Miller's cynical, marriage break-up number, Husbands And Wives is delivered superbly. So much so that you imagine the songs to be Diamond's own, so much of his own stamp does he put on them. Anyone with half an ear has to admit that they guy has a simply superb voice.

In fact apart from I Am...I Said, the beautiful Stones and the punchy, rhythmic, inventive Crunchy Granola Suite all the other songs are covers, which was unusual as most of his albums contained more Diamond originals than this one did. He had no need to worry, he had been penning decent songs for years, often for others. His lively cover of Joni Mitchell's atmospheric Chelsea Morning is captivating. He does it really well, again, as if it were made for him. He is a great interpreter of songs.

Jacques Brel-Rod McKuen's If You Go Away is another perfect fit for Diamond's dramatic voice. Leonard Cohen's Suzanne is so inextricably linked with him that is pretty difficult for anybody to do it, but Diamond handles it convincingly. Randy Newman's I Think It's Going To Rain Today sounds like something from a stage musical, Diamond giving it such expression. The reprise of I Am...I Said that starts halfway through the song was probably not a great idea. I get the "bookending" of the album with it, but another song would have been a better choice. 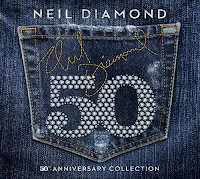 As I have mentioned in other reviews, it is easy to dismiss Neil Diamond as a "housewives' favourite", an easy listening lightweight. This is a unfair assessment. The man has written some exceptional songs both for himself and for other artists over a period of fifty years. He has a truly wonderful voice he is a great interpreter of songs, both his own and those of others. His instantly recognisable, powerful voice commands any song he touches. I have a lot of time for Neil Diamond and listening to him is always a pleasure.

Highlights are the wonderful, soul searching I Am...I Said; the singalong, arms in the air, Sweet Caroline; the catchy Cracklin' Rosie; the similarly appealing Crunchy Granola Suite; the melodic Song Sung Blue; the rousing pop of Beautiful Noise, Desiree and Forever In Blue Jeans and the heartbreakingly tear-jerking You Don't Bring Me Flowers sung here solo, without Barbra Streisand (the duet actually is a better version, however).

Personal lesser-known favourites of mine are the frantic name checking Done Too Soon; the evocative Shilo; the rousing America; the brooding Holly Holy and maybe my favourite Neil Diamond song, the vibrant tale of a revivalist preacher in the uplifting, charismatic Brother Love's Travelling Salvation Show. There are also Diamond's original versions of Red Red Wine and I'm A Believer, made famous by UB40 and The Monkees. I love the early Latin-influenced single Cherry Cherry too. Pretty Amazing Grace is an impressive later-era song too. There are so many great tracks on this album. Fifty of them in fact. The sound is remastered to an exceptionally high quality, which is great to hear. Highly recommended. Listening to it, you just realise what a great career Neil Diamond has had. Respect.