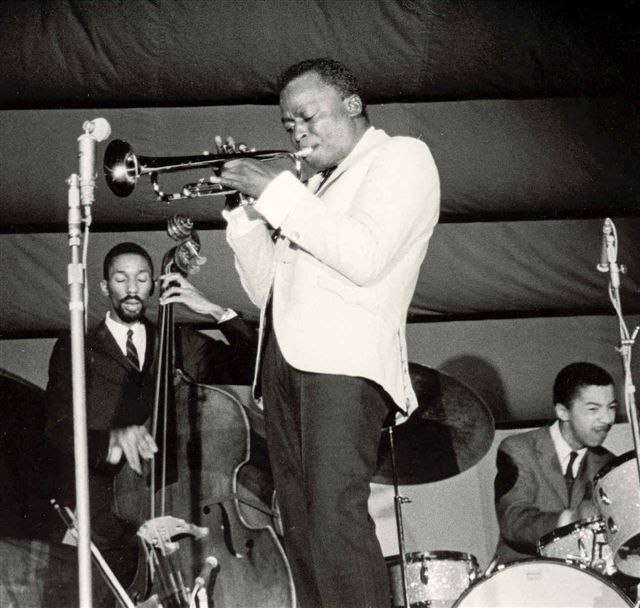 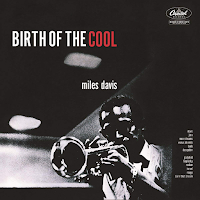 This is an album made up of recordings from 1949-1950 that is regarded as seminal in the post be-bop development of jazz, as the title says, it is considered the birth of what was known as "cool" jazz. Apparently, this was where forties-style big band arrangements merged with relaxed, laid-back hip improvisation - brush drums, melodic stand-up bass, intricate keyboards, alto saxophone and baritone saxophone together, of course, with Davis's trademark trumpet. The quality of the sound recording is superb, particularly considering their date.

The "cool", I guess, referred to that late-night smoky club ambience and finger-tapping on tables "hip" - an earnest, detached but knowing elegance. The decadence of the thirties brought up to date in the considerably more aware fifties. Jazz musicians were often black, they took drugs, they womanised. Miles Davis matched all three descriptions. The development of jazz like this and the clubs in which it was played was quite socially significant. New York, West Coast USA, London - they all had burgeoning jazz club scenes, and many provincial towns in Britain and the USA turned on to the "cool". These were, as Van Morrison often tells us, the "days before rock 'n' roll". This was, at the time, the trendiest music around. The album, of course, was released seven years after the music's recording and, although rock 'n' roll was obviously emerging, this was still considered far more hip.

Virtuosity was also encouraged in this type of jazz - be it saxophone, piano or bass and it came to define the "cool" era. Effortlessly stylish. Even now, just listening to it makes one catch that buzz, cats. 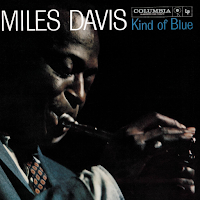 Never mind rock 'n roll. For many, jazz ruled the world in 1959. In many ways it was the music of the young and educated. It was not music of rebellion. It was seen as  music of intelligent appreciation. This was a cornerstone of that classic period and is considered by many to be the finest jazz album of all time. Indeed, for lots of people, this is the only jazz album they own. Good as it undoubtedly is, this is probably doing many other albums a bit of a disservice, however. I am not a "proper" jazz fan, I have to admit, but I do own several jazz albums, of which this is one, So, why is it so revered?

I feel the appeal of it is that it its a groove and stays there, for pretty much the whole album, from those first subtle and melodic bass lines on So What. What a bass line that is, by the way. There are not huge changes of mood or pace. It is improvised, instrumental jazz of the highest order and I have read that the musicians - Davis, Cannonball Adderley, John Coltrane and Bill Evans among others did not rehearse the numbers - Davis gave them their initial framework and they just improvised. If that is the case, and it no doubt is, then it certainly is a remarkable piece of music. It moves effortlessly along, but to think that it is, in effect, made up on the spot as they went along is mind-blowing, really.

The great thing about the album is that it serves fantastically as background late night music or dinner party music, yet it can also be listened to in order to experience all the nuances in it as well. It is, as all the reviews seem to say, "modal", whatever that is, and they rave about the lack of chord changes and so on. I literally know nothing about that. I have Davis' earlier album, Milestones, which was also modal, apparently. I wasn't aware of that, either. Maybe ignorance is a great position from which to approach the albums, with an open, inexpert mind. I know that it has a superbly laid-back ambience and relaxed feel to it and it clearly contains musicianship of the absolute highest quality. As in all these fifties-sixties jazz recordings, the sound quality is superb too. How did they manage that so far in advance of their rock-pop counterparts, I wonder? The stereo version of it is sublime. Perfection, actually. Anyway, anyone looking for an introduction to the beauty of jazz should probably start here, but also be aware of plenty of other excellent material that exists too.
In A Silent Way (1969) 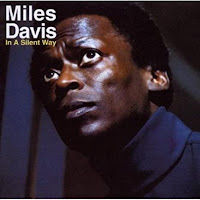 Regarded as the first of Davis's "fusion" albums, this was a two track suite of improvised jazz featuring Davis on trumpet, John McLaughlin on guitar, Chick Corea and Herbie Hancock on electric piano, Wayne Shorter on saxophone, Dave Holland on bass and Tony Williams on drums.

I have to say that I much, much prefer it to Bitches Brew, enjoying its relaxing sound, deep bass, infectious cymbal work, intoxicating, spacey keyboards and superb trumpet solo. I find it more melodic and generally much more listenable. There is far less discordance or - for me - indulgence. I love the bass-keyboard-cymbals interplay half way through Shhh....Peaceful, it is totally captivating, as is the following saxophone. Get a load of that keyboard bit too. Where Bitches Brew was discordant, this is deceptively melodious and vaguely prototype funky in places too.

The second suite, In A Silent Way, is more laid-back and ambient, but suffers greatly from a hissy sound, unfortunately. when it breaks out into a chunky rhythm after about four minutes, though, this gets hidden. Once again, there is far more rhythm on this recording than on the next one, which basically had none, as I will go on to moan about.... 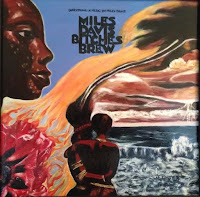 This was said to be a work of genius - one that inspired Herbie Hancock's Head Hunters and many other jazz funk fusion albums in the seventies. Miles Davis got together with Chick Corea, Wayne Shorter and John McLaughlin, among others, and, supposedly, got the funk. I had always thought of it (incorrectly) as a jazz funk album, but it isn't, it is far more of a jazz fusion one. I want more bass, more rhythm, more funk, basically, so it is always going to disappoint me.

Personally, despite a few moments here and there, I do not find it funky at all. It is a largely unlistenable, rambling, improvised piece of work that sees the musicians given free rein to express themselves. I recognise that many people love this sort of thing, and I agree that it requires immense talent to just carry on improving in that way. However, being brutally honest I just don't find it listenable at all, it comes across as one big cacophonous, atonal, discordant mess at times and, if that is seen as blasphemous, then so be it. Both Pharoah’s Dance and Sanctuary have some particularly tuneless passages in them. Many jazz critics agreed, it would seem. The Penguin Guide To Jazz said of it that it was -

"one of the most remarkable creative statements of the last half-century, in any artistic form. It is also profoundly flawed, a gigantic torso of burstingly noisy music that absolutely refuses to resolve itself under any recognised guise."

That sort of says it all - it acknowledges the work's inspiration while also recognising that it is a difficult listen. Thinking about it, I have a bit of a problem with perceived works of genius, being no fan of Smiley Smile and only getting some of the way there with The White Album and A Love Supreme. To me, despite its undoubted hidden depths, it is as indulgent as the prog bands were slated for being. Maybe my tastes are just too simple. It's not Miles, it's me. Ok, I hear you. Anyway, Steely Dan's Donald Fagen said -

"...essentially just a big trash-out for Miles ... to me it was just silly, and out of tune, and bad. I couldn't listen to it. It sounded like Davis was trying for a funk record, and just picked the wrong guys. They didn't understand how to play funk. They weren't steady enough..."

I'm totally with Fagen on this. There are many, many seventies funk albums and tracks that I would prefer to listen to than this. For me, it just didn't work the way I would have liked it too. I love Herbie Hancock's Head Hunters, by the way, so something good came out of it.

All that said, it was an album the like of which had not been heard before and its subsequent influence is unquestionable. I just don't really enjoy listening to it. Sorry. I will go for In A Silent Way as a listening choice every single time, however, although it was not nearly as commercially successful as Bitches Brew. So what do I know? About jazz, probably very little!
Email ThisBlogThis!Share to TwitterShare to FacebookShare to Pinterest