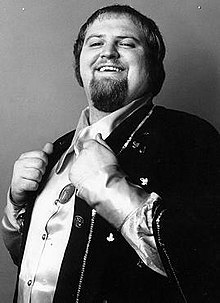 The Best Of Judge Dread (Trojan) 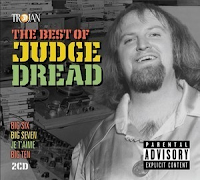 Possibly the most strange of all reggae artists in the UK commercial boom of the early seventies was Judge Dread, a fat white man from Snodland, Kent called Alex Hughes. He specialised in singing double entendre, risqué lyrics over and authentic reggae beat in a cod-Jamaican accent (which was actually reasonably convincing). He followed in the tradition of lewd songs such as Max Romeo's Wet Dream. He had several hit singles in the UK during the early seventies, making him the biggest-selling reggae artist in the UK apart from Bob Marley, incredibly. What was also notable that his naughty nursery rhyme reggae hits were all banned by the BBC and many other radio stations. Hughes had been an employee of Trojan Records in London as a debt collector. Somehow he managed to convince them to let him do some recordings. The backing on all his songs was played by bona fide Jamaican musicians, a lot of them recorded in Jamaica. For me, as a schoolboy, Dread's often puerile songs were tailor-made and, also, they provided some of my earliest reggae memories. Along with Desmond Dekker, The Pioneers, Greyhound, Nicky Thomas, Bob & Marcia, Dave & Ansil Collins and Jimmy Cliff I was listening enthusiastically to Judge Dread. Listening to this is one big nostalgia trip for me. I used to play these songs to my mother, hoping to shock her. She thought they were hilarious, which is another fond memory for me.
The songs don't require too much analysis. The hits were Big Six, Big Seven and Big Eight. Big Nine didn't chart, but Big Ten did. A favourite of mine was always Dread's cover of Lord Kitchener's bawdy ska number, Dr. Kitch, a 'medical' song about a girl who didn't want to receive her injection. Hmmm. He also covers Elton John's Jamaica Jerk Off, adding some new, naughtier lyrics. 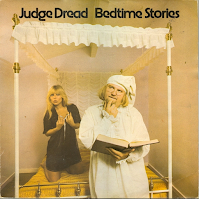 His cover of Mike Sarne's sixties hit Come Outside is as you would expect it to be and a similar tale of failed seduction is told on the childish but amusing for an overgrown schoolboy such as myself Will I What?. Doris Day's Move Over Darling is also given the Dread treatment, along with Serge Gainsbourg/Jane Birkin's Je T'Aime...(Moi Non Plus). Bring Back The Skins is a strangely nostalgic song about the glory days of the skinhead sub-culture that latched on to reggae.

The music is largely in the "early reggae" style of the early seventies with some ska influences. You have to say that the influence Judge Dread had on eighties two tone ska band Bad Manners is obvious. There is also a music hall rudeness to Dread's delivery that Ian Dury would use on his own Razzle In My Pocket and You're More Than Fair in 1978. Judge Dread unfortunately passed away at only 52. Here's to you, you dirty old whatever.