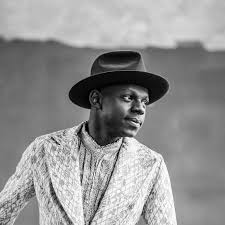 An artist that I have only recently discovered....
Tales Of America (2019) 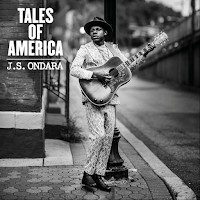 This is an excellent debut album from Kenyan-born J.S. Ondara, now settled in the USA. Ondara has a light, almost falsetto voice that sounds so female, that upon first listening I immediately said "Tracy Chapman". The comparisons do not end there, either - the evocative acoustic guitar strummed backing, the meaningful, socially-aware lyrics and the very soulful delivery in the vocals. There are also hints of Bruce Springsteen's acoustic work too. On the cover he looks like a 1920s-30s bluesman with the hat and the black and white photograph.

The songs are largely Ondara's observations on life in the USA as an African immigrant. You would imagine, these days, it may be a long litany of nightmare tales of discrimination and prejudice. Strangely enough, however, Ondara seems surprisingly upbeat and positive on many occasions. Not all, there are still some hard-hitting lines, but there is more optimism than one may have expected. Let's hope everything goes well for him.
The opener, American Dream, is lovely, with a great vocal and lyrics, crystal clear acoustic guitar and some sumptuous violin. It is probably the album's finest track, along with the moving, emotive Saying Goodbye.
Other highlights are Torch Song, Days Of Insanity and the beautiful Give Me A Moment when J.S. sounds just like Tracy Chapman, albeit an male, African one. The best part of the album is its stunning first four tracks, and I have to say that in the final seven tracks there is a little sameiness, just here and there. That is a minor thing, though, it is still an impressive debut from an artist who I guess goes into the "new folk" pigeonhole.