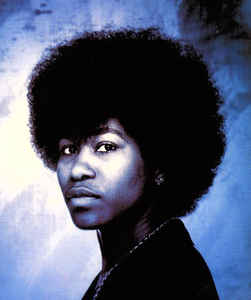 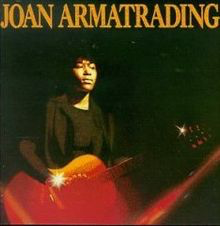 This was Joan Armatrading’s third album. Upon its 1976 release, nobody had heard of her. After, a few weeks, lots of people had. This appealing mix of acoustic folky rock made the artist a well known, credible mane, and the album became a dinner party favourite.

The opener, Down To Zero, gives it a great start, a staccato acoustic rhythm and full band backing and some killer lyrics and ambience.
Help Yourself continues the laid back acoustic feeling mixed with occasional full band power backing and Joan’s versatile, infectious voice, at times soul deep then beguilingly high.
Water With The Wine is almost funky at times, but jazzy too. Then, of course, we get the big one - the sumptuous, timeless Love And Affection. This was the hit single, the track that made everyone sit up and take notice. Nobody disliked it, it seemed, it garnered full praise across the board. When Joan sings the first line - “I am not in love, but I’m open to persuasion” one is hooked. The wonderful backing kicks in and her voice does all sorts of things. Then the saxophone. A true classic. 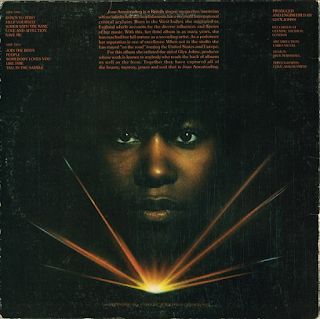 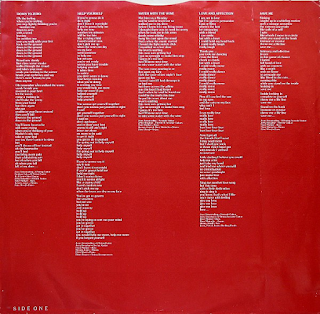 Similar vocal agility is demonstrated on the beautiful Save Me. A point has to be made also about the quality of the music. This is often thought to be an acoustic album. It is not. There is string orchestration and often a powerful rock drum backing, Save Me has all those things, while Join The Boys has a great bass/drum/acoustic guitar intro. This is actually quite a heavy track. Impressive stuff. On the album in general there is some inventive, clever music.

People has that staccato jazzy groove that Armatrading would often use over the ensuing years.
Like Fire is in the same vein, with a rumbling, thundering bass line too. One of the album’s best tracks.
Somebody Who Loves You is a lighter, romantic number. Tall In The Saddle is a powerful closer, with a searing, unexpected guitar solo. Forty-odd years later, this album has not dated. Many good albums ensued, but, as with many artists, it is is this, one of their relatively early albums that they never bettered. 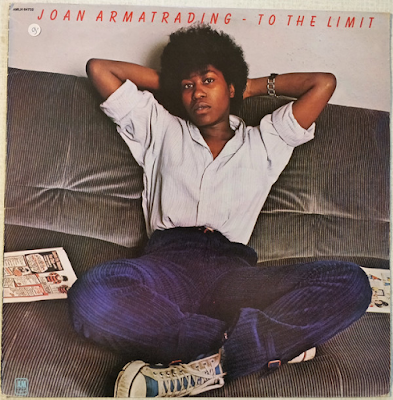 This was the third in the credible trinity of albums between 1976 and 1978 that made Joan Armatrading an artist beloved of the cognoscenti. It was the least successful of the three, however, and it seemed that amongst all the punk, new wave and disco, Armatrading was getting a bit overlooked. Her career was revitalised two years, though, with the pop/rock of Me Myself I, but, for me, you can’t beat the understated, sensitive and sensual appeal of these three excellent albums. I remember late nights as a student listening to this in my then girlfriend’s room back in 1979-80. Joan’s songs are often so “break up” oriented, I almost felt I should split with my girlfriend in order to relate to the album! Or at least fabricate a row.

You might expect Barefoot And Pregnant to be a maudlin song, but it is far from that, musically, being shufflingly upbeat and quite infectious. Joan’s voice is excellent on this one, its up and down tone suiting the staccato nature if the song’s beat.
Your Letter is a typical slow, emotive and impossibly moving Armatrading ballad. It features a sumptuous saxophone solo too. 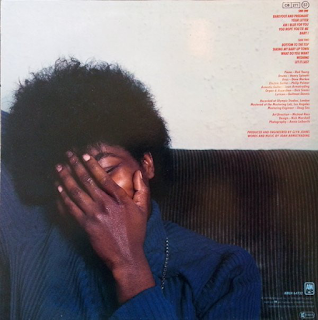 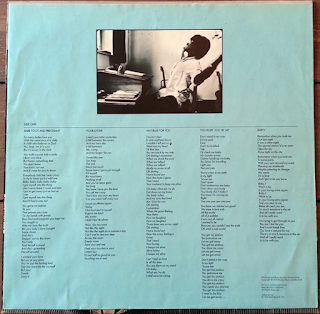 Am I Blue For You is a mix of slow blues guitar and chunky guitar riffs over a soulful, brooding vocal. There is a nice bit of spacey, jazzy instrumentation half way through followed by a killer guitar solo. This is a song that builds on the traditions of the 1976 breakthrough Joan Armtrading album.
The same applies to the deep soul/jazz of You Rope Me You Tie Me, which also features some fine piano/drum interaction on the faster paced parts. Lyrically, it sees Joan sticking it to a lover who seems to have numerous faults. You tell him.

Baby I is just lovely, a saxophone-enhanced beautiful soul ballad with Joan’s vocal range on full show. This is Joan Armatrading at her very best. The end of the song has a Love And Affection vibe about it, all saxophone and soaring vocals. Joan has always done a reggae-style number well, and she does here with the slow,  catchy shuffle of Bottom To The Top.
A surprise is the frantic, rocking fun of Taking My Baby Up Town, which is full of Mark Knopfler-esque rock guitar, swirling organ and an almost rockabilly beat. I love this one, I always did.

What Do You Want? is another 1976-ish Love And Affection-style slow acoustic-driven groove. Man, it is simply beautiful. Nobody does this sort of thing better than our Joan.
Wishing is a bluesy, acoustic, plaintive, minimalist ballad. It breaks out eventually to be a dignified, almost anthemic number.
That old 1976 acoustic vibe is back again on the final track, Let It Last. Joan had a real skill in building up a song from quiet, understated beginnings and turning them into uplifting anthems. She does exactly that here. Check out that beautiful tenor saxophone half way through before Joan comes back in. Take us to Heaven, Joan. “I’ve got no money if you want it...” was such a typical Joan line too. Great song. Great album. Great artist. 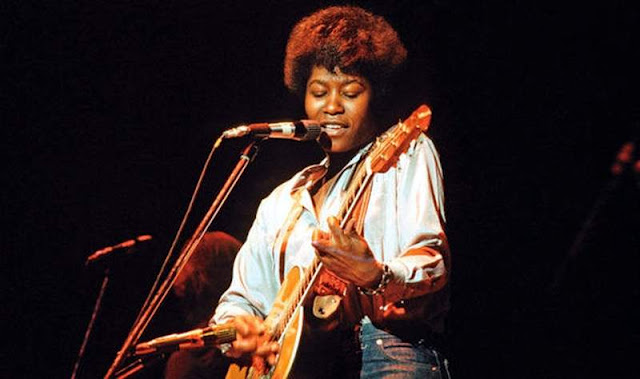 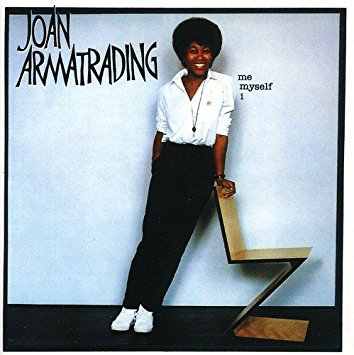 Me Myself I/Ma-Me-O Beach/Friends/Is It Tomorrow Yet?/Turn Out The Light/When You Kisses Me/All The Way From America/Feeling In My Heart (For You)/Simon/I Need You
Great memories of a great album from 1980. After the folky, acoustic feel of her earlier album Joan Armatrading in 1976 and the same groove continued on a few subsequent albums, Joan Armatrading introduced a more rocky, electric guitar based sound for this outing.

The single most people know, Me Myself, I is a great start and the standard is continued through the funky Ma-Me-O Beach and the rocking Is It Tomorrow Yet?.
Turn Out The Light implores a listener to do just that (if in company!) and indeed that brings back some good memories for me of those times. The heartbreaking I Need You and A Feeling In My Heart (For You) even more so.

All The Way From America is another sad, acoustic-driven one. Then there is the funky When You Kisses Me. Some upbeat, good time stuff on here but some emotional tear jerkers too.

For me, just lovely memories of student bedsit days. Thanks Joan. 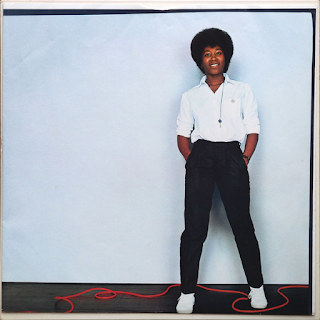 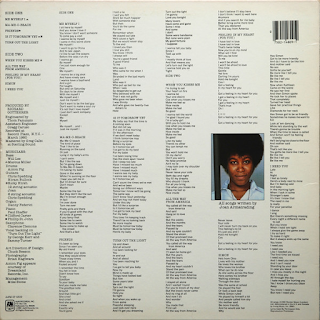 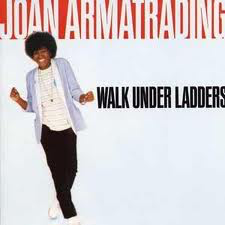 Following on from the success of Me Myself I, this Steve Lillywhite-produce album employed, at times, a somewhat stripped back, synthesiser-backed sound. It was quite a different product to, say, 1976's Joan Armatrading album, barely an acoustic guitar around this time. It is probably Joan's rockiest album and she uses a host of well-known musicians scattered around on various tracks such as Robbie Shakespeare (bass), Mel Collins (saxophone), Thomas Dolby (synthesiser), Andy Partridge (guitar), Ray Cooper (percussion), Sly Dunbar (drums) and Rico Rodriguez (horn). Unsurprisingly, the instrumental quality is high throughout the album.

I'm Lucky, the opener, is a stark, sparsely delivered synthesiser-backed song with a plaintive vocal and atmosphere. It works, though. There is a quiet power to the song.
When I Get It Right has a laid-back reggae backing to the verses gives way to a crashing, saxophone dominated belter of a chorus. A good start with these two that sets the tone of the album.
Romancers continues it with a most appealing, summer reggae rhythm introduces this pleasant song and backs all the verses, just as on the previous track. Some melodic Rico Rodrigeuz horns back the chorus, some nice harmony vocals and another convincing lead vocal from Joan. 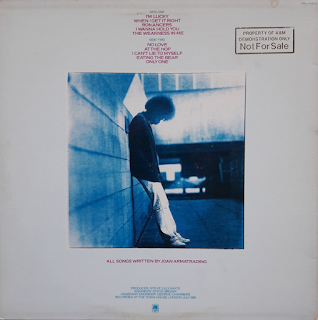 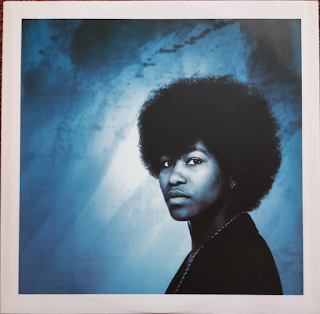 Now for more of a rocky sound - I Wanna Hold You features a Me Myself I guitar intro in a bit of a remake of that track, to be honest. Not that it's bad, though. An upbeat, thumping rocker. An excellent guitar solo at the end.

The sublime The Weakness In Me is the album's romantic cornerstone. A simply beautiful love song, sung hauntingly against an understated piano and bass backing. One of Joan's best ever vocals - deep, yearning and moving.
No Love is possibly the best upbeat track on the album, though. A solo electric guitar introduces the slow, mournful build up into the chorus with its great line - "if I had no love to give I wouldn't give it to you" - and a soaring saxophone from Mel Collins. Wonderful track.

At The Hop sees a slice of reggae/funk, with a few tiny hints of dub reggae in places, under the surfaces, as if there is such a thing. It just sort of drifts along, though, without ever really getting anywhere. A bit of storming guitar work at the half way point though. Listening to it again, though, it does tend to grown on you. The reggae groove continues, I Can't Lie To Myself has some convincing, authentic reggae rhythms from Sly Dunbar and Robbie Shakespeare. Another track that gets into your system, given time. Joan is capable of adapting her vocal to whatever backing she is given. Here it seems the perfect fit for this summery reggae number. She even puts a bit of falsetto into the chorus.
Eating The Bear is perhaps the "filler" track on the album. A pounding mid-pace rocker over a frantic reggae guitar with lyrics that claim "some days the bear will eat you, some days you eat the bear". Again, though, the chorus tends to stick in the mind.

With Only One, as the album had started, it also ends with a sombre, somewhat bleak synthesiser-backed mournfully-delivered song. While the opener had the optimistic "I'm Lucky" theme, this was a laid-back song of devotion to a lover. A smoky, low key end to a good, but never truly outstanding album. 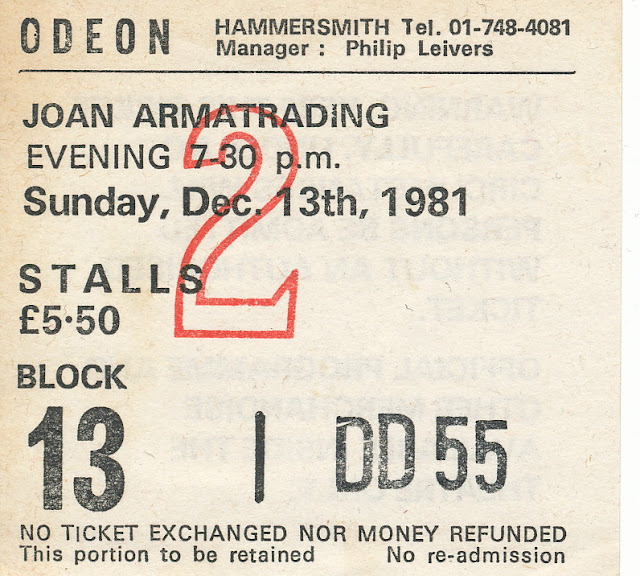 Shine - an upbeat, guitar and cowbell riffy rocker. Nothing particularly special about it but it is probably the equal of Eating The Bear. Dollars - again, some convincing rock guitar and rock vocal from Joan on this competent chugger. A few skanking reggae guitars in the background in places.
Crying - now, this is definitely the one that should, undoubtedly have either replaced Eating The Bear or been aded to the album. An alluring mid-pace reggae rhythm and a seductive organ backing together with a great vocal from Joan. A nice romantic number, my only criticism of which would be that it just fades out too soon, just as I am getting into the groove. 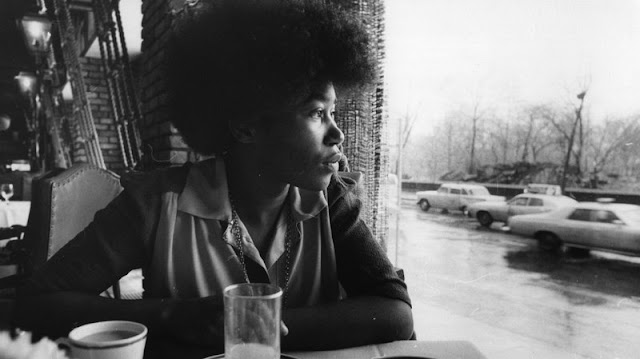