Jimmy Cliff was one of the great late sixties-early seventies reggae artists, along with Desmond Dekker....
Reggae Greats 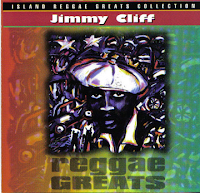 ....they were the voices that were on several of the huge hits that had that "reggae with strings" production that commercialised reggae and brought it to the charts. The importance of reggae's pop breakthrough here cannot be over-estimated. It paved the way for Bob Marley to make reggae credible. To dismiss this material as mere pop chart fare would be wrong. It is feel-good music of the highest order. It brought Jamaican music into the UK mainstream and is hugely culturally important because of it.

The highlights are the iconic The Harder They Come, used to great effect in the movie of the same name; the singalong Let Your Yeah Be Yeah; Cliff's cover of Desmond Dekker's You Can Get It If You Really Want; the unusually serious Vietnam; and two songs that actually don't contain any real reggae rhythms - the melodious, soulful Sitting In Limbo and the moving, evocative ballad Many Rivers To Cross. All quality stuff.