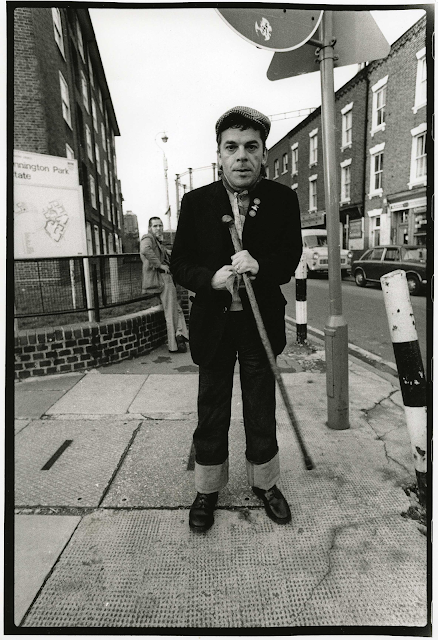 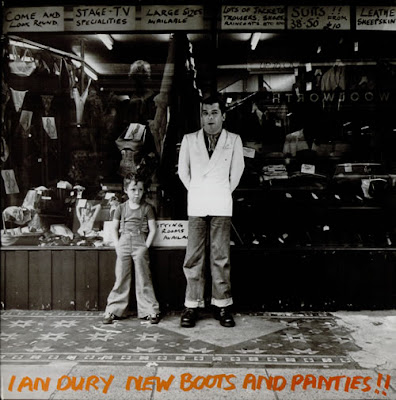 Wake Up And Make Love With Me/Sweet Gene Vincent/I'm Partial To Your Abracadabra/My Old Man/Billericay Dickie/Clevor Trever/If I Was With A Woman/Blockheads/Plaistow Patricia/Blackmail Man
The Dickensian Ian Dury cut an odd figure in the punk-new wave explosion. Firstly, he was already thirty-five and had been around the block, so to speak, secondly, his influences were far more soul, reggae, funk, traditional cockney music hall and even disco than rock or punk. Indeed, his attempts at breakneck punk haven't aged well and now sound somewhat clumsy and archaic. It is his funkier, witty numbers that still carry an appeal.
Anyway, on to this cultish album - originally released in September 1977, Ian Dury's impressive debut that saw new wave meet music hall vaudeville has now been nicely remastered to celebrate its 40th Anniversary.

I'll deal with the extra material first, if you will bear with me. As well as the original album sounding nice and clear, there are lots of demo versions, the sound quality of which is, on the whole, excellent. Some of the ones that didn't make it on to the album are better than others, however, notably Close To Home and the funky Sink My Boats. The spoken poem, Two Steep Hills is not something I really want to hear again, and the same applies to Apples (yes, it is about apples), the awful Tell The Children and the more than just a little creepy I Made Mary Cry.
The demos of Wake Up and Blackmail Man have different lyrics - the former far more naughty. My Old Man is pretty much the same, but I much prefer the demo version of If I Was With A Woman and I'm Partial To Your Abracadra to the originals. Something crisper and sharper about the cymbals. Great guitar on If I Was With A Woman too.
Clevor Trever and Blockheads are good versions too. The instrumental version of Sweet Gene Vincent is interesting, but I keep expecting to hear Dury start singing. 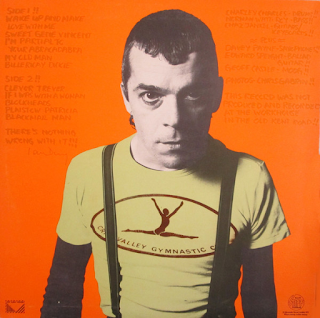 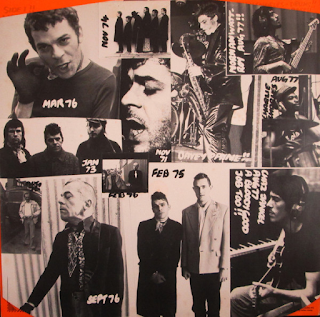 Bonus tracks include the now iconic Sex & Drugs & Rock 'n' Roll, the amusing Razzle In My Pocket and the tender, but saucy You're More Than Fair. There is also a raucous, rough and ready live recording from Dury's days with Kilburn & The High Roads, in England's Glory, which is packed with many cultural references. I prefer the studio "demo version" of it though. I have to say the melody owes a lot to Ray Charles' Oh Lonesome Me, however.

The second disc has some excellent live material from a concert at London's Paris theatre in July 1978. I saw Dury on the same tour so his brings back great memories. Nice to finally have some live stuff from a time when Ian & The Blockheads were at their peak. I saw Dury three times at Friars, Aylesbury (posters below). For more information on Dury at Friars, Aylesbury, check out https://www.aylesburyfriars.co.uk. 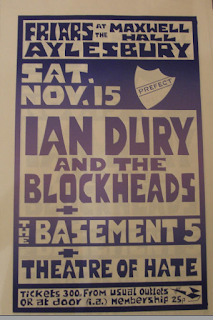 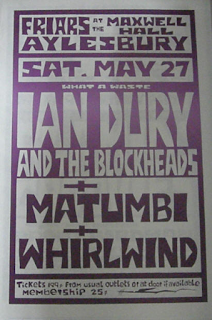 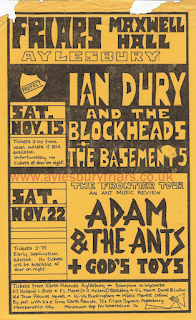 Oh, how I digress, I haven't talked about the original album yet! Of course, it is jam-packed with Dury classics - the amusing and tuneful Wake Up And Make Love With Me; the upbeat, joyous rock n roll thump of Sweet Gene Vincent; the funky, appealing I'm Partial To Your Abracadabra and Dury's tender song about his father, My Old Man.

Billericay Dickie is an affectionate piece of music hall-influenced nonsense. Clevor Trever is another semi-funky, organ-driven slow burner featuring Dury's best cockney vocals.
If I Was With A Woman a sad yearning little ditty, with its "look at them laughing" pathos in its self-deprecating lyrics. Blockheads and Plaistow Patricia (with its shocking vocal intro) are two cacophonous belters with Dury ranting about blockheads and poor old slapper Patricia. Blackmail Man ends the album in even more frenetic, shrieking nature.

This album is great fun, basically. Nothing more, nothing less. It stands as a complete one-off - not punk, not new wave, occupying a position all of its own.
This version is a good one to own because of all the extra material. 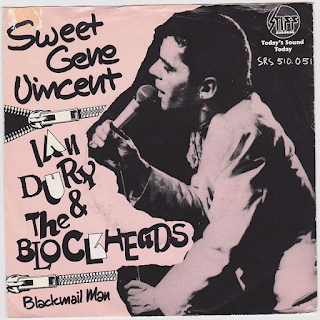 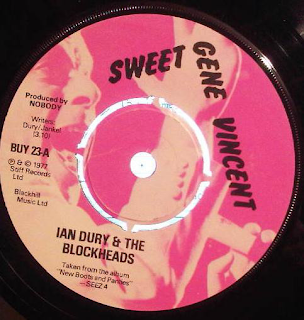 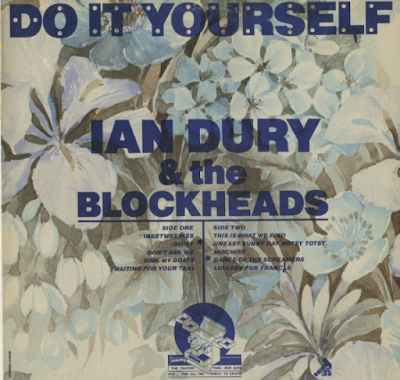 After the unique punk meets music hall winning debut that was New Boots And Panties, this follow up saw Ian Dury and The Blockheads very much getting into a white disco/funk mode, eschewing practically all the punk stylings of the previous album. I guess if there ever was such a thing as pub rock disco, or new wave disco, this was it. Apparently Dury was a nightmare to work with during the sessions for this album, success having gone to his head, legend would have it. Maybe it was the case because there is something indiscernable about the album that leaves it lacking the charm, wit and vibrant joie de vivre that its predecessor had. It just doesn't really do it for me in the way that "Panties" did. That is not to say it a bad album, though, it certainly has a few moments. It is probably pertinent to say, however, that Dury didn't produce any other albums of real note after this (although his fans would no doubt disagree), commercially there certainly weren't.

Inbetweenies has that quasi-disco/jazz funk piano coda that seemed to populate a lot of Dury's output at this time, married to Dury's music-hall, wry delivery. It was sort of the album version of the hit singles Hit Me With Your Rhythm Stick and Reasons To Be Cheerful, Part 3 (both of which are included on the deluxe edition of the album. It is a good track though, with excellent saxophone and bass too.
Quiet continues down the same new wave-y disco groove road as well. A sort of prototype rap with Dury semi-speaking his diamond geezer lyrics about his small child, exhorting him to be quiet. The instrumentation, as always from The Blockheads, is excellent, a shuffling sort of funk with some madcap saxophone swirling around. 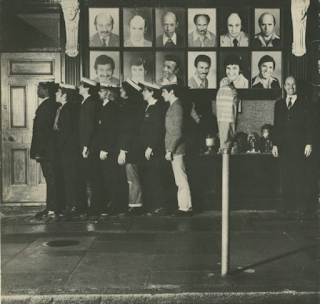 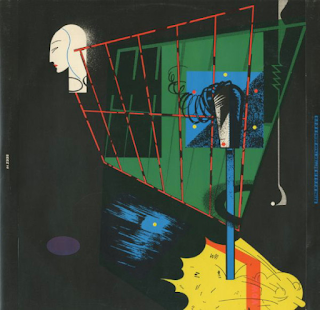 Don't Ask Me is another piece of urban white funk. It is perfectly listenable, but somehow, for me, the novelty of the first album doesn't quite repeat itself on this one, despite the quality backing. That is a little bit unfair, but much of the album ploughs the same furrow.
Sink My Boats has vague punky hints in places, but there is still a solid funky guitar riff underpinning it and some disco synthesisers.
Waiting For Your Taxi is a brooding, sonorous somewhat dirge-like grinder. This Is What We Find is a very Madness-esque number, even down Dury's Suggs-style vocal on the chorus. There is a good dubby bit in the middle too. By the way, the rear cover is also very Madness-inspired. 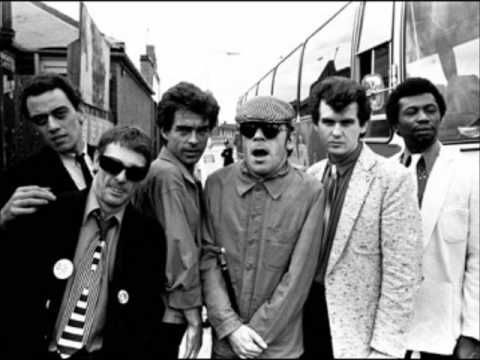 Uneasy Sunny Day Hotsy Totsy is just a bit of a mess, really, despite a bit of quirkiness. Mischief tries to recreate that Blockheads frantic atmosphere, but doesn't quite get there. The vocal is barely audible for a start, at times.
Dance Of The Screamers has a perfect Chic-style disco rhythm with an intoxicating bass line. Lots of bands started putting this sort of thing out at the time, trying to get in on the disco thing without alienating their punk fanbase. The Jam's Precious is an example, and The Clash's Magnificent Seven. To be fair to Dury, he was doing this in 1979, not 1981. It is one of the best tracks on the album, I have to say. It does use quite a bit of the Rhythm Stick piano and bass though.
Lullaby For Franci/es starts with a ridiculously loud and incongruous brass intro before easing into a new wave white reggae beat. It is actually not a bad one to end on, slightly different to most of the others.

What A Waste was a great single and is included in the deluxe edition. Although this album is reasonable, none of it matches the three hit singles. There is nothing that sticks in your mind in the way that they do. I rarely return to this album, maybe I should do more, in fact I will resolve to do so. It probably deserves it. 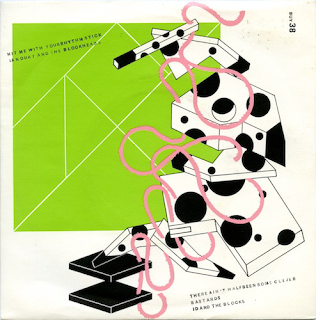 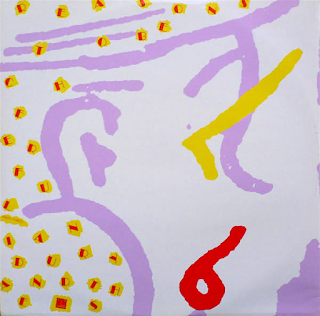