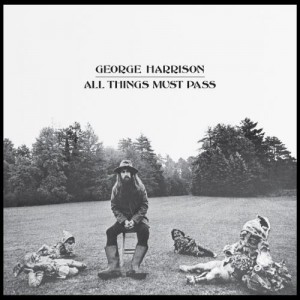 George Harrison’s bloated triple album, from late 1970, certainly out-did McCartney or The Plastic Ono Band. It was a huge achievement in many ways, as Harrison managed to blend his increasing spiritual devotion and motivation with some good, accessible rock music. Personally, though, I have always found the album to be a half-good, half-bad frustrating one. I have problems with the sound and production, which I will refer to as the review progresses.

The opener is a laid-back, somewhat sleepy and solemn collaboration between Harrison and Bob Dylan in I'd Have You Anytime. It has beautiful parts, though, and a beguiling vocal from Harrison. Then came My Sweet Lord, known all around the world now. Its iconic acoustic and slide guitar intro is just so nostalgic. It is the dark afternoons of late 1970 again. Lyrically, of course it tapped in to the zeitgeist of religious experimentation and searches for spiritual peace that pervaded the beginning of the seventies. I loved it then and still do, however. So evocative. 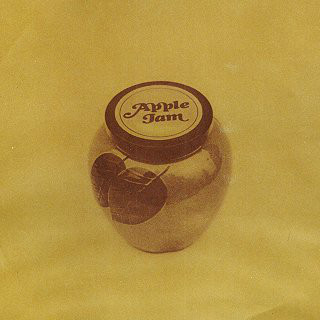 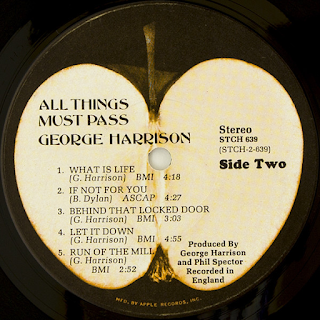 Wah-Wah has some excellent guitar, but the mushy drum sound and generally crashing backing spoils it. There is a horn riff in there somewhere, but even on this supposedly remastered version it is difficult to hear properly, which is such a shame. The production has, in my opinion, always been awful on this track. Harrison was searching for a Spector-esque Wall Of Sound, indeed, using Spector himself to help him out on the production, but in many respects it just ended up as a muffled, trebly wall of frustration. For me, anyway. It is nigh on unlistenable. In many respects it is the worst track on the album. Many others are sonically much better.

The next track, though, the impressive and lengthy Isn't It A Pity (rejected as a Beatles track as far back as the Revolver sessions, incidentally), restores the quality. It has a rich, warm bassy sound, particularly when the drums kick in. Harrison’s vocal is haunting and plaintive and overall, the track is very atmospheric. Lovely strings merge with Harrison’s guitar half way through. It should have ended at around five minutes though. Oasis surely took bits of this to influence their Be Here Now album.

What Is Life is excellent. Vibrant and lively, with airs of mid-sixties Beatles and a catchy hook. It suffers a little from the Wah-Wah production gremlins, however, (the horns are buried under the wall of sound) but I still enjoy it a lot more than Wah-Wah. It would have made a good single. Great guitar riff on it, particularly in the intro.

Dylan’s If Not For You is delivered in a beautiful, steel guitar country rock style. Harrison’s voice suits it down to the ground. He even seems to be trying to imitate Dylan at some points.
The country rock groove continues with the melodious, once again steel guitar dominated country-ish vibe of Behind That Locked Door. There is some good sound quality on this one. No wall of sound = great sound - on this album at least (and I am a sixties Spector fan).
Let It Down again starts with some cacophonous noise, but settles down into a reasonable track. Harrison sounds almost like Lennon in places and the drums are very Starr-like. It is a track that I enjoy for half of it while the other half irritates me, I’m afraid. It ends raucously. For that reason, so much of this album is, for me, unrealised potential. 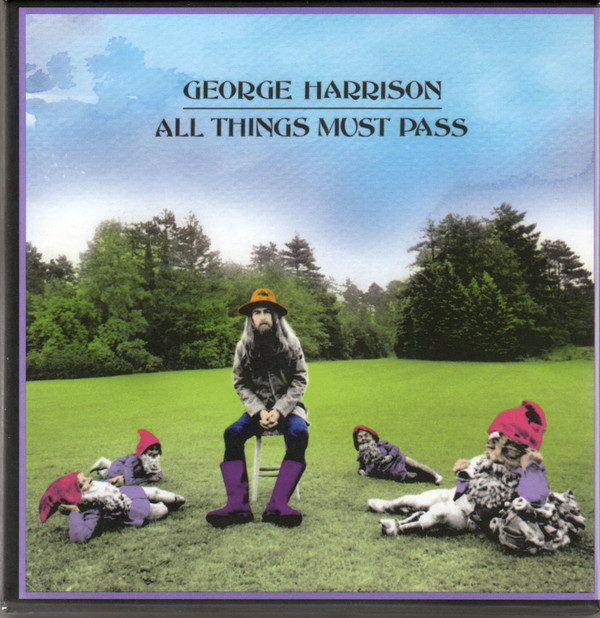 The next track, Run Of The Mill sees a great improvement, however. It sounds clear, Beatles-ish and is much more of a pleasure to listen to. Excellent clear drum and guitar sounds on it with a warm, vibrant bass too and a stronger vocal from Harrison. Beware Of Darkness starts the old “side three” and is a nice one. Great sound on it again, a mysterious vocal and a generally beguiling, Dylanesque ambience. Harrison’s strange accent “take curr, bewurr” is odd, though, listening to it now. Scousers don’t talk like that anymore. It is more "take caiiir” now.
Apple Scruffs is a light but appealing throwaway, with some Lindisfarne-style harmonica. Enjoyable but dispensable. Ballad Of Frankie Crisp (Let It Roll) is interesting. Chugging and powerful in its pounding drum and funky piano sound. Harrison’s vocalists somewhat distant, however. The track never quite gets there, in my opinion.
Awaiting You All sees a return to an unclear muffled sound. Somewhere beneath that murk lies a fetching, lively song. Spoilt again, unfortunately. 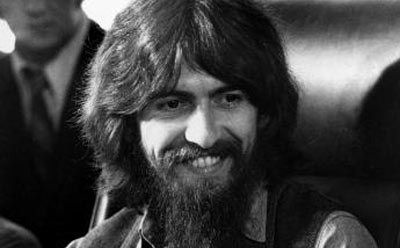 All Things Must Pass (another one rejected for The Beatles) is an improvement. It is a little bit murky in the production, with Harrison’s voice too far down in the mix, though. Maybe it just revealed weaknesses in his voice, thinking about it. The “big’ sound tended to drown him out.
The extremely Lennonesque I Dig Love is one of my favourites, however. I like the catchy and potent drum and piano “riff” bit that underpins it. It reminds of me of David Bowie's "Heroes" album in places (the piano).

Art Of Dying suffers from the sound thing again, but it sort of works on this one. Not quite sure why. At the same time, I still can’t hear those horns properly. Nice bit of guitar work half way through though. The second version of Isn't It A Pity is actually my preferred version, shorter and more nuanced.
Hear Me Lord is another good track in a late sixties Beatles slowed-down bluesy rock stye. There are hints of Pink Floyd on here, for me. Maybe they listened to this while writing Dark Side Of The Moon. It certainly sounds like it in places.

** The plaintive bonus track I Live For You is similarly appealing and, again, very, very Beatles in its sound and ambience. Harrison’s slide guitar comes into its own on here. A pity it wasn’t on the original album.

Of course, there are also the Apple Jams which took up the old sides five and six. Did anyone play them much at the time, I wonder? Or indeed, do they now? Actually, Out Of The Blue is quite enjoyable, as are most of them. Certainly the sound quality is much more tolerable on Out Of The Blue - a really clear guitar sound. The piano/guitar bit at six minutes sounds very Rolling Stones on 1974’s Fingerprint File - the link being Billy Preston. Eight minutes in and I’m still enjoying it. Plug Me In is a rocker, and most enjoyable. Big, punchy and bassy.

So, in conclusion (my review has been as sprawling as the album itself!) this is an album which contains around four tracks that were, in my view, produced to death and suffer for it. The wonders of digital technology means I can select the others at times. When I do so, I have a more enjoyable album. The sad thing is, due to these production gripes and its bloated size I find I listen to McCartney more than I listen to this, which is a shame. Isn’t it a pity. 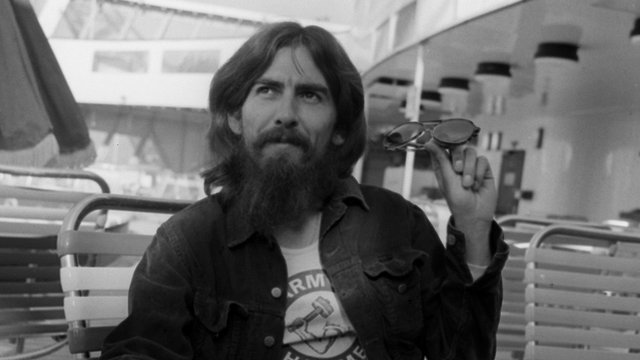 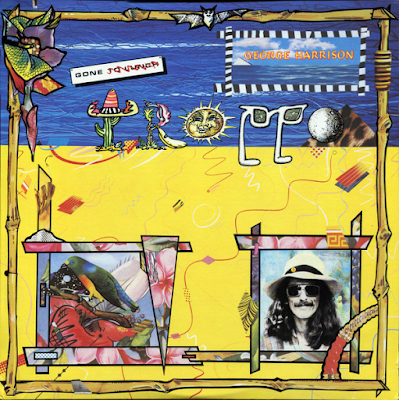 Wake Up My Love/That's The Way It Goes/I Really Love You/Greece/Gone Troppo/Mystical One/Unknown Delight/Baby Don't Run Away/Dream Away/Circles
They were funny things, George Harrison albums. After the mammoth offering that was 1970's All Things Must Pass, he seemed to put out an album every three to five years, and it always seemed to me as if he did it because he thought "I was in a band once, I'm a musician, this is what I do...". In the meantime, he explored his other hobbies away from music - movies producing, car racing. mysticism. As more and more years went by since Harrison had been in the Beatles, the less I, personally, viewed him as a musician putting out regular work. Many times I found myself almost forgetting about him, even Ringo was more in my consciousness. So, when this album came out, in 1982, it was a virtual irrelevance. Punk had been and gone, post punk, new wave, two tone, new romanticism were all around. Harrison suddenly remembered he was a musician and collected some old friends - Ray Cooper, Dave Mattacks, Billy Preston, Herbie Flowers, Gary Brooker and Syreeta among others and produced a laid-back summery poppy album full of the synthesised backing that so blighted the eighties. It was a sort of contemporary Beach Boys, lazing in the sun sort of thing that attracted a lot of critical opprobrium.

So, lets listen to it and see if it was as bad as they all said.

Wake Up My Love is a lively slice of synth-driven pop, with a vague appeal. Harrison's voice sounds remarkably like Traveling Wilburys mate Jeff Lynne on this. It is by far the album's most upbeat and accessible track.
That's The Way It Goes features some typical Harrison My Sweet Lord high-pitched guitar and a mid seventies Beach Boys vibe about it. Actually it is not a bad track at all, in a light, airy sort of way.
I Really Love You is a catchy fifties "doo-wop" pastiche that would have been fine in 1962, as opposed to 1982. Greece is a pretty throwaway, light poppy number. Material like this and the slightly feeble Gone Troppo were really quite unimpressive. 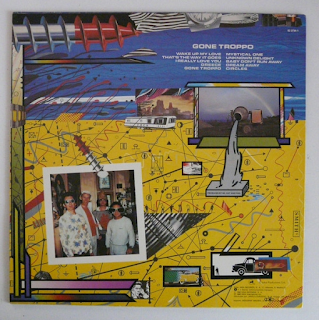 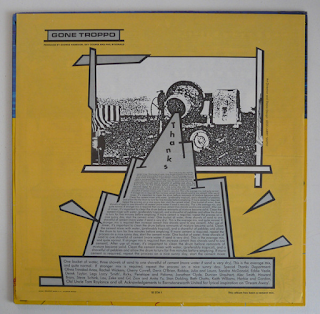 Mystical One is a laid-back slightly Lennon-esque easy listening slow rock song. Again, it is very much like the stuff The Beach Boys released in the mid-late seventies. Both they and Harrison had seen better days.
Unknown Delight also has a Lennon feel to it, a nice bass line and a mournful-sounding vocal from Harrison. Baby Don't Run Away is a bit Beatles-ish but also a bit unmemorable. Oh I guess it's nice enough, I suppose. It just doesn't stick in the mind.
Dream Away is another very singalong pop number with a few hidden Harrison-esque bits scattered around here and there.
Circles is a typically Harrison plaintive, Beatles-style ballad. His voice, while never great, always carried a bit of a sad quality to it. Harrison would not release another album after this for another five years, popular mythology suggests it is this album that put him off, seeing him lose his muse. We'll never know now.

It is all pleasant enough, with Harrison playful and relaxed as opposed to serious and mystical, but completely culturally inessential when it was released. This album passed me by in 1982, but I can't imagine it appealing to anyone much back then. Listening to it now, it is not as pointless as it would have seemed then, though. It now stands as a bit of a curio. Thoroughly out of time, but strangely interesting, just in places. Overall, though, it has to go down as "one for completists", but, whenever I come across one of those I feel compelled to give it a chance. To be fair, there are a fair few Paul McCartney albums that were certainly no better than this and, on listening to it again, it is growing on me, in an unthreatening, harmless way. 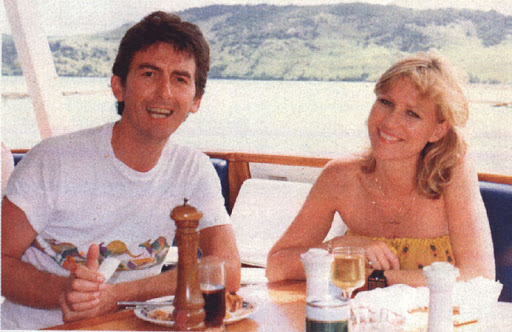