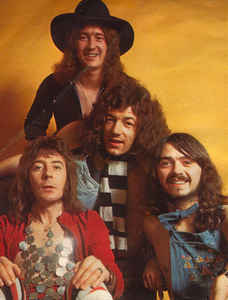 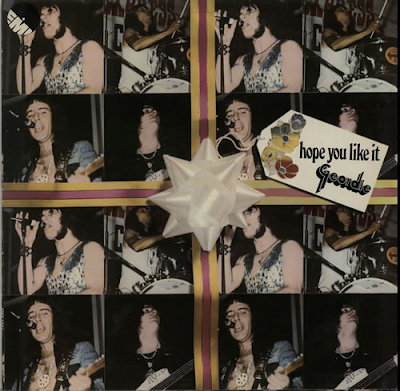 Newcastle's answer to Slade, Geordie, fronted by soon to be AC-DC lead singer Brian Johnson were actually, for a while better than many at the time gave them credit for. I remember buying this album as a schoolboy at the time and being incredibly ridiculed for it. I recall a boy who I didn't have much to do with coming up to me and saying "is it true you've got a Geordie album?". He asked as if I had been seen snogging my mother. The Emerson, Lake & Palmer fan was horrified. Not me. Give me this any day.

The opening track, Keep On Rockin', is far more like Nazareth than Slade, as indeed is Give You Till Monday. Both these track rock, big time. They are full of heavy riffs, thumping drums solid, muscular bass and Johnson's Ian Gillan meets Dan McCafferty whisky-soaked bluesy rock voice. Upon listening to these, at the time, I considered them "too heavy" for my young taste and stuck to my Mott The Hoople, Slade, T. Rex and David Bowie. Quite why boys who were into Deep Purple didn't like this is beyond me. It is actually quality rock.
Hope You Like It is a rumbling blues rocker with some very Ian Gillan-esque high vocals from Johnson, which somehow are unnecessary. His deeper vocals on the verses are much better. Incidentally, guitarist Vic Malcolm wrote all the songs on the album and, although a little cliched in the heavy rock style, lyrically, at times, it is a pretty impressive effort.
Don't Do That is pretty standard pub rock fare from the time, although its riff is very punky for 1973. The T. Rex-style "hey hey"'s and riffage date it as a glam hopeful track, however. 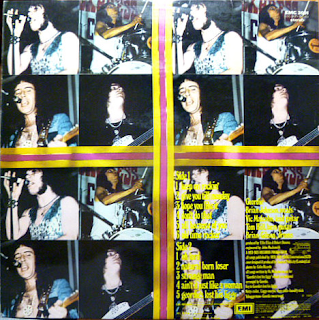 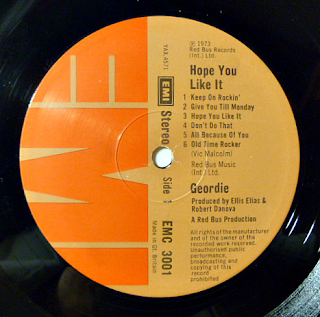 If All Because Of You isn't one hell of a glam rock track then I wasn't fourteen in 1973. It has great glam riffs and, of course a pounding drum sound and "hey hey hey" in the chorus. What more could you want?
Old Time Rocker has Johnson channelling his inner Elvis (and Buddy Holly too). It is a bit contrived but I am sure it got them on their feet in a Newcastle pub in 1972.
Oh Lord is a lachrymose ballad written by Malcolm when he was down on his luck a few years earlier. It kicks into a huge rock ballad half way through, with some killer guitar. At the time it was my least favourite, now I think it is the best cut on the album. 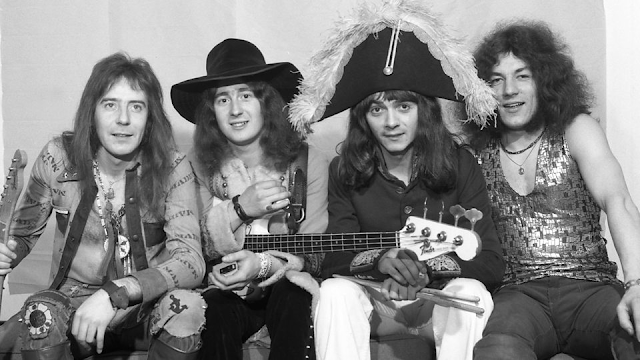 Natural Born Loser is a beautifully heavy Nazareth-style rocker with one hell of a bass sound and another copper-bottomed Johnson vocal. No wonder he got "head-hunted".
Strange Man is a Zeppelin-esque rocker, with those "aaah-aaah" vocals. Great stereo drum sound on the latest remaster. Ain't It Just Like A Woman, with its typical seventies rock title, and Robert Plant circa Rock And Roll vocals, is another highly credible heavy rocker.
Geordie's Lost His Liggy is a throwaway piece of country-influenced singalong fun, it is a traditional Newcastle folk song. Using one or two of the non-album singles would have been better inclusions, though.

You know, apart from All Because Of You and possibly Don't Do That (in parts) there is no glam on this album. It is all heavy rock with a poppy edge. It is not a bad album at all. Much like The Sweet's Sweet Fanny Adams album, this was a great heavy but poppy album. Sure, it is not an essential part of anyone's collection, but I am pleased to have revisited it after all these years, pleasantly surprised.

** The latest remastering includes the two follow-up minor hit singles, Electric Lady, the vaguely Slade-ish Can You Do It and non-hit Black Cat Woman (which sounds very much like Deep Purple's Strange Kind Of Woman) and a 'b' side, Geordie Stomp.