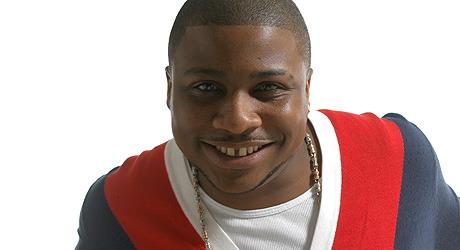 Digital and dancehall but mightily appealing reggae....
Put The Stereo On (2010) 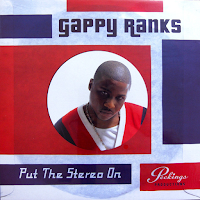 This is an innovative contemporary reggae album. Yes, it is digital in its basic rhythms and the singing is in that sort of rap-dancehall style, but the tracks are quite diverse in style and the lyrics are clever, observant and surprisingly thoughtful. Gappy Ranks, a British artist of Jamaican heritage has a an odd nasal voice and it is sometimes digitally enhanced and is something of an acquired taste, but there are certainly hidden depths to this impressive album. Also, Gappy's engaging smile makes it somewhat difficult for him to adopt any convincing "yard" poses.

Mountain Top is a rootsy, Prince Far I-style toasting number, although the backing is slightly more melodic and the lyrics containing a bit more wit to them, as opposed to simply expressing Rasta devotion. Heaven In Her Eyes has an upbeat, lively rhythm and a vocal that sings more than toasts, in Ranks’ afore-mentioned nasal tone. It is almost UB40-like in its catchy timbre and delivery. Put The Stereo On is an amusing toast about playing music at home. It abounds with reggae references - Alton Ellis, Studio One - and while it has that contemporary sound to the vocal, its tongue in cheek approach makes it a bit different.
Pumpkin Belly is a rootsy, incomprehensible skank with dancehall-style gruff Buju Banton-influenced vocals. It was originally recorded by Tenor Saw. Happiest Day Of My Life has a fast-pace beat that harks back to the poppy reggae of the late sixties-early seventies. It could almost be Desmond Dekker or Toots & The Maytals, save for the strange gurgly, underwater sound to Gappy’s vocal. Never mind, the organ and saxophone are straight out of the seventies. Musical Girl has a nice, deep thump of a beat to it and a laid-back melody. The voice is again doctored to give it a strange sound but after a while you get used to it.

Little Understanding is another Banton-esque song, with a well-meaning message in its lyrics. Thy Shall Love finds Gappy getting all righteous with a rootsy Rastafarian sermon. This is a real throwback to the classic roots era of 1975-78. It is good to hear. So Lost returns to the contemporary vibe with a deep, bassy dancehall beat and vocal. This continues on the vibrant rant of Heavy Load. The pertinent lyrics are balanced by a sumptuous brass backing and a great, rumbling bass line. Some excellent saxophone enhances the catchy Rude Boy. The album ends with an appealing dancehall cover of Bob Marley’s Soul Rebel. My reggae tastes are more towards the traditional - from ska through to lovers rock (60s to late 80s) - but, as more contemporary-style reggae offerings go, this is a good one, and one I enjoy the occasional play of.