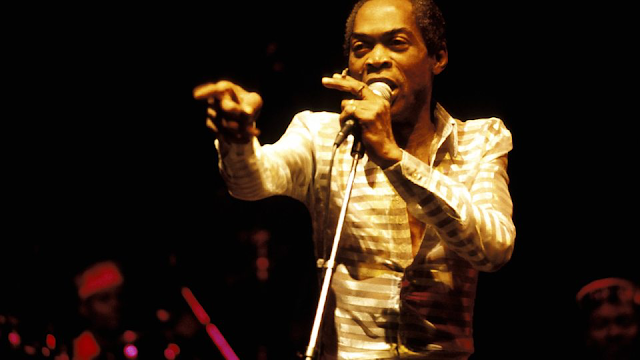 The Best Of The Black President 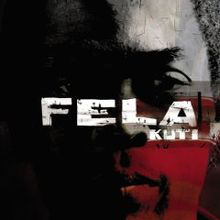 Fela Kuti was a remarkable musician who led a remarkable life. From his early days in London forming bands that played what would become his trademark groove of Afro-Beat to his militant anti-governmental corruption-inspired material in his later years in his native Nigeria he produced some simply incredible music. He was routinely ill-treated at the hands of the notorious Nigerian police, so his rants had considerable justification. He also had numerous lovers, something that some critics find disconcerting. Not this one - after all those police beatings he was due some pleasure.

Afro-Beat mixes the traditional, lilting West African (originally Ghanaian) sound with American urban funk rhythms to produce an exhilarating, intoxicating brew. Fela Kuti and his huge entourage of musicians completely mastered this sound, producing an "almost live" type of groove that often just went on and on. Fela and his band, often powered by the pulsating drumming of Tony Allen would get into a groove and just flow with it, the infectious rhythm underpinning the skanking-style guitars and Kuti's interjections on a blaring, often slightly discordant saxophone.

The tracks are all full of lengthy instrumental grooves, lyrics come in every now and again and are often in the form of protest about various issues, usually corruption. The bass lines are constant and captivating on every track and on most there are points where the rhythm quietens down, just keeping the beat up, with a constant, repeated guitar line, and then the saxophone kicks in then it is back to the full band, then it may quieten again. This can often go on for ten minutes, fifteen even twenty minutes or more. For example, on Lady it is six minutes before Kuti's vocal arrives.

Somehow, the music sums up its country of origin - Nigeria - chaotic, sensual, down 'n' dirty, effortlessly melodic, incredibly funky. Full of contradictions, sometimes frustrations, always invigorating and energising, however. The sound of downtown Lagos on a roasting hot, sweaty, dusty night. I have not been to Lagos, but I have experienced Nairobi in Kenya so I can feel it to a certain extent. There must have been a special atmosphere at his gigs. He has been gone over twenty years now, but there is a huge legacy of music left. This is as good a start as any, or any of the many albums (often containing only two tracks - one on each side) are recommended from this seminal African artist. 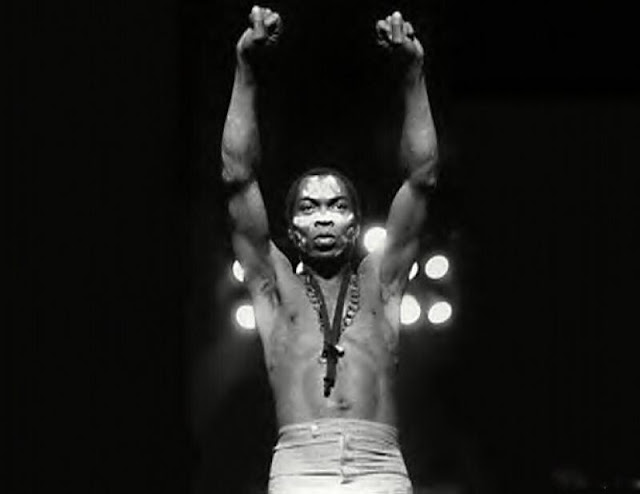 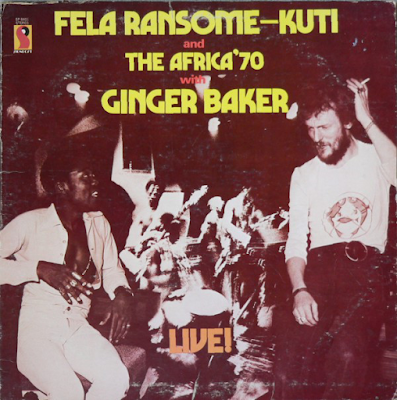 Baker had left behind rock music for a while in 1970 and hooked up with Kuti to travel around Nigeria in a Land Rover to find out more about the intoxicating drum rhythms of the continent, particularly that of Afrobeat. The notoriously irascible, "difficult" character that was Baker must have met his match in the charismatic and enigmatic Nigerian because things seemed to go pretty well and Kuti's long-time drummer Tony Allen praised Baker for being one of the only white, Western drummers who truly "got" the unique rhythms of Afrobeat. The resulting live album has achieved considerable critical kudos over the subsequent decades, regularly making those "essential live albums" lists.

The music is, as you would expect, a collection of extended grooves where Kuti and his outstanding Africa 70 group get into a rhythm and keep it going, punctuated by occasional vocals, punchy horn breaks and often intricate, addictive guitar and keyboard parts.
The first two tracks, Let's Start (check out the bass and overall superb sound on this one) and Black Man's Cry, do not feature Baker, the drumming is done by Tony Allen.
Baker appears on Ye Ye De Smell and Egbe Mi O (Carry Me). Whether he is there to try and attract a Western "rock" market is probably true to an extent, but you get the impression that Kuti is genuinely enjoying having him there. He states that the former track was written with Baker in mind. 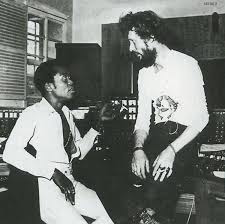 It is a bit of a surprise to me just how very rhythmic Baker is, taking the typical late sixties rock drum solo (which had almost blueprinted by Baker on Cream's Toad) concept to new levels on Ye Ye De Smell. It is certainly the most rhythmic drum solo that anyone had no doubt heard thus far. It is a masterpiece of intuitive, infectious, inspired drumming. Baker might have been many things - unnecessarily confrontation, often violent and insensitive - but his natural rhythm is never in question. Maybe John Bonham had the power and Keith Moon the energy and vigour but in many ways Baker proved here that he had it all.

The solo with Tony Allen is, at sixteen minutes, a tad lengthy, given that there are no horns or keyboards to enhance it, but the instinctive feel shown by the two drummers is mighty impressive. I have to say that is just sucks you in, though, the two of them are fantastic, let's be honest. How they keep it going for such a long time, with no apparent mistakes, is phenomenal. It isn't just two blokes bashing away, it is rhythmic drumming of the highest quality. It takes the drum solo to a higher plane (albeit there are two of them). The bit around twelve and a half minutes in is superb.

Apparently Baker came to be a drummer by accident (he preferred cycling at the time) but was persuaded to try drumming and found that he was a natural. That certainly comes across loud and clear on this excellent live album. It is certainly no wealthy white man's vanity project. 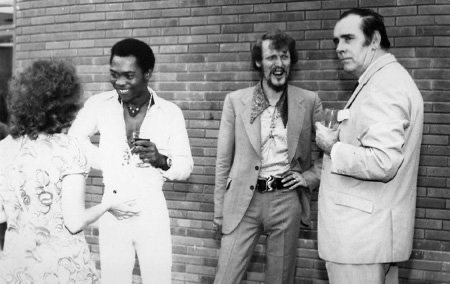 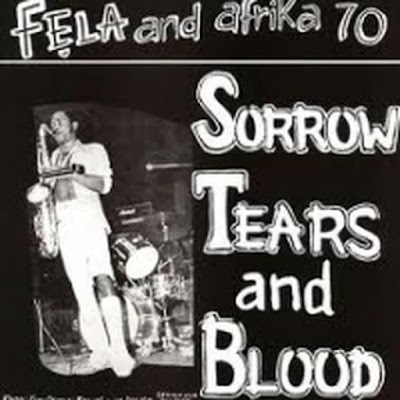 This two track album, from 1977, is one that slipped under the radar as punk, new wave and disco ruled the airwaves. It is regular Kuti and Afrika 70 fare - rhythmic, insistent grooves complaining about the corrupt Nigerian government. They are rhythms that get into your bloodstream.

Just listen to the shuffling bass, skanking hi-life guitar,  punchy brass breaks, Tony Allen's metronomic drums, the seductive female backing vocals and Fela's occasional semi-spoken pronouncements on the huge track that is Sorrow Tears and Blood. A better example of seventies Nigerian hi-life music you couldn't come up with. Oh and did I forget Kuti's blaring saxophone solo at nine minutes in.

Oh Lordy, just listen to that sumptuous and fluidly sensual bass line that introduces and drives on the reliably brassy groove of Colonial Mentality. Just put the track on and let it control you. There is something so beautifully essential and effortless about this music. we are treated to more asbsolutely top notch saxophone too.

Want to know where Talking Heads got some of their musical ideas from for 1980's Remain In Light? Get a load of this. In many ways, this is as important as roots reggae in the lists of late seventies "crossover" albums that were adopted by the punk-new wave cognoscenti.

It is one of the best two track albums you could hope to come across.

I'll include the lyrics to Sorrow Tears And Blood below, as somehow I feel they need reiterating:-

Some people lost some bread

All don cool down, brother

My people self dey fear too much

We fear for the thing we no see

We fear for the air around us

We fear to fight for freedom

We fear to fight for liberty

We fear to fight for justice

We fear to fight for happiness

We always get reason to fear

We no want die, we no want wound

We no want quench, we no want go

I get one child, mama dey for house

I don build house, I no want quench

I want enjoy, I no want go, ah

So policeman go slap your face

You no go talk

Rhodesia dey do them own

Our leaders dey yab for nothing

South Africa dey do them own

Ah, na so, time will dey go, time no wait for nobody