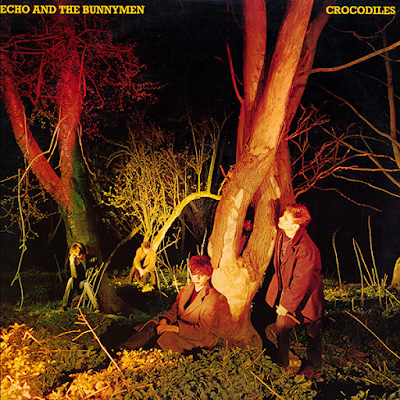 Another in the long list of classic "post punk" albums that started to appear the late seventies/early seventies. At the time, as a punk, still into The Clash, The Ramones, The Jam, Stiff Little Fingers and the like, plus roots reggae, I had little time for these dourly-dressed, floppy haired, earnest student types who populated bands like this. I found them terminally dull and not a little pretentious, with sombre rhythms, a distinct like of "up and at 'em" punk excitement and some navel-gazing lyrics. Time, however, has changed my opinion, to an extent, and I became able to appreciate atmospheric, evocative albums like this.

The songs
This, the band's debut album was full of solid, rumbling, deep bass, metronomic drums and some decidedly intricate guitar work - melodic and clever. The vocals were sonorously and typically post-punk, full of apparent portent. Stars Are Stars is a classic example of a track that fits this perfection perfectly as indeed does the Joy Division-esque Going Up.
Pride is all edgy guitars, beguiling lyrics, inventive little guitar bits and an insistent drum and bass rhythm that never lets up, pushing the track on, allowing the guitar and vocals to do their bit.
The initial U2 albums, Boy and October, were very influenced by this. In many ways, albums like this were very ground-breaking and listening to it now, it just sums up that dark, brooding late seventies/early eighties period, before "New Romanticism" had burst out in an explosion of dressing up, eyeliner and showing off. Echo & The Bunnymen had no desire to do any of that stuff (maybe a bit of eyeliner and black hair dye!). I admire them for that. They remained dour and serious. 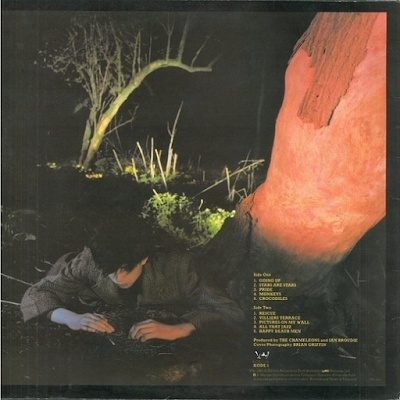 Monkeys has a pre-U2 guitar riff that surely influenced David "The Edge" Evans. Crocodiles is great -  by far the punkiest, liveliest track on the album, probably why it appeals to me.
Rescue is a bassy, inscrutable track, with more winning guitar and another strong vocal from Ian McCullough - "is this the blues I'm singing?..." he asks.  There's a great bass bit near the end, interjected by some more impressive guitar from Will Sergeant. Villiers Terrace is an atmospheric song about "people rolling round the carpet..mixing up the medicine..." after taking drugs in what was no doubt an interesting house to visit! You probably wouldn't get out for days.

Pictures On My Wall is the sort of miserable, morose-sounding song I despised at the time. Now I quite like it. It still reminds me of dark evenings in student accommodation in the autumn of 1980.
All That Jazz is more of the same, while Happy Death Men interesting experiments with some avant-garde jazzy piano and some synthesised brass bits. An inventive ending to an impressive debut album from a very influential band. 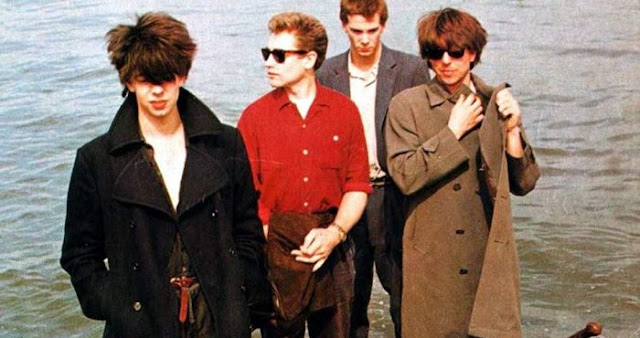 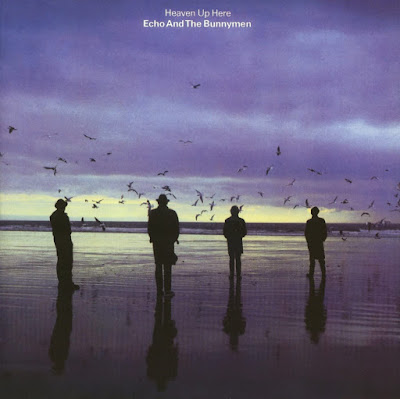 True Bunnymen aficionados (not me, I’m just an occasional dabbler) consider this to be the band’s best album, one that best exemplified what they were about. I know what they mean - the album is full of dark, post punk, studenty sounds and ambience. It is certainly not a listen for a sunny summer’s afternoon, best suiting a miserable, dark November evening. The album’s cover is perfectly suited to the music.

Show Of Strength has an atmospheric, brooding, sonorous guitar and bass intro, together with the dour vocal. All very post punk, and surely very influential on early U2. Despite all the vibrant, expressive new romantic foppery flouncing all around, in 1981 this, along with Siouxsie & The Banshees and Joy Division was just as much the sound of the time.

It Was A Pleasure ploughs the same drab, insistent furrow too. There is still something infectious about its mysterious sound, however. Check out that lovely rubbery bass line on the livelier (but still desperately gloomy) A Promise. Ideal music for non-dancing, darkly-dressed navel gazers and the total antithesis of the new romantic genre and all it stood for.

Heaven Up Here is one of the album’s more upbeat numbers, with a distinctive jangly guitar sound and a raw, punky edge to it. Remember, it was still 1981 and punk was still alive in the culture, very much, even if musically, things were moving on. I like this one a lot. Ian McCullough sounds like a post punky Jim Morrison in places.

The short The Disease is genuinely miserable and it leads into the solemn All My Colours. I understand why fans consider this their best album - they aren’t fans because they wanted to hear happy stuff, after all, were they? That wasn’t what attracted them to the band in the first place.

No Dark Things, with its frantically-strummed guitar and throbbing bass, is archetypal Bunnymen. Turquoise Days has a Banshees gloominess to it. If you are expecting the final track, All I Want, to change - it won’t. This is a bleak listen, but if that’s the mood you’re in, it will suit just fine. 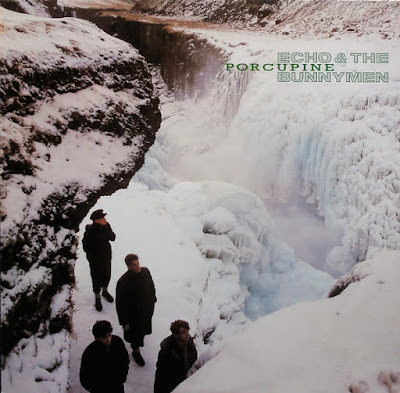 Many people found this, the group’s third album, more accessible than its dour predecessor. Personally, I prefer Heaven Up Here’s gloomy ambience. This one is more lively overall but suffers from a more muddy production, for me

The Cutter, with its distinctive, Eastern-sounding swirling instrumentation was a hit single, bringing the group to a lot more people’s attention. It exemplified the poppy side of post punk, if there was such a thing. It went alongside The Cure, early New Order and early Simple Minds at the time as the accessible antithesis to Duran Duran, Spandau Ballet and Culture Club.

The Back Of Love actually sounds a bit like a darker version of Duran Duran. Well, it does to me anyway. My White Devil is a lyrically-odd song that initially references John Webster’s Jacobean tragedy, along with its sister play, The Duchess Of Malfi, both of which I studied for “A” Level, as it happens. Maybe Ian McCulloch was attempting to show how erudite he was with this one.

Clay is just so very much the sound of vibrant post punk circa 1983 - more of those frantically-strummed guitars and pounding drums. Porcupine is a dour, funereal dirge with strong Doors influences. Its second half finds it waking up a bit and finding some oomph.

The chunky, upbeat Heads Will Roll has the band returning to that early U2 sound that populated much of the previous album. More of those Eastern influences can be found here too. Ripeness is a vibrant, melodic and, at times thumping U2-esque strummer.

Higher Hell has a deep bass line and a sombre ambience. Its sonorous vocals start to grate a bit by the end. Gods Will Be Gods is livelier and very Siouxsie-esque. Again, it finishes poorly, raucously. In Bluer Skies is an improvement, however, featuring a slight departure from the usual sound with its infectious percussive rhythm.

Personally, as a non proper Bunnyman, I find this album simply more of the same but not nearly as uniquely evocative as the previous outing. You can only be dour and miserable for so long. It all comes across as a bit formulaic. I can only really take one album at a time from Echo and my choice, if requested, would definitely be Heaven Up Here.

* The Talking Heads-ish bonus track, Fuel, is an intriguing one, and possibly should have made the album.

Incidentally, the shot below has them looking very U2-ish in their dark coats wandering around in Iceland's frozen landscape. 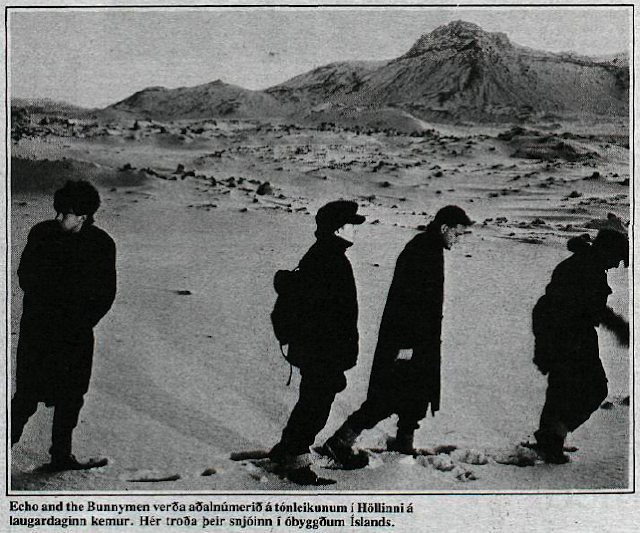 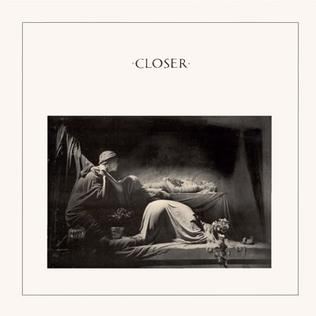