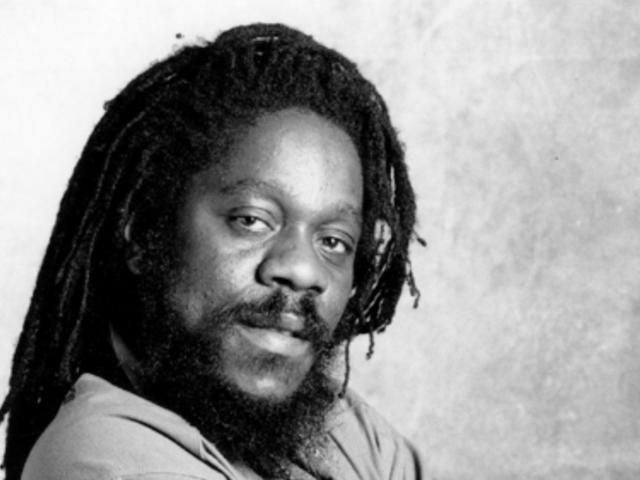 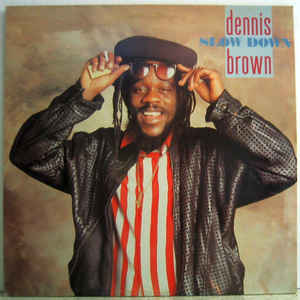 Dennis Brown had been around for quite a while by 1978. His one big hit, Money In My Pocket had been in 1978 and his more rootsy material dated from that time.
The songs
Here, he joins with Gregory Isaacs and Prince Jammy on production duties. You can tell, it has a real Isaacs sound about it, particularly on the seductive slow skank of Slow Down Woman. It is almost Lovers Rock in its ambience.
It's Magic is a lively, pop opener too. These two get the album off to a great start.

Yes, there are some eighties-style instrumentation in the slick, synthesised keyboards, but there are still some punchy horns and mid-tempo, skanking, rock-steady-ish rhythms all over the albums. Brown's output was still always going to have a certain amount of roots feel to it. The Bob Marley meets Jacob Miller thump of Joy In The Morning had that slow grind to it, although it is praise of his woman, as opposed to Jah.
Time for some Rasta consciousness, probably. This duly comes in the beautifully horn-driven, catchy They Fight I. Even the cultural, devotional rootsier tracks are given an Isaacs-esque infectious poppiness that is hard to resist. 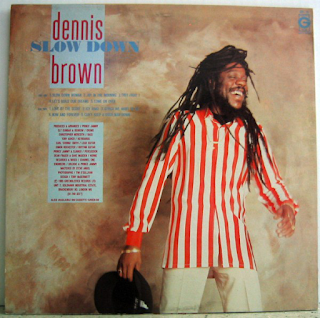 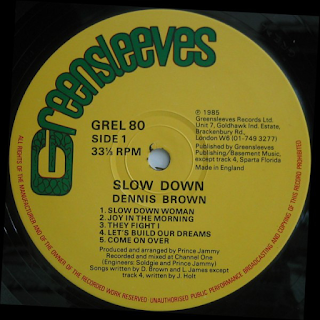 The cover of John Holt's Let's Build Our Dreams has more influence on it and it has the sort of brass-driven slow groove that UB40 used so much during the same period. In the same vein is Come On Over that sounds as if it has come straight off Isaacs' Night Nurse. These tracks are an appealing mix of rootsy depth yet rocksteady lightness, if that makes sense.
UB40 were so influenced by Love By The Score, surely. Ali Campbell sounds a lot like Dennis Brown at times.

Icy Road and Africa We Want To Go are both roots tracks. The former has a rumbling rhythm and some portentous lyrics. The Burning Spear-like latter is the album's most typical roots cut in both sound and lyrics. Even these serious tracks, though, have an upbeat, catchy appeal to them, however.
Now And Forever has a hint of Black Uhuru about it. Can't Keep A Good Man Down is almost funky in its addictive backbeat. Live And Love has a few eighties synth drum fills but it is still a kicking track.

The sound on the whole album is truly sumptuous too, making it a joy from beginning to end. 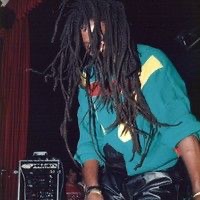 The Best Of Dennis Brown (Trojan) 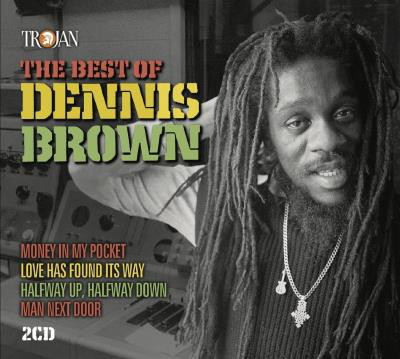 Dennis Brown was an often under-mentioned and under-appreciated name in the late seventies reggae crossover boom - not quite commercial or charismatic enough to match the popularity of Bob Marley, not rootsy enough for the punky reggae party alternative crowd or slick enough for the Gregory Isaacs lovers rock fans. That said, he has characteristics from all those sub-genres - he had an ear for interpreting a song melodiously, he could do roots and consciousness if he wanted to and he also had a romantic smoothness, albeit with a deeper voice than Gregory Isaacs. To be fair, he did have considerable success with lovers rock-style material and also Bob Marley once declared that Brown was his favourite reggae singer, calling him "The Crown Prince Of Reggae", perhaps apocryphally.  He was influenced by some of the singers from the generation before him - Delroy Wilson, Ken Boothe and John Holt. So, on this compilation you will find Brown singing in several styles - roots, lovers, pop, rasta - making him one of reggae's most versatile artists. 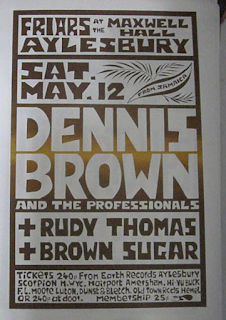 The songs
His big hit was, of course, the actually very catchy and commercial Money In My Pocket, which was a hit at the height of the punk crossover. I remember seeing him live at Friars, Aylesbury in 1979 (note the ticket price on the poster of £2.40) and he was excellent. Other highlights are the rootsy Wolf & Leopards, the Max Romeo/Jacob Miller-esque Revolution, Westbound Train and the deep, dubby Tenement Yard. Who says Dennis can't do roots? This is typical late seventies roots fare, more than suitable enough for Notting Hill Carnival. Listen to that big, rumbling bass and echoey vocal.
He can do romance too, though, and Love Has Found Its Way is a classic piece of melodic lovers rock. The same applies to the lovely I'm Coming Tonight or Oh Girl (You Are My Inspiration). The sumptuous Your Man is very Gregory Isaacs-ish too.

Equal Rights is not Peter Tosh's song, but a lively, brassy and poppy Leroy Sibbles song expressing the same sentiments. Brown had an ability to adapt to what ever the vocals demands of a song were - tuneful, passionate, committed, mournful or yearning.
Here I Come Again has him in a completely different mode to the previous song as he takes up the Rasta mantle, providing some soulful and pious vocals.
Ain't That Loving You has his voice soaring once more, Jacob Miller-style, on a gentle, sensual skank. Cassandra sounds very like Al Green/UB40's Here I Am (Come And Take Me) in places.

Dennis showed a Rastafarian belief and consciousness on tracks like the bassy Children Of Israel, the infectious No More Will I Roam, Tribulation and Whip Them Jah Jah and also a strong sense of black heritage on Africa (We Want To Go).
Halfway Up, Halfway Down features some very Steely Dan-style guitar on a mid-pace rock-ish groove. Lost Without You has an extended dub groove on its second half which showed a willingness to embrace dub rhythms, Love's Got A Hold On Me also has a shuffling, dubby backing.

Basically, you can pick any of the generous forty tracks on this compilation, they are all good, to be honest. Playing the album on "shuffle" is a good thing too. The sound quality, as on all these superb Trojan releases, is outstanding. The bass is deep and warm, as it should be, of course, but it is not reverberatingly deep. Check out the beautiful bass sound on Revolution as an example or the warm skank of Here I Come Again.