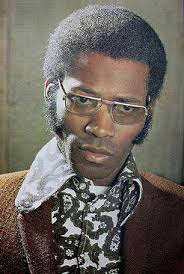 The Best Of Dandy Livingstone (Trojan) 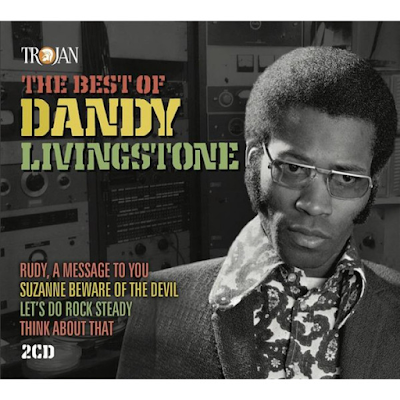 Dandy Livingstone made his name as a ska and rock steady reggae singer in the mid-late sixties, when most of his recordings were credited to "Dandy" only. Some were credited to "Boy Friday" as well. Other tracks on this compilation are Livingstone productions, for artists such as Jackie Robinson, Tito Simon, Audrey Hall, The Superboys, The Israelites, Bobby Thompson and The Brother Dan All-Stars. In the early seventies he had some chart success with an easy-skanking, poppy reggae style. His voice was always soft and sweetly melodic.

I always had memories of pictures of Livingstone from the time, in his studious-looking glasses and flower-power round collared shirt not seeming anything much like a pop star.

Livingstone's biggest hit was the irresistibly catchy Suzanne Beware Of The Devil which did really well in the UK in 1972. He also recorded the original of A Message To You Rudy, memorably covered by The Specials. Rico Rodriguez, who played on The Specials' version, also contributes a wonderful trombone backing on this original version. Reggae In Your Jeggae was a forerunner of the mid/late seventies' DJ toasting, with meaningless lyrics over a rootsy rhythm. It was one of the earliest examples of a reggae song that concentrated more on its rhythm as opposed to its lyrical content as a song.
Can't Get Used To Losing You, the cover of the Andy Williams easy-listening classic, was better-known in a reggae format by its cover by The Beat in 1980, but this was the original reggae makeover for the song.

Big City, with its distinctive synthesiser riffs, was another excellent Livingstone song too, which features his smooth voice at its best. The typical slice of Jimmy Cliff-esque early seventies reggae that was Think About That was another minor hit for Livingstone. Same Old Fashioned Way is also a very poppy number that summed up its era.

A lot of the material on this forty track compilation are cover versions - Motown in the case of Jimmy Ruffin's Take A Letter, Maria, soul in Aretha Franklin's People Get Ready and James & Bobby Purify's I'm Your Puppet and even The Rolling Stones' Salt Of The Earth.
The Israelites give us a dubby, spacey, almost psychedelic cover of The Beatles' Come Together. This is one of the album's hidden little gems. It is titled here as Let's Come Together.

There is also some excellent ska present in Tito Simon's What A Life. Prototype toasting appears again the DJ-style talkover vocal and bassy skank of Boy Friday's Version Girl (famously covered by UB40 on 1983's Labour Of Love album). This is where they got it from. The track is a sort of early dancehall groove.
(People Get Ready) Let's Do Rock Steady is a ska groove that was energetically covered in the late seventies by two-tone band The Bodysnatchers.

Jackie Robinson's Could It Be True (You're Jivin' Me) is a lively, archetypal rock steady skinhead-syle skank. Move Your Mule is a delightful piece of saxophone-backed skanking ska fun.
Dr. Sure Shot is one of those slightly saucy reggae tunes that abounded in the late sixties/early seventies. I'm sure you can imagine what it is hinting at.
The Superboys' East Of Suez is an atmospheric instrumental and is the sort of thing Madness did a lot of ten years later. The same group's Propagandist is an easy example of roots reggae.

Another minor hit, Build Your Love On A Solid Foundation was surely more than just the inspiration for Bob Marley & The Wailers' One Foundation, it sounds very similar.

There is probably not enough quality to fully justify a forty track collection, and there is definitely a bit of filler in reggae-fied versions of What Do You Want To Make Those Eyes At Me For and Oh Dear What Can The Matter Be. Surprisingly, though, the latter has an authentic ska beat. It is a good album to put on random and dip into every now and again, however. Dandy Livingstone was definitely one of reggae's pioneers, helping to bring reggae into our lives in the early seventies, and for that alone he deserves a bit of one's time.