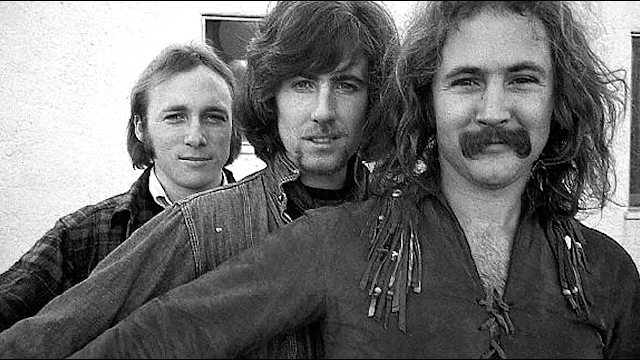 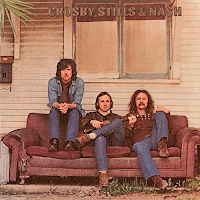 When I hear this, I always think what a contradiction it was that such beautiful laid-back music appeared at the height of the Vietnam War. This piece of work was a perfect antidote to the horrors of war. Just hole up in the backwoods somewhere and listen to Crosby, Stills and Nash or get on your big two wheeler and ride off to join a hippy commune. The vocal harmonies on here, married to the subtle, melodic bass, razor sharp acoustic guitar, backed by a gentle drum sound is a simple joy from beginning to end.
Put on the opening tour de force, the ever-changing Suite: Judy Blue Eyes, open the windows and summer’s here again - then let it flow into Marrakesh Express and you are in laid-back hippy heaven, man. Not only is the material extremely well played but the sound quality is top notch. Listen to the bass on Guinevere, then the beautiful harmonies on You Don’t Have To Cry, which are sublime. Follow that with the guitar and drums on Pre-Road Downs and then the entrancing lead guitar and bass intro to Wooden Ships, finally the pleasingly solid blues rock and protest motivations of Long Time Gone. It is all a pure delight. The latter is possibly the best track on the album. Incidentally, Wooden Ships was covered by Jefferson Airplane, before this album came out.
Lady Of The Island is a gentle acoustic number, with hints of Paul McCartney's similar material for The Beatles to it. It is all very chilled-out, relaxing stuff. Helplessly Hoping is very typical of CSN and their genre from this era - all immaculate male vocal, airy harmonies over a gently strummed acoustic guitar. 49 Bye Byes is a melodious piece of subtly bassy folk rock, underpinned by some nice organ. My favourites on the album are, though, the ones where they rock out a bit - Long Time Gone in particular, Pre-Road Downs and Wooden Ships. I have to say, however, that just sometimes when either Nash or Stills go high-voiced it can grate a bit, such as on the "catch a sparrow" bit on Judy Blue Eyes, sung, I think, by Nash.

Country Rock”, call it what you will, along with The Byrds from the same era, it began here. So many future artists were influenced by this - Fairport Convention, Matthews Southern Comfort, Rumours-era Fleetwood Mac, Joni Mitchell, America, The Eagles and Neil Young, of course, to name a few. This lovely album just washes over you and instantly puts you in a relaxed frame of mind. Try getting angry while this is on. This apparently does not apply to the group's members, though. In 2020 neither Nash, Stills (nor Neil Young) were speaking to Crosby.

** The non-album tracks include the gentle balladry of Do For The Others and Song With No Words, neither of which would have changed the ambience of the album. The same applies to the relaxing cover of Everybody's Talkin'.
CSNY - Déjà Vu(1970) 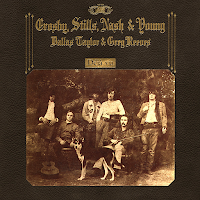 Building on the success of their debut, C, S and N added Y and the help of two other musicians, Taylor and Reeves, and produced this seminal, influential laid back piece of folky, hippy rock.
Its influences on many others is clear - it is well documented that the first part of Carry On sounds just like the riff on Led Zeppelin’s Friends. Paul McCartney’s 1972 track Wild Life has, for me, more than a hint of the hippy quandary anthem Almost Cut My Hair. Either way, it is a great grinding rock track, as hard as CSNY rocked. Indeed, both those songs have excellent gritty rock bits in them, as does the closer, Everybody I Love You and parts of the Country Girl medley.
Most of the rest of the album is melodic, laid back folk, such as Teach Your Children, Neil Young’s plaintive but stunningly beautiful, North Ontario-inspired Helpless (which, for me again, has a feel of Van Morrison’s Rough God Goes Riding) and the lovely, evocative McCartney-ish Our House. The title track, Deja Vu, too, with its Marrakesh Express-style vocal parts is four minutes of early 70s folk rock perfection. It almost exemplifies the genre. Lovely bass part at the end as well. 4 + 20 is in the same, peaceful, folky vein.

Then there is their version of Joni Mitchell's iconic Woodstock, standing somewhat alone in its rock-ish lead guitar-driven tone that is not very much like to the well-known Matthews Southern Comfort version. I like it, but I have to admit to preferring the more radio-friendly latter. Great guitar bit in the middle though. C, S, N and Y always seemed to enjoy rocking out, despite the laid back feel of their material. Funny how, like The Band, CSNY felt the need to dress up like 1850s pioneers for the sepia cover. Although this cd does not appear to have been remastered at all, the sound is excellent and does not need tinkering with. Nice 70s stereo separation. Perfect. Incidentally, in 2021 a new remaster appeared which is excellent and also includes alternative versions of the album's tracks - and, as is often the way, they are great, particularly the ten-minute version of Almost Cut My Hair.
Related posts :-
Email ThisBlogThis!Share to TwitterShare to FacebookShare to Pinterest