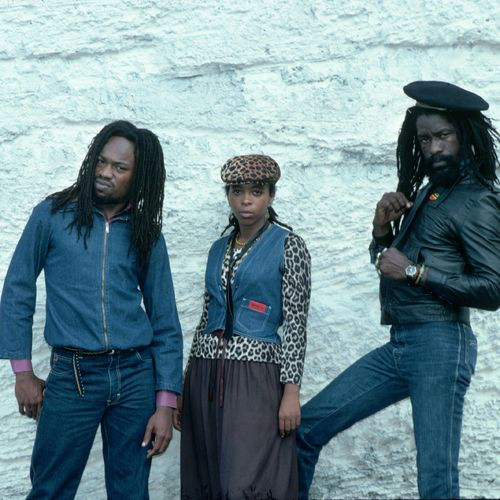 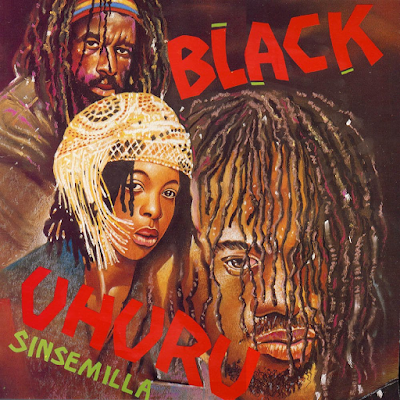 Happiness/World Is Africa/Push Push/There Is Fire/No Loafing (Sit And Wonder)/Sinsemilla/Endurance/Vampire
Black Uhuru released this album in 1980, and reggae was beginning to change direction slightly after the roots boom of 1975-1979. What would eventually morph into “ragga” rhythms was beginning to make itself known - a harder, less melodic, more stripped down and instrumentally basic sound. Thumping synth drums, synthesised percussion, rumbling reduced bass notes, keyboard loop samples and the occasional bit of guitar. Personally, I prefer the lighter, more inventive sounds of The Gladiators, Bunny Wailer, Aswad and Burning Spear. For me, the great years for reggae were from 1969 to 1979.

Black Uhuru had a great vocal sound though, and their vibrant, insistent rhythm is certainly intoxicating. Their lyrical preoccupations are mainly oppression, racial awareness and lots of references to the joys of marijuana, as opposed to religious devotion.

Happiness is a shuffling, staccato piece of heavy-ish roots with dance-ish style drums and a big, pounding bass. Black Uhuru are definitely more dance and rhythm-influenced than some of the lighter, more instantly accessible roots artists. 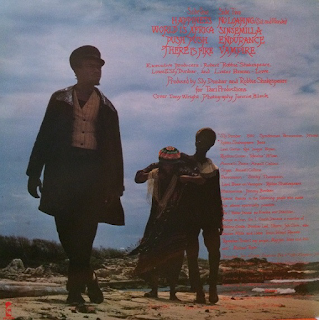 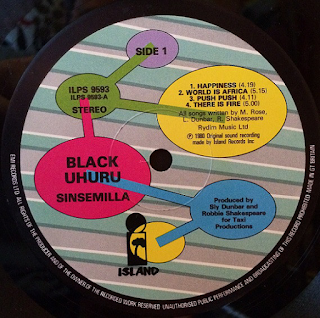 World Is Africa is upbeat and catchy and a great vocal and guitar parts behind the thumping drum beat. Push Push is a slow groove, with that electric sort of synth “boop” percussion sound. No Loafing and There Is Fire follow the same musical path, with the former condemning apartheid in its lyrics.
Sensimilla speaks for itself - a ganja song. It has a hypnotic, mesmerising groove, however, and it the best cut on the album.

Every Dreadlocks is a lively concession to Rasta concerns and has a great beat to it, up there with Sensimilla. It again features that funny percussion noise, but to great effect. It is probably the most naturally reggae song on the album.
Vampire isn’t bad either, rhythmic, with a nice drum sound on it, proper drums and a rousing vocal. This is very much an album of reggae as it was in 1980, facing considerable changes. 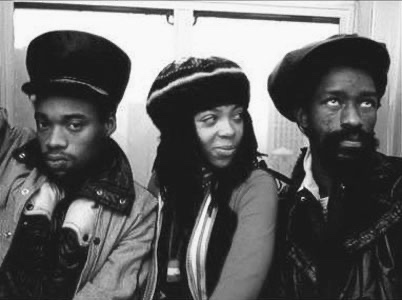 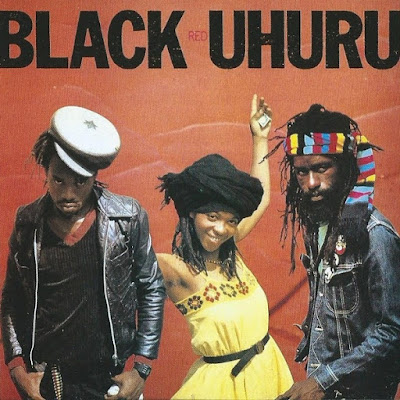 This album, from 1981, saw Black Uhuru successfully combine a roots instinct with a bit of an eighties. keyboard-driven pop feel on occasions, rendering it one of the period's most accessible reggae albums. Despite this, though, the group never lose their dub-roots emphasis. The message is always on point too and, in many ways, I find this album a far more rootsier one than its perhaps over-synthy predecessor, Sinsemilla. The tracks are mostly around the five minute mark and are full of a vibrant roots commitment. It is the beat, the bass and the committed vocals that dominate as opposed to the keyboards. This, for me, is a good thing.

Youth Of Eglington is a superb track - vital, catchy and carefree. Its message about disaffected youth tends to get lost under its infectious poppy beat. It is a perfect mix of reggae riddims and eighties keyboard-driven pop. Nice use of congas too plus a great bass line (check out the bit at the track's end). It is simply a great song all round.

Another impressive and irresistible number is Sponji Reggae, which skanks along in an appealing mid-pace way, featuring a gritty, rootsy vocal. It is another prefect merge of roots sensibilities and a lightly lighter poppy feel. The percussion at the back end of the track is superb.

Sistren is a solid rootsy, bassy number enhanced by a wonderfully rubber bass and some excellent dubby parts.

Journey begins with some powerful drums and the muscular beat continues throughout the slow, plaintive but powerful Marley-esque cut. It is a proper, hard-hitting roots number, as deep as the group had got thus far. The sound quality is superb on here too, I have to say.

Utterance has an attractive, once more Marley-influenced groove and it expresses lots of Rasta awareness - "What a joy to hear the utterance from a Rasta". It plays out like a sermon. Puff She Puff continues the Rasta consciousness on another relatively heavy, righteous groove.

Rockstone has a nice light guitar sound but the overall beat is still heavy-ish - listen to that big bass sound and the mid-song slightly dubby break. Carbine ends this impressive album with another Marley-style slow but insistent skank. The vocal is very influenced by Marley in its delivery and diction.

Overall, this was a fine album of its time. Good roots reggae. 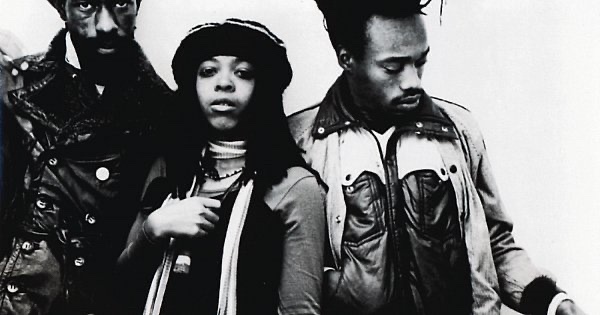 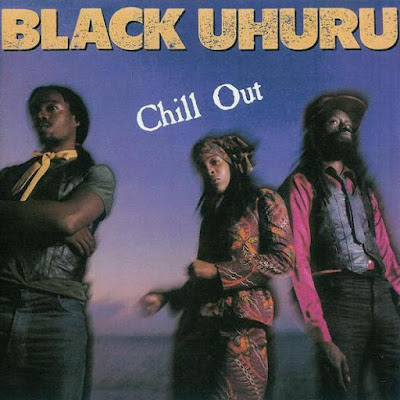 This was probably Black Uhuru's last album of real note and dates from 1982. It is a good one too, with a solid roots-dub vibe but also a melodic undercurrent in there too. There is a sort of seductive after dark urban feel to it and it is easily the match of either of its two predecessors.

Chill Out is a delicious dubby opener with the group sounding as 'crucial' as they had been to date. It talks of taking the Rasta message to New York. The track's backing sounds are excellent, featuring a mysterious guitar (or maybe keyboard) sound.

Darkness is an appealing, mid-pace groove that reminds me of some of the sounds that Talking Heads would use on the following year's Speaking In Tongues album - something about the guitar and keyboard breaks. I'm sure you will know what I mean when you hear it.

Eye Market has a great drum riddim, killer bass and a general groove that attracts from the first moment. There is a fine dubbiness driving the track along.

Right Stuff ups the pace slightly and has a vaguely dance-y vibe to it in its catchy backing. Again, you can hear something in this track's sound that would have influenced a fair few artists around this time.

Monday confronts the historical issue of slavery on a return to the insistent beat of most of the album. It has a great bassy beat driving it on beneath the vocal. A similarly throbbing, seductive bass backs the yearning Fleety Foot.

Wicked Act confronts African identity and wealth disparity within the world on yet another seductive, bassy slow skank. The vocal is plaintive and Marley-esque, not for the first time.

Moya (Queen Of I Jungle) is a pleasant, slightly more upbeat number with a built-in catchiness to it. I love some of the dubby but melodic instrumental breaks that underpin the track.

The album ends with the slightly more laid-back strains of Emotional Slaughter.

Make no mistake, despite its accessible sound

this was a very rootsy album, one of three strong albums in a row. 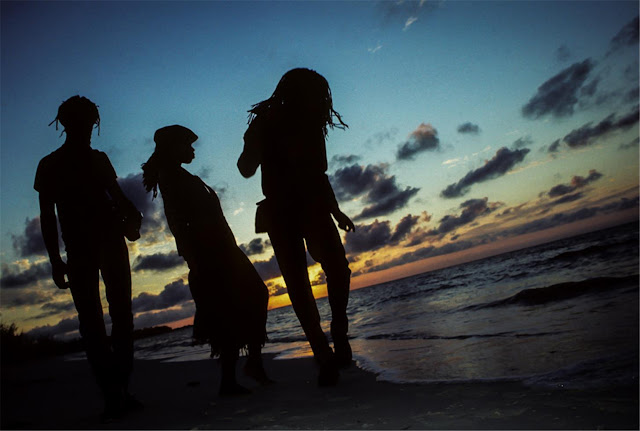 © Lynn Goldsmith
Email ThisBlogThis!Share to TwitterShare to FacebookShare to Pinterest