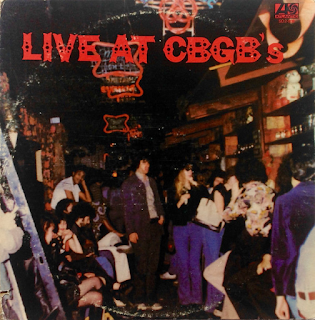 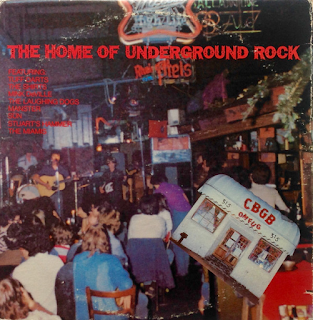 I used to own this album in the late seventies, around 1978. I bought it because it contained three songs by Mink De Ville on it. I love those tracks, but to be honest, I didn't give the rest of the material the fair chance it deserved. Nineteen year-olds' musical taste tend to be far more blinkered than they should be. That was a pity because this album is blooming great! There is some superb early "new wave" on here taken from sweaty, energetic nights at the cramped venue in New York's Lower East Side called CBGBs, from which launched the US punk scene. The music is far more rocking and far less nihilistic than you may imagine. Yes, it is vibrant, vigorous and played with that trademark punk energy, but a lot of it owes a lot to The Velvet Underground and The New York Dolls. The US punk scene always had the legacy it owed to earlier genres, whereas the UK equivalent saw punk as starting from a year zero point.

By the way, look at the band playing on the rear cover. It's Talking Heads.

As I said, this is principally all about the three Mink De Ville tracks for me, as a huge fan. They are not available anywhere else, not on any De Ville album, which is a shame, because they are great. Still, I eventually managed to track them down to download, long after my vinyl copy had been sold some time back in the eighties. Cadillac Moon is just truly wonderful - a bluesy, lengthy street romance of a song with Willy De Ville doing his best West Side Story latin lover thing.

Let Me Dream If I Want To is a catchy rock number, with real Velvet Underground shades, while Change It Comes is a convincing piece of white reggae a few years before The Police and even The Clash. It has a bit of a Rolling Stones Black And Blue feel to it, one feels Keith Richards would have loved it. Talking of The Stones, Tuff Darts' All For The Love Of Rock 'n' Roll is a superb rocker, sort of Stones meets new wave before there even was a "new wave". The Shirts' Operetico again has some reggae hints in it, but the over-riding feel is one of early Blondie. "We're The Shoits..." is how they introduce themselves in true New York style. Singer Annie Golden is pictured below. 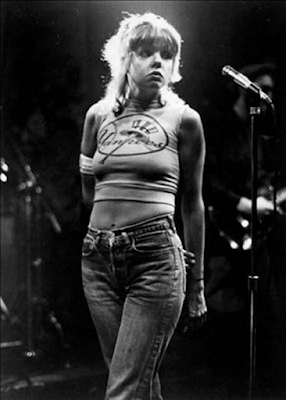 The Laughing Dogs' I Need A Million is a punky, upbeat number in a sort of New York Dolls meets Richard Hell style with more of those Velvet Underground undertones. Frantic drums and ebullient bass lines abound. Talking of bass lines, check out The Shirts' Poe, where Blondie and T. Rex merge with a punk vigour. Tuff Darts are back now with a Stones/glam rock number in Head Over Heels full of guitar-driven chutzpah. I wonder why they never made it? I don't know why I didn't properly go for this back in 1978, because its great. I stuck with Blondie and The Ramones. Talking of which, Manster's cover of The Yardbirds' Over, Under, Sideways, Down is delivered with a breakneck intensity worthy of the frantic foursome. The same group's I'm Not Really This Way is so Doors-esque as to be not funny. It has a suitably decadent feel to it, with a killer guitar solo too.

Romance by Sun is one of the album's more frenetic punkers. It was this sort of thing that inspired many a punk group on both sides of the Atlantic. Penetration sounded a lot like this. It has a very Led Zeppelin-inspired vocal, though. Everybody's Depraved by Stuart's Hammer has shades of early Joe Jackson in its rhythm.

Pictured below are Tuff Darts. 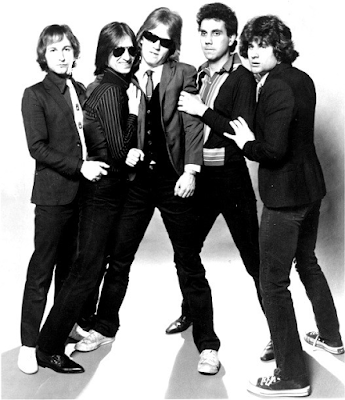 We Deliver by The Miamis is another New York Dolls-style raucous rocker. The Shirts' A.V.M. is a a sort of dense, lengthy post-punk number long before punk had even properly begun. Siouxsie Sioux must have listened to this.

The Laughing Dogs' It Feels Alright Tonight is a melodic, almost radio-friendly number with a Flamin' Groovies sound to it. No fist pumping punk here. Tuff Darts' Slash is a quirky, lively number with a sort of early seventies Bowie influence vaguely detectable in there somewhere, and of course those omnipresent New York Dolls.

This album is well worth checking out, it is so evocative and nostalgic for a time when things really did change in music, and this is where it all began for the US punk scene. The strange thing is, though, how much this music owed to that which had gone before. I was pleasantly surprised by how much I enjoyed listening to this again.