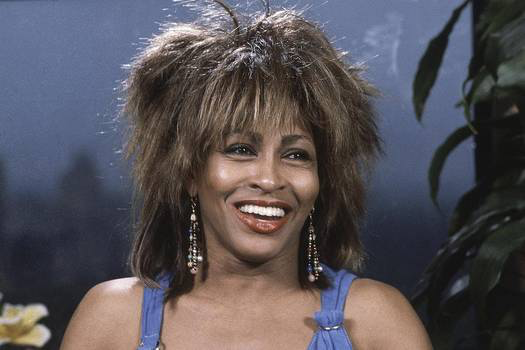 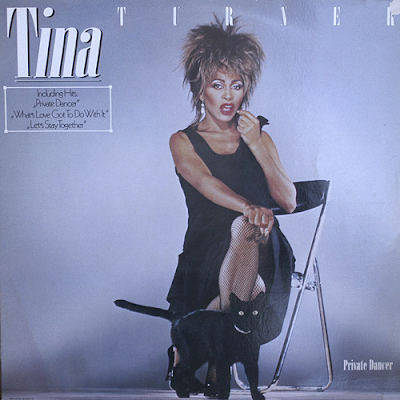 I Might Have Been Queen/What's Love Got To Do With It/Show Some Respect/I Can't Stand The Rain/Private Dancer/Let's Stay Together/Better Be Good To Me/Steel Claw/Help!/1984
This was a most unexpected "comeback" album, from then forty-five year-old Tina Turner, who had been off the scene for many years, despite always retaining a credible reputation. Members of the funk/pop group Heaven 17 were among several producers who helped create what was a contemporary sound for Turner, as opposed to the bluesy r'n'b she made her name with. The sound on here was a slick, polished very eighties sound, mixing current keyboard sounds with a rock sound but also a sort of clubby vibe that made it popular across the board. It was rock, it was pop, it was soul, it was dance. Many of the album's tracks were hits and all of a sudden, Tina Turner became a household name. This was one of the year's biggest-selling albums.

The biggest hits from the album were the slightly reggae-influenced, rhythmic but powerful and undoubtedly very catchy What's Love Got To Do With It; a suitably soulful cover of Ann Peebles' I Can't Stand The Rain (despite the superfluous synth interjections); a cover of Al Green's Let's Stay Together which took the seventies Memphis soul classic and turned it into an eighties club anthem. I was still young enough to go to nightclubs back then (as they were then called), and this was played all the time; The Beatles' Help!, which was slowed down and given a wonderfully dramatic gospelly soul makeover and an atmospheric rendition of David Bowie's 1984. The latter was possibly an unusual choice but it surprisingly works. To be honest, I prefer the originals of I Can't Stand The Rain and Let's Stay Together, but feel that both 1984 and Help! both offer something markedly different from their originals. 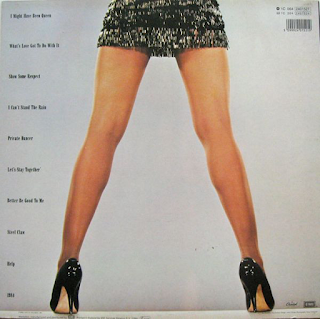 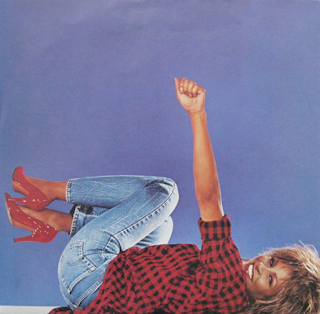 Dire Straits' Mark Knopfler wrote Private Dancer for his own group, but then felt that it would suit a female vocal better, so gave it to Turner. It is a marvellously evocative, atmospheric song, telling of the soulless existence of a private stripper and the faceless men she performs for. A sultry late-night saxophone and gently melodic bass line underpin an impressive vocal.

I Might Have Been Queen is the opener, but a strangely overlooked number, which is a shame as it is a pounding, rocking number. It is full of good backing guitar, a solid beat and with a strong vocal. While it displays some unfortunate mid-eighties flaws such as the synthesiser riffs, it is pretty good for an eighties track.
Show Some Respect slightly re-works the old Nutbush City Limits intro before the synthesisers kick in. It is pretty standard eighties rock, pleasant enough, but nothing outstanding.
Better Be Good To Me is more impressive, a soulful, mid-pace rocker and is followed by the frantic rock of Steel Claw. Tina's vocal handles this powerful number superbly and the track is a little gem, to be honest.

So there you have it, Tina Turner was back and would put out two more respectable albums before the quality would drop just a bit. During the mid-eighties, she became a huge artist, bigger than she had ever been. It came as a surprise to everyone, including her, I should imagine. 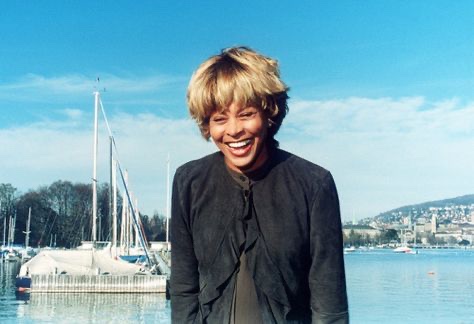 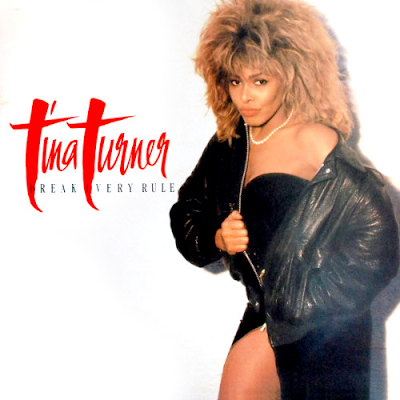 After the phenomenal comeback success of Private Dancer, this follow-up album always tends to get somewhat overlooked, which is a bit of a shame as it is not a bad one. It is a little bit "of its time", with hints of eighties synth-pop but there is certainly some lively and also interesting material on there too.

The first two tracks are corkers, both of which were big hits - the sexy and powerful Typical Male and the incredibly catchy, singalong What You Get Is What You See with its killer riff. I have always loved this one.
Two People is a slow burning, sensual ballad. Till The Right Man Comes Along is similar, but more upbeat. Very typical eighties pop/rock.
Afterglow is an atmospheric mid-paced, slightly bluesy number with a good vocal and some excellent guitar backing and solo near the end. 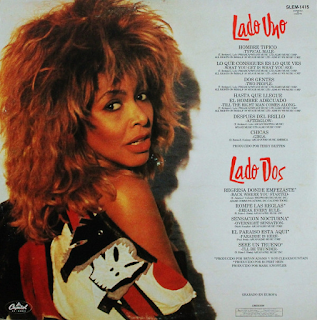 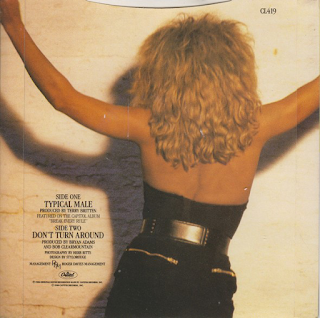 Tina's cover of David Bowie's beguiling Girls is convincing, doing the song justice. It is full of feeling and a mysterious ambience is all over it.
Back Where You Started is a Bryan Adams song and has a huge rock riff and a powerful drum attack. It is the heaviest rock song on the album. Tina copes with it, of course.
Break Every Rule is a catchy, appealing rock/pop number. Mark Knopfler's Overnight Sensation is a bluesy, Southern states-style rocker with, unsurprisingly, some great guitar from the man himself.

Paradise Is Here is a saxophone-driven emotive rock ballad and the powerful, grandiose I'll Be Thunder finishes things off. This is a very eighties album, you have to say, but not without its strong, solid appeal. Tina's voice is superb throughout, as is the backing. 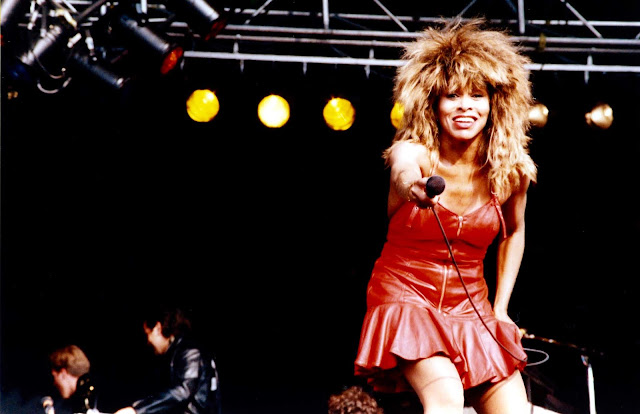 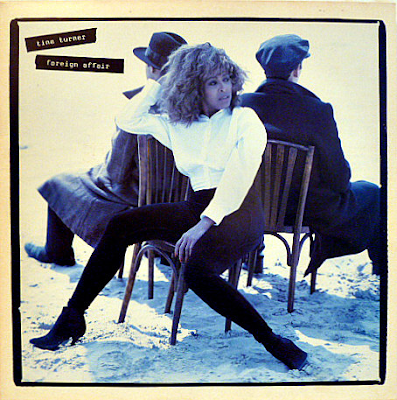 Steamy Windows/The Best/You Know Who (Is Doing You Know What)/Undercover Agent For The Blues/Look Me In The Heart/Be Tender With Me Baby/You Can't Stop Me Loving You/Ask Me How I Feel/Falling Like Rain/I Don't Wanna Lose You/Not Enough Romance/Foreign Affair
After two successful albums in Private Dancer and Break Every Rule, Tina Turner continued her remarkable renaissance with this rocky and bluesy album, that, although containing some hit singles, also had some credible, down 'n' dirty rock. It is actually quite a mature, sexy, adult rock album, albeit with a few eighties traits such as synthesiser riffs every now and then amidst that polished late eighties sound.

Steamy Windows is a swampy, bluesy rocker written by legendary Southern States bluesman Tony Joe White. The backing is punchy and intoxicating and Tina's vocal matches it perfectly.
The Best was a huge hit, and is known to all, (particularly The Office's David Brent). Yes it is cheesy and clichéd, but it is also built around a classic rock chorus, I can't help but like it. Killer saxophone solo in it too. You Know Who (Is Doing You Know What) is a funky slice of late eighties disco rock. 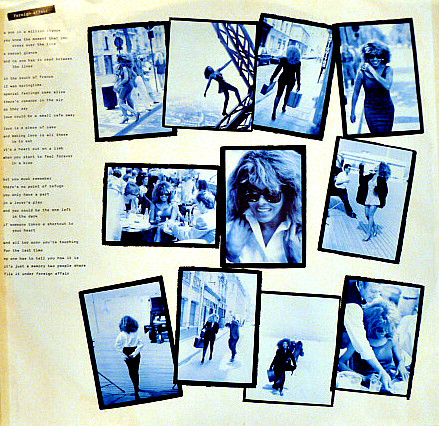 Undercover Agent For The Blues sees Tina return to her r'n'b/blues roots in convincing, seductive fashion. Look Me In The Heart is very eighties in places, but it is also extremely soulful. It was a perfect single, although not actually a huge hit.
Be Tender With Me Baby is a massive soul/rock ballad with some chunky power chords introducing it, an anthemic chorus and a superb, soaring vocal from Tina. Glorious guitar soloing sets it alight even more. You Can't Stop Me Loving You is a rhythmic, chugging rocker featuring more superb guitar.

Ask Me How I Feel keeps the big, stadium-rock sound going with another rousing corker of a track. Falling Like Rain is a sensual groove with another hook of a chorus.
I Don't Wanna Lose You was the album's other big hit and it is a polished piece of smooth laid-back disco soul. The quality continues with yet another addictive chorus on Not Enough Romance.
Foreign Affair is very atmospheric and sort of Dire Straits-ish in its guitar sound. Overall, this is an album absolutely chock-full of excellent tracks. Highly recommended. 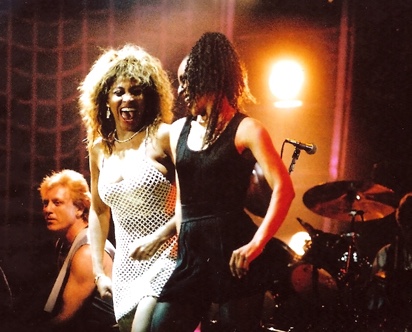 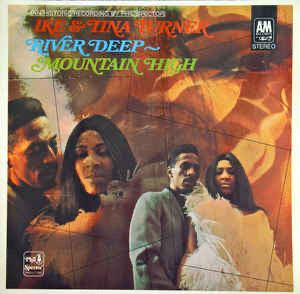