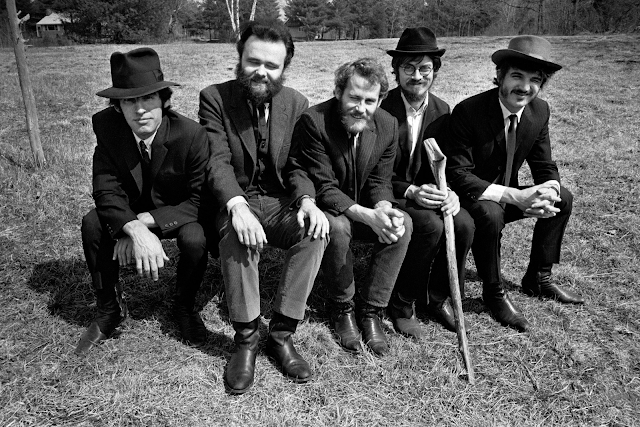 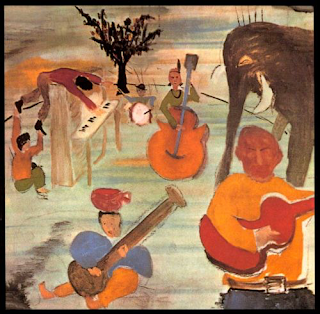 Bob Dylan's backing band finally turned into their own entity for this, their debut album. They hadn't quite gone full-on with the nineteenth-century sharecropper look for this album, but they are getting there, certainly lyrically.

As would characterise their subsequent work, all five members - Rick Danko, Garth Hudson, Robbie Robertson, Levon Helm and Richard Manuel interacted superbly, both musically and vocally, giving the album a sort of "almost live" feel, as if it were an ad hoc jam in some ways. Lyrically, it wasn't quite as nineteenth century as the next album would be, there were still some hippy-era remnants of airy, trippy lyrics, such as on In A Station - about climbing mountains and eating wild fruit. There are still moments of lyrics concentrating on rural life and family values, however, which would provide a pointer to the future. 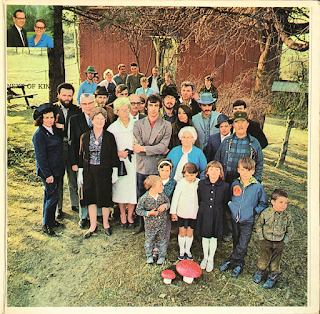 Tears Of Rage, co-written with Dylan, is a rousing opener, with a bluesy sound and some great guitar, while To Kingdom Come had an impressive drum rhythm and another blues-influenced rock sound. In A Station begins with a sort of medieval keyboard sound, and there are definite psychedelic hints in the bass sound. The album still very much reflects the turmoil of the late sixties far more than the next album, The Band did, which was far more nostalgic for life a hundred years earlier and dipped into "Americana" a lot more. Caledonia Mission has echoes of Dylan's "wild mercury sound" from Blonde On Blonde in its cymbal sound. As with all The Band's early work, Elton John's seventies material was so influenced by it, both musically and lyrically.

Then there is The Weight, still the group's most famous song. This is where the imagery of the old rural mid-West and the Americana thing really kicks in. It is a great country-ish piece of rock blues. What was it about? Who were the characters? Fanny, Anna Lee, Crazy Chester and so on. Who knows, it was all highly evocative, though. We Can Talk begins with some churchy organ and continues into an upbeat rock number that surely was the inspiration for many similar seventies rock numbers. It reminds me of so many things, yet I can't put my finger on what they are - Free? Early Rod Stewart? The Faces? Elton John? Maybe all of them.

Long Black Veil is a slow paced, mournful, country blues with some similar vocal harmonies to The Weight. Chest Fever begins with some madcap Deep Purple-esque psychedelic organ before it launches into a slow burning, bassy, rhythmic, pumping blues rocker. It is one of their most "1968" songs on the album. The organ sound is most foreboding, like something out of a Vincent Price horror movie. Lonesome Suzie is a plaintive, sensitive organ-driven ballad and then we get a couple of well-known Dylan compositions - This Wheel's On Fire and I Shall Be Released. The former is a guitar-led atmospheric number that charted for Julie Driscoll and The Brian Auger Trinity who turned it into something far ore psychedelic than its is here. The latter is a wonderful, hooky lament from an unfairly jailed prisoner. It has been covered by many artists subsequently. My favourite, is by The Tom Robinson Band in 1978. It also has a keyboard sound reminiscent of Them's cover of Dylan's It's All Over Now Baby Blue.

Yazoo Street Scandal is a rocking, rhythmic, organ riffy number to close the set. It is the most rocky track on the album. For some reason, in the verses, I get hints of U2's Bullet The Blue Sky in there somewhere. The influences of The Band on many other groups are manifold. The their next album, this was an influential, ground-breaking piece of work. 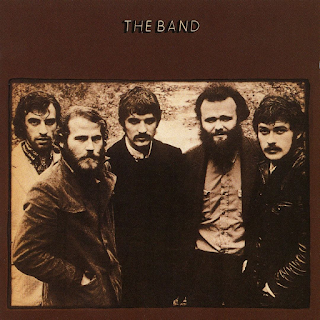 For some reason, Bob Dylan’s mid-sixties backing band, after triumphally backing him notably on  Blonde On Blonde decided to cast themselves in the late sixties as poor nineteenth century farmers, complete with sepia photographs and big beards (on two of them). The music often had lyrics about life in that period, and often the US Civil War, such as the evocative tale narrated by the character of Virgil Cane in The Night They Drove Old Dixie Down (although I have always preferred Joan Baez’s version). The songs are delivered sensitively, observationally and with a little humour at times. They talk of the US Civil War, of getting through the winter snow, of tending crops, of life in Tennesse and so on. They were quite unique at the time. This physical and lyrical imagery is far more prominent here than on the previous years's far more psychedelic (in places) debut album, Music From Big Pink.


The music is full, with a big drum and bass sound, Robbie Robertson’s guitar and Garth Hudson’s swirling, instantly recognisable organ sound dominating things. There is a bluesy feel to a lot of it, such as the shuffling Up On Cripple Creek and the upbeat, rollicking Rag Mama Rag. Bernie Taupin must have been so influenced by this album, lyrically, in its “Americana” aspects, and certainly Elton John uses a lot the musical style and vocal delivery in so much of the early seventies material. Tumbleweed Connection has a real feel of this album to it, both lyrically and musically. Across The Great Divide was a lively, rocking number too, while they showed they could do plaintive ballads too on Whispering Pines and When You Awake. 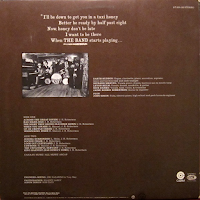 The Band were quite notable in that vocals were taken, in different places, by Richard Manuel, Levon Helm and Rick Danko and all five members made significant contributions to the sound. Their sound was, at the time, a very distinctive one, followed, of course,  by Elton John, Leon Russell and many others. Bruce Hornsby & The Range in the later years too.

Jemima Surrender has that archetypal Band sound. Yes, it is rock, but it has that bluesy and country edge to it too that made it stand out. Then there are the lyrics, certainly up there with some of of Dylan’s material from the same period. Indeed, many would argue that this is a superior album to Nashville Skyline by far. Rockin' Chair is a melodic number evoking life in “old Virginny” from the nineteenth century. There was a total incongruity to these songs after the height of sixties psychedelia, man, but the “country rock” thing was taking over, so it fitted in fine, in other ways.

Look Out Cleveland has a powerful drum, guitar and organ rocking interplay. Jawbone has some excellent piano,  but is slightly disjointed at times in its changes of pace. Unfaithful Servant is a slow, mournful bluesy number, with some great instrumental parts, about hard times back in the old days, while King Harvest closes the album with an organ-driven rocker about a union worker. Lyrics abound about “a dry summer” and “please let those crops grow”. There is a soulful feel to this one, almost funky in parts.

This was a ground-breaking, highly-influential album. The remastered sound quality is excellent too. Interestingly, the alternative versions of several of the tracks are deeper and bassier and, for me, preferable to the ones on the original album. 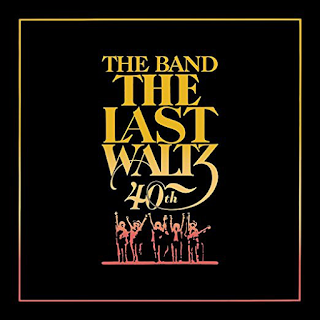 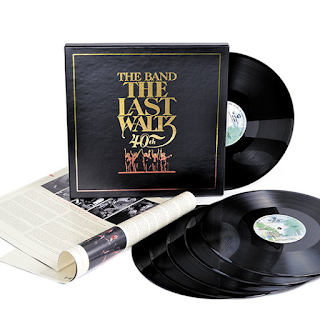 This was The Band’s farewell concert, from 1976, from Winterland, San Francisco. It included several guest performers, these are all shown on the track listing of the original concert shown here.
It is a wonderful show from beginning to end, with top quality sound and stunning performances from The Band and their guests. It is seventies, full-powered Americana rock music of the highest order.

You get most of The Band’s famous songs - The Weight, Up On Cripple Creek, Rag Mama Rag, Stage Fright and The Night They Drove Old Dixie Down - all played with a verve and vitality that takes your breath away. A great, lesser-known song is the saxophone-enhanced It Makes No Difference. 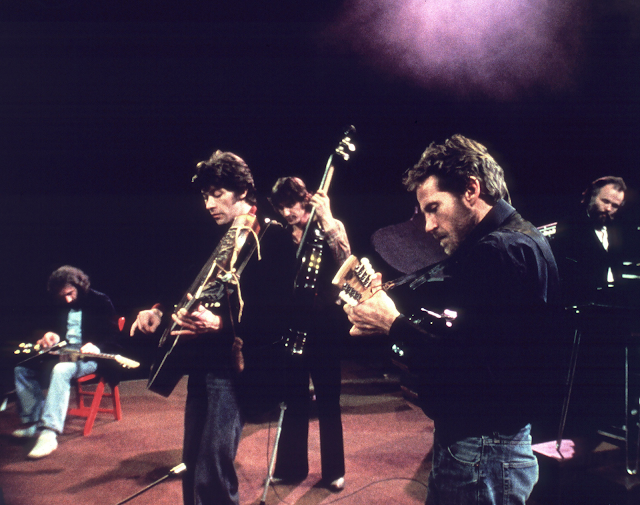 Muddy Waters sings some top notch blues - the romp that is Caldonia and the iconic Mannish Boy. Paul Butterfield gives us more blues on the punchy Mystery Train and Eric Clapton rocks on Further On Up The Road. Van Morrison has a great shot at stealing the show with Caravan while the concluding performances with Bob Dylan are as good as you would expect them to be. It is good to hear Hazel get a rare airing . It was good to hear the group’s original employer, Ronnie Hawkins, joining them for the rocking Who Do You Love. Then there is Neil Young, with his atmospheric, plaintive CSNY song, Helpless. The quality goes on and on. Joni Mitchell is quirkily appealing, bringing a different kind of atmosphere with her laid-back sound and witty, observational lyrics.

A slightly odd appearance was made by Neil Diamond, who sung Dry Your Eyes, which was co-written with The Band’s Robbie Robertson. He performs it well, nailing it, but, as an artist, his presence seemed a bit incongruous with the others there. It certainly was thought as such at the time. Diamond was seen as "uncool". I don’t mind, though, as I like him anyway. He deserves more respect than he ever gets/got. That is exactly what Robertson gave him.

He said, in retrospect, of the inclusion of Diamond at his request -

"The Tin Pan Alley songwriters in New York crafted brilliant songs for people to record, but they weren't performers," Robertson said in the The Last Waltz liner notes. "Neil Diamond bridged that world. When I worked with him on his record, people said, 'Is this a put-on?' No, it wasn't. This guy is really good at what he does and comes from this tradition of songwriting. He wanted to be one of those people - Jerry Leiber and Mike Stoller, Carole King, Gerry Goffin. I thought what he does is as good as anybody who played The Last Waltz."

Back to the overall album. You can pretty much say that every song is excellent. There really isn’t anything sub-standard on here. Check out something like Ophelia, for example - the organ, drums, guitar, horns, everything in perfect sync. Or try the riffy, brassy rock of The W.S. Walcott Medicine Show. They were a truly excellent group and, although the cognoscenti have always adored them, widespread acclaim has often eluded them. For a few years in the seventies, they were one of the best bands around.