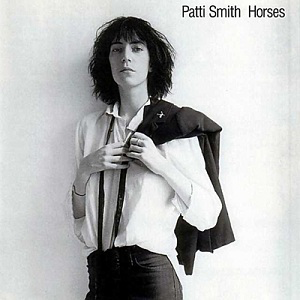 My goodness this album had balls. It was something really quite unique in 1975. Female artists didn't do this sort of thing. Yes, Janis Joplin had sung the blues with the best of them, but she was long gone. Suzi Quatro played the glam game but Patti Smith was something quite unique. Punk before punk existed, she dressed like a man, cursed like one, sang with a sneer and a lascivious leer of a voice. She really was quite iconic. She pre-dated punk/new wave by a year here, almost seeming to anticipate it. There is a convincing case for this being one of the first true punk albums. To an extent, though, as there was still a lot of rock in Smith and her band's music. The "punk" came from the attitude.

Her cover of Van Morrison's Gloria with her own added lyrics - "Jesus died for somebody's sins but not mine..." has an in-your-face punky energy that never lets up for a minute. The original was good, but this is surely the definitive version.
The reggae-tinged and mysterious Redondo Beach continues the beguiling quality before the first of the stream of consciousness pieces in the "poem set to music" of Birdland. Patti narrates her poetry over a stark, grandiose piano backing before being joined by some searing guitar that surely David Bowie was influenced by for his "Heroes" album three years later. I have to admit that it is an acquired listen and it grates just a little by the end of the track, but that still mustn't be allowed to detract from its brilliance, and its remarkable imagery. "Her eyes were just two wide opals...". By the end of it you feel that Jim Morrison had a daughter and here she was. 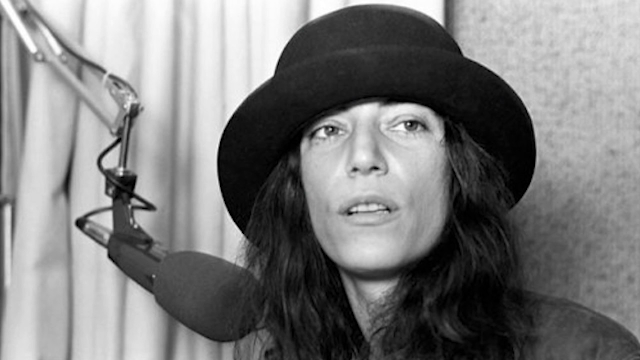 Free Money is a piano-driven slow burning rock number, with a rumbling bass line and some haunting vocals. There is some muscular rock guitar and drums on it, particularly when the tempo kicks off after a while, in a Velvet Underground fashion. It ends in a crescendo of rolling, rattling drums and Smith spits out her lyrics with yet more pure punk energy.

My favourite has always been the thumpingly insistent, powerful and seductive Kimberley, with its killer organ swirl and guitar. Smith's vocals on this are superb.
The wailing guitar-driven Break It Up is excellent too, almost anthemic in its chorus.
The closer in all but name, Land, is the other stream of consciousness track, the equivalent of The Doors' The End. This is an exhilarating track. When Patti sings "well do you know how to ponaaay, like Bony Moronaaay..." and the riffy guitars kick in it is one of the best moments on the album. For 1975, it is an incredibly adventurous, ground-breaking piece. When Patti rants away near the end you know just what Siouxsie Sioux was listening to in late 1975/early 1976. Elegie is a sombre, mournful, dare I say elegiac end to the album.

The Velvet Underground, The Doors, David Bowie, Lou Reed's solo material, The New York Dolls. They are all in here but the result is something palpably unique. 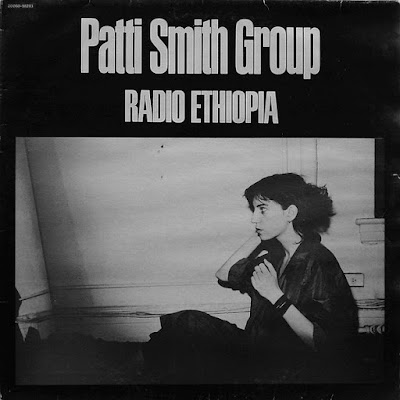 This was Patti Smith's second album, following the critically well-received Horses and it became somewhat controversial, for two of its tracks considerably overdid the improvisational poetry set to music thing. It meant that it was not well-received but that serves to overlook the fact that there are four excellent tracks on here.

Ask The Angels is a fantastic riffy, rock opener that found its way onto many a punk playlist. Rightly so, too, its is pure punk as far as I'm concerned. It was the first Patti Smith song that I ever heard, back in 1977, and I loved it from that moment on.

Pissing In A River is similarly dark, although more chunky in its slow-paced rock backing. Again, Smith's voice is extremely charismatic. Pumping, the third killer cut, rocks in gloriously punky style, chock full of energy and verve. The final good one, Distant Fingers, has a most appealing sightly reggae-ish backing and a vocal that tells you exactly where Debbie Harry got her influence from. If you didn't know you would say this was Blondie.

Radio Ethiopia is nine minutes of nihilistic Smith-rock, with Patti ranting away incomprehensibly over a chugging and often discordant rock beat. Yes, it goes on way, way too long but you can't deny that it has a sort of dirty, sleazy atmosphere. Many critics debate as to whether its was boundary-pushing or merely a gross example of self-indulgence. It was probably the latter, as it is not the easiest of listens. Abyssinia merely adds two more minutes to it. Give me Ask The Angels or Pumping any day. 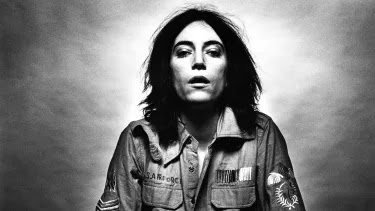 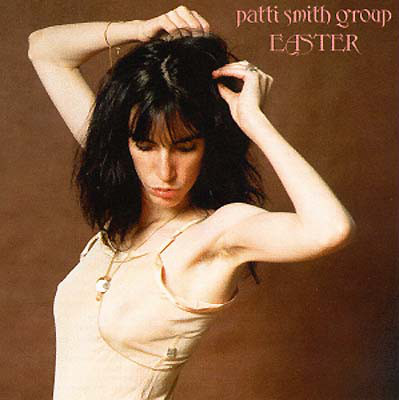 Till Victory/Space Monkey/Because The Night/Ghost Dance/Babelogue/Rock 'n' Roll Nigger/Privilege (Set Me Free)/We Three/25th Floor/High On Rebellion/Easter
Patti Smith had not released anything for two years after suffering a stage fall and subsequent injury. This was her third album and is the most well-known, largely because of the huge hit single it contained. It was released into the whirlpool of punk/new wave and further cemented her annointance as the "high priestess of punk" - spiritual Godmother to all the Siouxsies, Slits, Poly Styrenes, Gaye Adverts, Runaways and Toyahs out there. At the time, the album was hailed a bit like that - "you like Siouxsie?", now here's the real thing..." and so on. Personally I always found Smith to be more of a rock artist with a rebellious, don't give a .... punky attitude, as opposed to a bona fide punk. This album probably backs that up. It is a rock album, really, with clear punky and post-punk overtones.

Patti liked to make a statement, usually through her lyrics/poetry. Here, she did it by sporting unshaved armpits on the cover. Although to bother about it at all might be seen as shallow, she knew exactly what she was doing by her pose.

The album kicks off with the punky, riffy Till Victory which laid down the markers the album. This sort of thing fitted right in with the milieu of early 1978.
Space Monkey combines a delicious post-punk sound with a genuine Stones influence and distinct echoes of Dancing With Mr. D. Patti found time in it to narrate a bit of her avant-garde poetry, briefly, too. 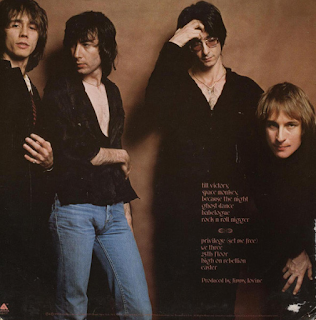 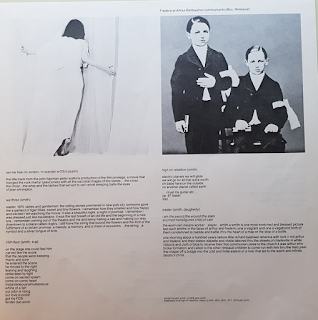 The big hit, of course, was the cover of Bruce Springsteen's Because The Night. Springsteen, at the time, was still a relatively "cult" artist, particularly in the UK, so it made little impact that this was one of his songs. It was taken in isolation, appreciated for the great rock song it is, and duly charted. It remains Smith's only chart hit. The producer of this album, incidentally, was Jimmy Iovine, who also produced Springsteen's classic Darkness On The Edge Of Town in the same year.

Ghost Dance is a mysterious, semi-chanted song featuring Native American lyrics in places. It owes a lot to David Bowie, for me, just in its feel, somehow. There was nothing "punk" about it, that's for sure.
Babelogue is an f-word strewn narration of a stream of consciousness poem, recorded live. Bizarrely, the crowd clap hysterically along to her rabid, rapid-fire utterances, as if to give it a rhythm. The poem morphs dramatically into the magnificent riffs of Rock 'n' Roll Nigger, which was actually a pretty good representation of punk, in both delivery and ethos. It is one of the album's high points. "Outside of society...." the song proclaims. If that wasn't punk, then what was, I guess.

Up next is the album's other classic, the Gothic rock of Privilege (Set Me Free) which builds up with a churchy organ backing before the riffs and Patti's soaring voice kick in. It is full of religious references and a delightfully rebellious vocal. Great stuff. We Three is a beautifully deep, torch song-style mournful but deliciously bassy rock ballad. Smith's vocal is once again superb, as is the atmosphere.
25th Floor is another great, riffy rock song with a punky undertone and ambience. High On Rebellion is a forerunner of grunge, an assault of guitars, drums and angry vocals.
The album ends with the grandoise Easter, featuring Smith's plaintive vocal over a single beat and some superb guitar. Once more, it is full of religious imagery. Smith was eaten up with religious confusion long before Madonna. As for "Girl Power", this was it, nearly twenty years earlier. 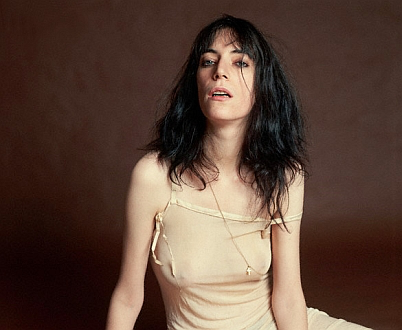