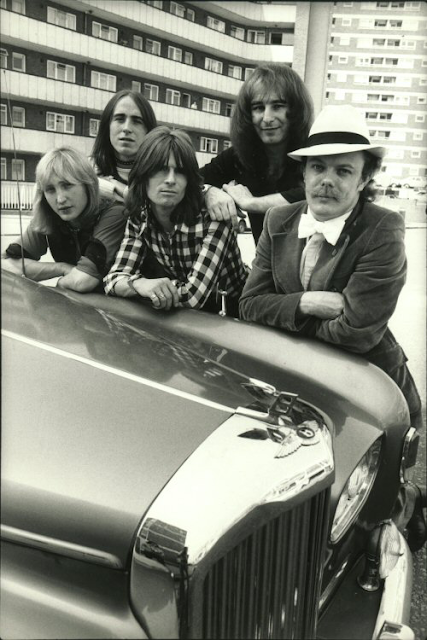 Mott were a spin-off from the legendary Mott The Hoople, after the departure of Ian Hunter. Bassist Overend Watts, drummer Dale Griffin and late-coming pianist Morgan Fisher remained.

They were nowhere near as good as their predecessors, it has to be said. 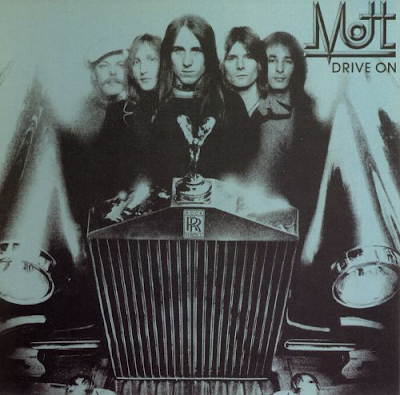 My favourite band in the 1970s was Mott The Hoople. After they had split in October 1974, I stuck with charismatic lead singer Ian Hunter as he put out his solo work, which was, and still is, excellent. Then there was the rest of the band. What should I do about them? They formed the spin-off group, "Mott", no longer containing the by now iconic Hunter, or guitarists Mick Ralphs or Ariel Bender. Only drummer Dale "Buffin" Griffin, bassist Overend Watts and latter-day pianist Morgan Fisher remained. They were joined by guitarist Ray Major and "Spinal-Tap"-esque lead singer Nigel Benjamin, complete with high-pitched "heavy rock" squeal and a harlequin one-piece suit. Oh dear, oh God, oh my-oh.... (check out the Friars Aylesbury website. I was at the gig, in June 1976).

I stuck with them for this 1975 album, out of some sort of loyalty, a bit like watching a favourite footballer at the end of his career, plying his trade in the lower leagues. There were just a couple of moments on this album, but they really were just split seconds, to be honest. The overall sound is one of bombastic sub-heavy rock, characterised by Benjamin's voice, which certainly wasn't to my taste. Ian Hunter's Dylanesque big anthems had gone, and Mott The Hoople's Stonesy rockers too. The influence now were a sort of Deep Purple meets Black Sabbath sort of thing. 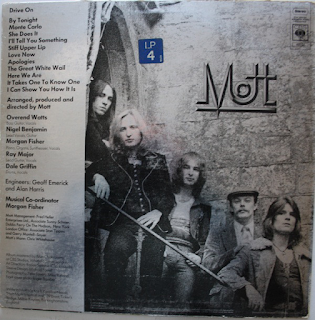 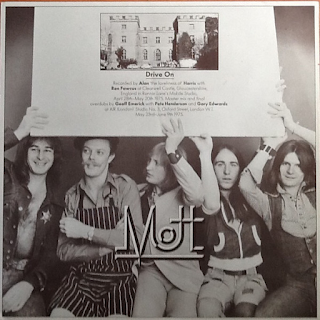 The opener, By Tonight, is actually my favourite track, written by Overend Watts, as indeed the whole album is, it has a killer introductory riff, some great guitar and Benjamin's most convincing of his vocals. It would have been ok as an MTH track, to be fair. Some Hunter-esque piano at the end from Fisher.
Monte Carlo starts with a solid enough trademark rock riff, but soon enough Benjamin begins his high-pitched wailing. It sort of spoils what was an acceptable enough rocker. Sorry, Nigel, your voice just wasn't for me.
She Does It is a lively and catchy rocker and I'll Tell You Something is a competent rock ballad I guess. The problem with this material, though, is that it had just lost the MTH je ne sais quoi, that something that they had, for those great four or five years (particularly the last two). After this, the album goes downhill rapidly.

Stiff Upper Lip is awful, to be honest, trying to ape MTH's Pearl'n'Roy and Violence and failing, badly, while Love Now employs those hackneyed heavy rock cliches in its lyrics - "I want love, I want it now, not in five minutes, I want it now...". The big heavy riffs are impressive, but it all just made me think "is this what MTH had come to?". Overend Watts had previously contributed only the somewhat laboured Born Late '58 to Mott The Hoople's body of work. Now he was writing a whole album, and, unfortunately, his limitations showed. Now I loved Overend as part of Mott The Hoople and felt so genuinely sad when I heard of his passing last year, but getting back to business, this album just doesn't do it.

The Great White Wail has another chugging riff and then it descends in to some more cod-heavy rock vocals. The chorus refrain is reasonable enough, but this is very definitely fourth division stuff. admittedly there is some impressive guitar near the end of this track, but I just can't get past this not being anything like Mott The Hoople, really. It is, I know, partly my problem. I know there are some people who love this album. Maybe I just can't see it.

On Here We Are, Benjamin attempts a lower key, more romantic ballad-ish vocal. It all sounds a bit flat to me, although the backing on the song is vibrant enough, it all goes a bit 'prog rock", with several changes of pace and style.
It Takes One To Know One is full of cliches and is best left behind. The opening piano to I Can Show You How It Is has echoes of Ian Hunter but, unfortunately, that's as good as it got for what was a bit of a dirge, with a dreadful, singalong chorus.

Sorry lads, you know I love you, but this wasn't for me. Funny thing is, though, every now and again I dig this album out and play it! 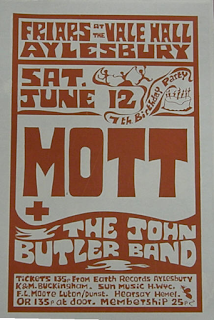 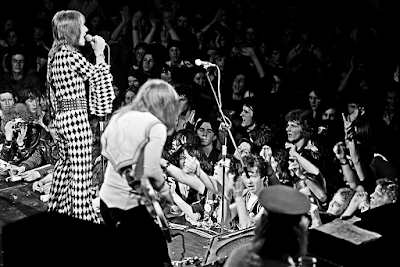 For more information re: Mott at Friars, Aylesbury, check out https://www.aylesburyfriars.co.uk. 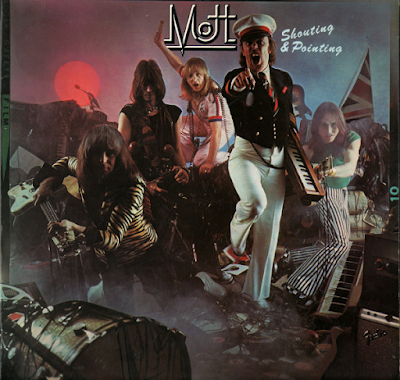 Firstly, let me make it clear for those who may not be aware, this is not Mott The Hoople, its is Mott, the post-Ian Hunter band containing original MTH members, bassist Overend Watts and drummer Dale "Buffin" Griffin and latter-day pianist Morgan Fisher, plus Spinal Tap-esque high-pitched vocalist Nigel Benjamin and lead guitarist Ray Major. I know there are a few people out there who did like this incarnation of the band, but they never did it for me, and in many ways, I found them a sad postscript to the history of such an iconic band. The music they produced was "heavy rock by posturing numbers" and nothing like either the shambolic fun of the original Mott The Hoople or the infectious glam rock of the 1972-74 years. To be frankly honest, with punk sweeping all before it i 1976-77, Mott were an embarrassment, showing all the stereotypes that Spinal Tap lampooned so well. The band's first album Drive On had a couple of reasonable moments. This one really doesn't have many at all. I saw Mott live in 1976 and felt the same then as I do now. I feel bad about that, as Mott The Hoople were "my band" through my teenage years.

Shouting And Pointing is redeemed by Morgan Fisher's excellent piano and some good mid-track guitar, but otherwise it is dominated by Nigel Benjamin's high-pitched vocal and various "heavy rock" clichés.
Collision Course is a typical, instantly recognisable song from bassist Pete "Overend" Watts, similar to Mott the Hoople's Born Late '58. It is probably one of the best tracks on the album. Watts' voice wasn't great, but I much prefer it to Benjamin's.

Storm is an ok rocker, to be fair, but again the falsetto squealing vocals at times are irritating. Unfortunately, Career (No Such Thing as Rock 'n' Roll) sees composers Benjamin and Fisher trying to recapture Ian Hunter's wry, observational songwriting style in a sort of re-write of The Ballad Of Mott The Hoople. While Fisher's piano is impressive, the whole thing just sounds like a sad attempt to recreate former glories. 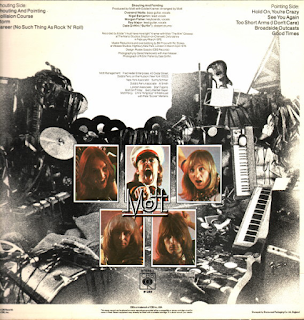 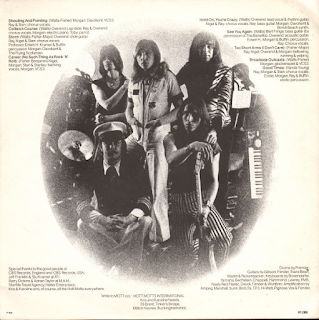 Watts' Hold On You're Crazy is another riffy number but it is nowhere near as good as Collision Course and it all sounds very third division, to be honest. Even some Deep Purple riffage an't really save it. Overend contributes another number in the bluesy rock of See You Again, which is ok, but certainly nothing special. In an album of pretty poor, muffled sound quality, this track has the best audio. Fisher contributes a nice bit of piano at one point too.
Too Short Arms (I Don't Care) rocks averagely, and Broadside Outcasts has hints of The Small Faces, for me, anyway. Either way, it isn't much cop.
Good Times is an Easybeats cover and again, it just sounds decidedly average. Yes, it rocks, but this stuff just can't hold a candle to anything Mott The Hoople released, whatever some say. 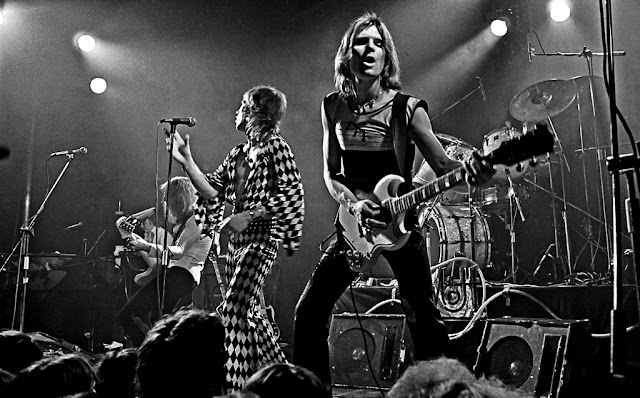