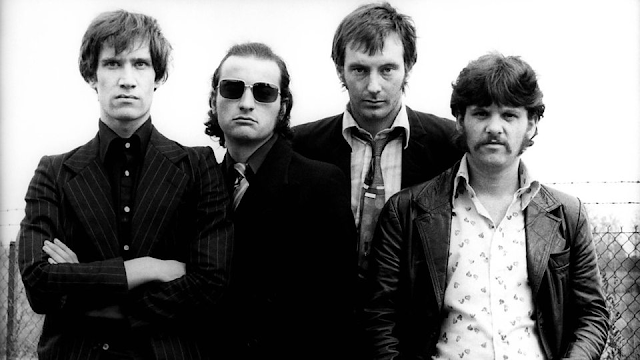 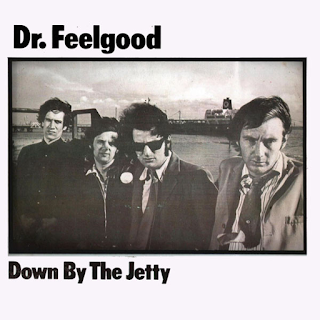 It is amazing to think that this seminal breakneck r'n'b (in its essential rock sense) album was released at the beginning of 1975 when glam rock had only just fizzled out and prog rock was all around. Punk had not even been conceived of, or indeed any backlash against established rock genres. Pub rock had been around in the form of Brinsley Schwarz and Graham Parker was beginning to get himself heard, as would be the soon to be formed Eddie & The Hot Rods, but it was Dr. Feelgood who really seemed to take off with the public. As a Mott The Hoople/Bowie/Roxy Music loving teenager, I remember being initially sceptical when these disturbingly (and comparatively) short-haired, down-dressed oiks from Canvey Island, Essex came on the scene with their mid-sixties r'n'b, fast paced, short, sharp shock music. For a short while, I didn't buy into it. Then, all of a sudden, I did. The energy, excitement and back to basics attitude suddenly clicked in my brain and provided my first experience of the buzz that punk would give me just over a year later.

These blokes were punk before punk, with a UK down at heel ordinariness that the glam posturings of US pre-punks like The New York Dolls would never have brooked. Like Graham Parker, guitarist Wilko Johnson was a classic anti-hero - a pudding basin hair-doed geek with a guitar. Singer Lee Brilleaux was a kind of whisky chaser-swilling Southside Johnny lookalike and drummer "The Big Figure" was a mysterious character similar to The Stranglers' Jet Black. These dodgy Essex geezers had the same sort of appeal as The Ramones would nurture a year later. The music's brevity and sheer speedy power was similar too, although the Feelgoods' material was steeped in the blues rock of the mid sixties, with several covers included on their albums and in their stormtrooping live set 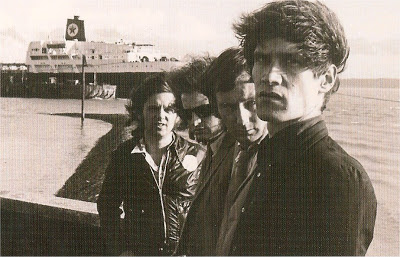 The songs are all in a similar vein - mostly around two and a half to three and a half minutes in length, full of pacy, metronomic drumming, rumbling bass and stabbing blues guitar. The vocals were less contrived than those of Mick Jagger (The Stones' first album was a big influence on this one) and are grittier than Eric Burdon's of The Animals. Highlights are the toe-tapping opener, She Does It Right;  the John Lee Hooker/Animals cover in Boom Boom; the staccato riffs and throbbing bass line of Roxette and the frantic yet catchy bluesy romp of All Through The City. So many bands were influenced by both the group's music and their attitude. The importance of this album cannot be overstated. It is possibly the UK's first pre-punk, punk album, if you know what I mean. The retro nature of the material, however, means that can't be considered as musically ground-breaking, but in terms of providing a cultural sea-change, it was right at the forefront.

With regard to the sound quality, either the 2006 or 2012 remasters are simply superb, with a pure speaker-shaking, big, bassy mono coming straight out from the centre of your speakers. Never mind The Beatles In Mono, this is one of the best mono recordings around. 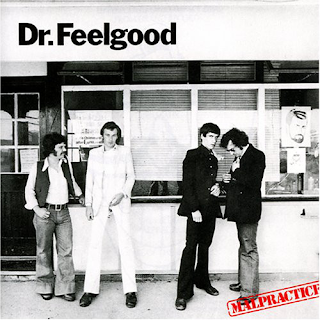 Eight months after their excellent, energetic debut of barnstorming r'n'b in its purest form, Dr. Feelgood were back with more proto-punk frantic bluesy stompers. Their hair was even shorter now (in comparison to the flowing tresses of the prog-rockers all around them in 1975), their clothes shabbier and their attitude even surlier. These were four miserable characters (supposedly), but they came alive on a beer soaked wooden stage. So many punk bands would follow Dr. Feelgood's lead. Think of The Stranglers, or Eddie & The Hot Rods or 999 and many more.

This album also saw them break into the top twenty. The first foundations of punk were laid here.

The album is in stereo (the previous one had been in a stunning mono), but this still has a big, thumping bassy sound, as it should do. Highlights are the rocking I Can Tell; the infectious and riffy blues of Back In The Night; a cover of the blues classic Rolling And Tumbling and the prison rock of Riot In Cell Block No. 9. For me, you can't beat the sheer r'n'b joie de vivre of Going Back Home. In that track is the essence of Dr. Feelgood. Great stuff. The group also showed a slight versatility and a willingness to deviate ever so slightly from the all out r'n'b attack on the Beatles-esque Watch Your Step and the extended guitar interplay of Because You're Mine. 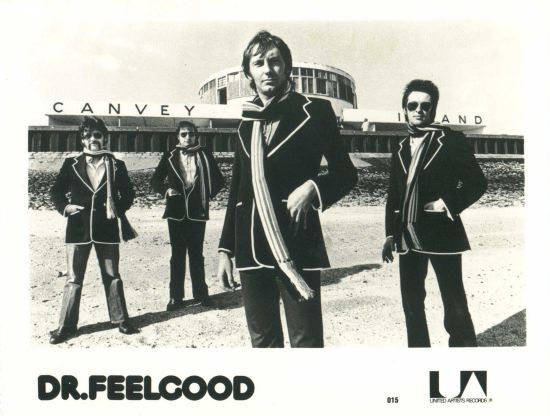 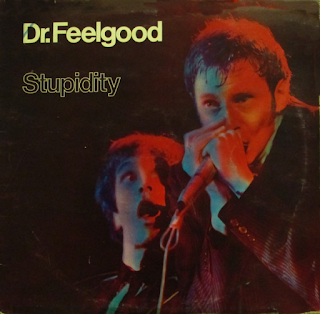 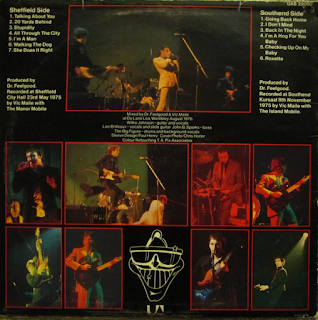 What can be said about these frantic, down and dirty live recordings of Canvey Island r’n’b masters Dr. Feelgood recorded at gigs in 1975 in Sheffield, their (relatively) home turf of Southend and Aylesbury. This refers to original thirteen track Stupidity album, plus the two extras released as a 7” single, the last of which, a frenetic Johnny B. Goode was recorded at Friars, Aylesbury.

All the music is played with an incredible energy, capturing the sweaty, vibrant atmosphere of a Feelgood gig perfectly. You get the right mix of well-recorded sound and crowd noise to make it feel as if you there. Nicely remastered too. Big and bassy. To be honest, Feelgood can play so well, that the live versions are not much different to the studio ones save the “live atmosphere” thing. You get the impression they could just pick up their instruments at any time and play this stuff virtually in their sleep. Guitar, bass, pounding drums, harmonica and a vocal straight from a pint and a chaser at the bar. Those are the simple ingredients, and boy, do they work.

Wilko Johnson’s guitar is wonderful throughout, as are Lee Brilleaux’s vocals. Great stuff. Not much more can be said. If you like breakneck, rhythmic r’n’b like Walking The Dog and I'm A Man, you will love this. Feelgood's own tracks are great too, of course.

Unusual thing was, at the time of release, Dr. Feelgood were something of a cult band with a loyal live following but no real chart or national radio presence, yet this album went straight to number one in the album charts.

My personal highlight - All Through The City. Man, that riff. Actually, add She Does It Right to that. Impossible to sit still listening to it. 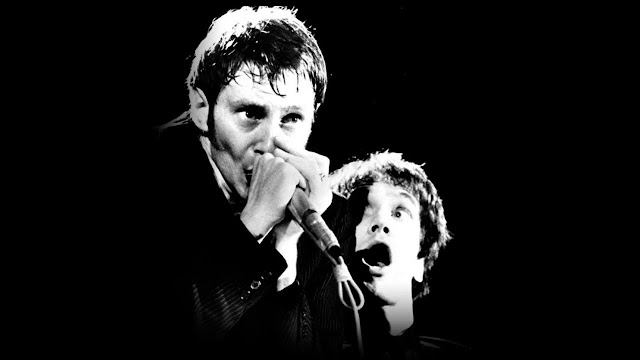 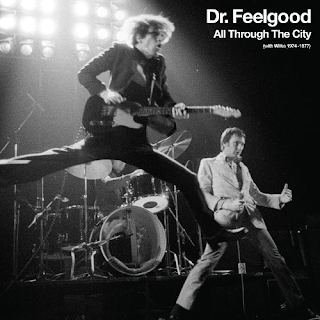 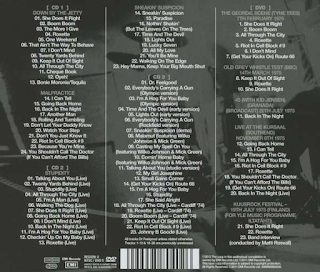 This box set covers the first four Dr. Feelgood albums - Down By The Jetty, Malpractice, the live album Stupidity and Sneakin’ Suspicion. It is a wonderful collection of the finest, down and dirty, pure rocking r’n’b to come out of the UK. The sound is remastered here and is as good as I have ever heard it. The debut album is still in is original mono (the only way it was ever recorded), but on here it packs a real punch and makes your floorboards shake. Malpractice is much better sounding than any previous incarnations, as indeed is Stupidity, the band’s now legendary chart-topping live album that brought them to the nation’s attention back in 1975.

In many ways, Dr. Feelgood were a precursor to punk rock - full of attitude, sub three minute thrashes of songs, played at breakneck pace. They played packed, sweaty small venues and made the walls drip. When punk arrived, the Feelgoods remained respected, by pretty much everyone.

The Sneakin’ Suspicion album is not quite as good, but only a little bit. All the material is enjoyable. There are a fair few extras- demos, unreleased tracks and the like. There is nothing Dr. Feelgood put out that is not enjoyable, to be honest. This is just a great testament to what a sensational band they were. This is them at their early, energetic, scintillating best.