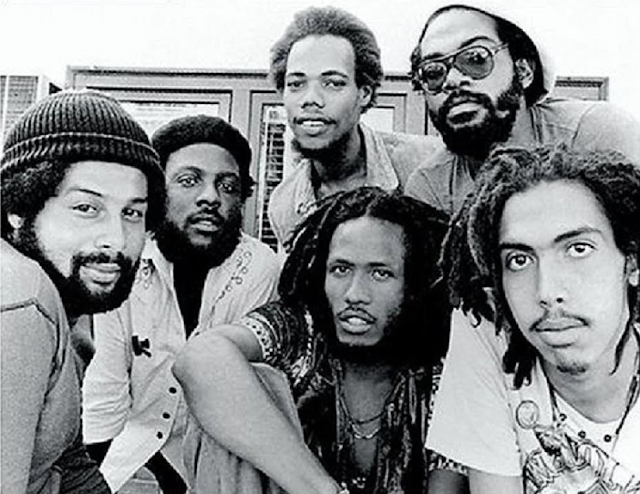 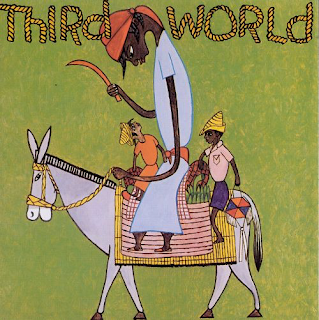 It is a shame that Third World, a mid-late seventies reggae band but one influenced not only by the reggae of their native Jamaica, but also by disco, soul and funk, were often not given the respect or credibility they deserved from reggae "purists". Many such people accused them of "selling out" both to other types of music and also commercially. as I said, this was a real pity, because they were a excellent band, producing three great albums - this one, 1977's 96º In The Shade and 1978's Journey To Addis. They recorded many more after that, but you can't go far wrong with their first three as an example of a genuine reggae fusion band at their very best. Also, the artwork on the covers of these albums is wonderful too.

The criticisms are off the mark, particularly on this excellent debut album. Roots reggae is all over it. From the rumbling bass and conga potency and roots power of the opener, Satta Amasa Gana to the roots consciousness of Slavery Days, roots ideologies are right at the centre of much of this album. They have taken these tracks, from The Abyssnians and Burning Spear, kept their roots essence but put their own stamp on them and they should be praised for it. 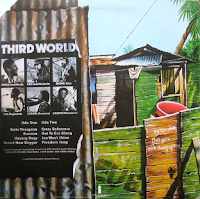 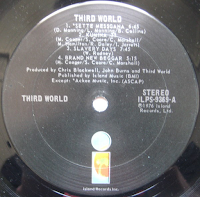 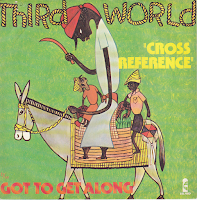 Kumina is a brief interlude of tribal/Rastafarian-style drumming before we are led by a throbbing bass and a lilting lead guitar into the cover of Burning Spear's 1975 classic Slavery Days. Third World turn it to a seven minute reggae meets jazz meets funk cooking, atmospheric triumph. It has a most unexpected jazzy ending too.

Brand New Beggar is a pulsating number, with a soulful vocal and backing organ/percussion feel to it. It was these soul stylings that were used so successfully on the band's two huge hits, Now That We've Found Love and You've Got Me Dancing on The Floor. 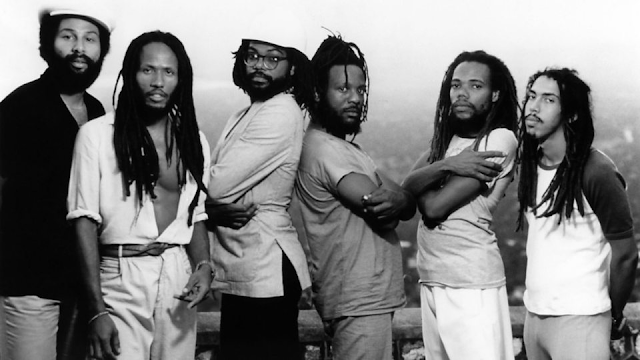 Cross Reference is another Rasta-chant interlude, this time with some searing rock guitar licks at the end. Roots, Rock, Reggae, for sure. Then we get a sublime, laid-back, summery reggae/jazz/soul ballad in Got To Get Along. Beautiful. It could almost be Harold Melvin & The Blue Notes. Again, another stonking piece of guitar at the end. Third World's fusion is always interesting and alluring. It should never be unfairly criticized. Nobody else was really doing full albums of this sort of musical variation within the reggae genre. Some blues harmonica introduces Sun Won't Shine and some stabbing, spacey synthesiser sounds before some skanking reggae kicks in. Freedom Song has what sounds like a horn solo, but is probably a keyboard, another track where traditional Rasta philosophy is given a musical boost by the integration of other styles.

The non-album extra track, the band's first single, Don't Cry On The Railroad Track has a conventional reggae backing, but an O'Jays style soulful vocal.

The sound quality on this remaster is excellent. Clear, sharp percussion and warm, thumping bass. Just as it should be. 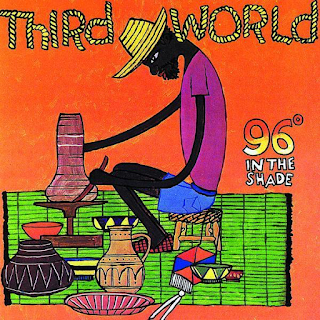 After an impressive, inventive and often inspirational debut album, the intriguing Third World returned in 1977 with this equally notable album.

Theirs was a mesmerising mix of roots reggae, soulful vocals, disco stylings on occasions and many “world music” sounds. The opening track, Jah Glory, is a perfect example of this - great, airy, tuneful vocals and all sorts of tropical sounds in the backing. Just perfect music for a hot summer’s day. There is, of course, a rasta consciousness to the band’s lyrics but it never overwhelms the music, that washes over you like a cool Caribbean breeze. 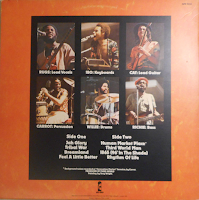 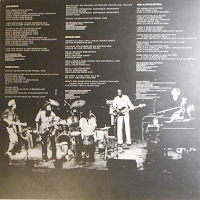 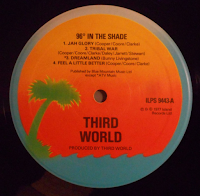 Tribal War is a Rasta-drum rhythm backed intoxicating groover, backed by some seriously “crucial” lead guitar and some deep, urgent lyrics. This is one of the most “roots” tracks on the album, suitable for any “punky reggae party” playlist. The mood changes now for the truly beautiful Dreamland, a cover of Bunny Wailer’s track from his Blackheart Man album of the previous year. This is a light, airy version that sweeps into your room like opening the window on a sunny day. Feel A Little Better has that thumping disco groove that the band used so successfully on their hit single Now That We’ve Found Love - harmonious vocals, rhythmic drums and some cutting, razor-sharp guitar interjections. The beat is hypnotic on cuts like this. Third World at their very best. 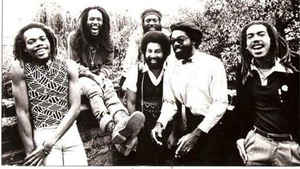 Human Market Place is the most melodic condemnation of slavery there is. The song has a tragic, serious message over an insistent, solid, dubby rhythm, with a great vibes solo bit in the middle and some excellent bongos. It also features some sampled “sound effects” market place hubbub noises that add to the atmosphere. Great bass on it too.

Third World Man features some top class vocals and some almost electronic backing in places. Some stunning guitar in the middle passage. Like Peter Tosh, Third World were afraid to utilise rock guitar.

96˚ In The Shade just exudes heat. It is simply one of the best hot day songs ever. An exhilarating backing, one used so much by UB40 on their Signing Off album three years later. Some Spanish guitar adds even more to the hot, summery feel. This is not an album to play in the winter.

Rhythm Of Life has an almost rock-style drum intro and is a potent but incredibly catchy number, with a singalong chorus refrain. It also has a sort of jazzy drum solo piece in the middle. It is a positive, upbeat end to a highly pleasurable album. The band’s debut album was good, but this one is even better.

As always, an excellent cover, too. 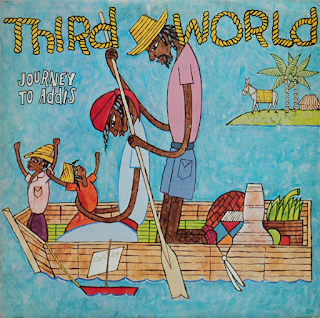 This was Third World's third studio album, and, following on from the appealing 96º In The Shade is further cemented the switch from pure, rootsy reggae to a fusion of reggae and soul. That said, there was still a solid roots vibe and message to the band's material. As always with the early Third World albums, it had a great cover.

One Cold Vibe (Couldn't Stop Dis Ya Boogie)
begins with a little bit of prog rock-style keyboards before it kicks into an airy, breezy, crystal clear percussive easy reggae groove. Lead vocalist Bunny Rugs had a great, laid-back and melodious voice. It was perfect for this type of soulful, almost jazzy reggae. There was still a bit of Rasta message, however, spiritual matters were never far from the surface in Third World's music, but it was never hard-core roots. The rhythms, though, are incredibly intoxicating.

Cold Sweat gets into that effortless groove that just makes you want to be in the Caribbean under the sun. The percussion is just so good. So clear and sharp. Mix that with a big, rumbling bass and you have a great sound. Cool Meditation, as the title would suggest, ploughs the same furrow. Rugs's voice is higher-pitched on this one, but wonderfully delivered. It also features some Stevie Wonder-style harmonica, unusual for a reggae track. 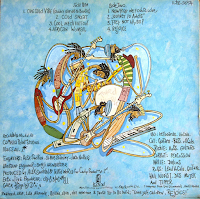 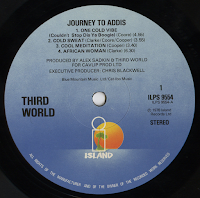 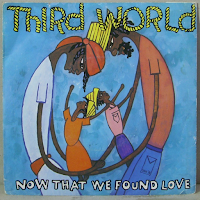 African Woman is a slow burner with an almost funky bass line and a deep, thumping rhythm. Some lovely guitar swirls around this track. Now That We've Found Love was, of course, their massive "fusion" hit - combining easy skanking reggae, soul vocals and disco vibes, it appealed to a wide variety of record buyers. This wasn't surprising, it is a great track with an infectious summery feel and an instantly memorable, singalong hook.

Journey To Addis is a sumptuous instrumental, with some funky wah-wah guitar, killer lead guitar and big rubber band bass. This a great stuff, that bass line is superb, as indeed are the horns. UB40 surely took a lot of influence from this. Fret Not Thyself is the album's first true Rasta devotional, with "trust in Jah Lord..." lyrics. Rejoice is a socially conscious, soulful number also with Rasta sentiments to finish what was a positive, feel-good album. Recommended. 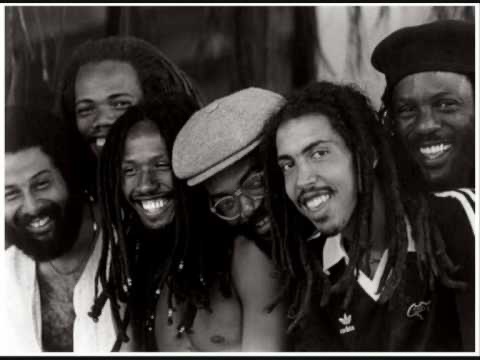