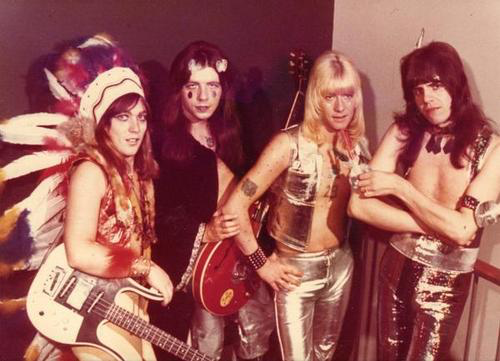 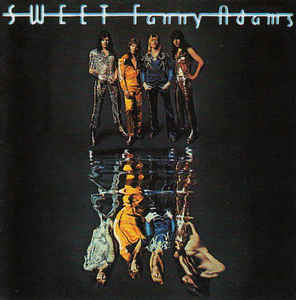 After several massive “glam” hit singles in Blockbuster, Hell Raiser, Ballroom Blitz and Teenage Rampage, Sweet finally decided it was time to put out a credible album. They longed to be more than a pop singles band and wanted to show that they could rock. This was, in that respect, not a bad effort. It did not contain a single on it and only two tracks were penned by Nicky Chinn and Mike Chapman, their hit single songwriting team. Most of the album was written by the band themselves.

The opener, Set Me Free, was a Deep Purple-inspired rocker as indeed was the next track, Heartbreak Today,  - all Black Night - style riffs and high pitched Gillan-influenced vocals. It had a good hook and would have been perfectly acceptable as a single. For some reason, Sweet never quite made it as serious rockers, although their albums sold considerably in Germany and Scandinavia. Heartbreak Today inexplicably ends with a short burst of funky guitar.
Chinn and Chapman’s No You Don't has airs of Teenage Rampage about it in places, mainly in the verses. It would not have had any impact as a single, though. It has a sort of “prog rock” type instrumental bridge in it as well, which doesn’t quite fit. Some interesting instrumentation though. The album is remastered excellently, it has to be said - the sound is big, punchy and powerful with a nice rich bass sound. 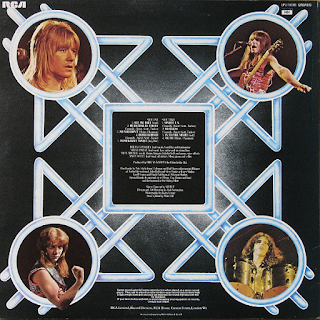 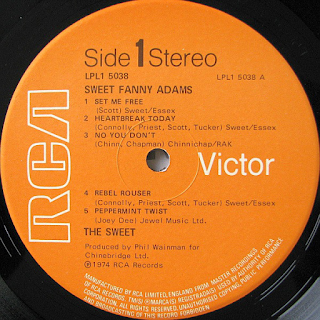 Rebel Rouser has a rollicking drum intro that sounds like The Rubettes or Mud and a typical Sweet verse/glam chorus structure. It has major hints of Hell Raiser in places and Ballroom Blitz too. Very derivative of their other singles, to be honest.
Peppermint Twist is a cover of an old late 50s rock ’n’ roll number that doesn’t quite fit with the supposed “heavy rock” vibe of the album, but I suppose they were trying to put something in to keep the glam fans happy. As a kid, when I bought this album, this was my favourite track, unsurprisingly, just as I liked Slade’s Let The Good Times Roll. 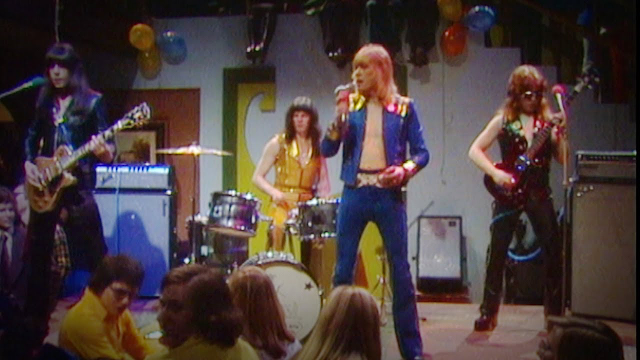 Sweet F.A. is probably the most credible song on the album, six minutes long, featuring some great riffage and an insistent beat, and some convincing, cynical lyrics about not taking any more. A sort of Deep Purple meets Mott The Hoople.
Restless and Into The Night are both competent, heavy rock by numbers songs, sounding very much like typical band-penned ‘b’ sides. The latter has a blatant drum rip-off of Golden Earring’s Radar Love, however.

The final track is the other Chinn-Chapman song, AC/DC, and it was a vibrant, glammy rocker with one of those instant, catchy choruses. Those pounding Rubettes drums appear again! This would also have made a good single.

This is a fun memory of the summer of 1974, but it is only an album that finds its way on to my speakers every four or five years I’m afraid. 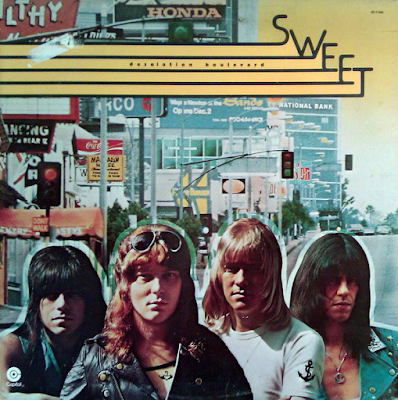 After earlier in 1974's proto-punk bubblegum rock of Sweet Fanny Adams, Sweet returned with another album that attempted to show off their credentials as a "serious" rock band, not just a vehicle for those great Chinn/Chapman-written glam rock hit singles. Again, it was certainly not a bad effort and is a credible solid rock album, full of heavy riffs but with those trademark hooks as well. The album gained The Sweet a huge following in Germany and Scandinavia, who treated them seriously, whereas in the UK, it was their singles that characterised them in people's minds, and their many Top Of The Pops appearances.

The Six Teens was a hit single. It is a glorious, singalong rock anthem with an absolute killer of a chorus. It was one of only two Chinn/Chapman songs on the album.
Solid Gold Brass was written by the members of the group, and it is an  impressive rocker, with some cute guitar/drum interplay in the middle. As with the rockers on the previous album, it had big hints of Deep Purple about it.
The other Chinn/Chapman track was the riffy rock of Turn It Down. It was actually an unsuccessful single in the UK, the first in God knows how many singles not to make the Top Ten. I am not quite sure why, because it's great.

The slightly proggy rock of Medusa had a great bass line and a bit of a feel of The Who to it. It features some convincing guitar soloing that you wouldn't necessarily have associated with Sweet.
Lady Starlight had echoes of Noddy Holder of Slade in the chorus vocals, otherwise its verses were a bit dreamy and lacking in punch. It sounds like a typical glam rock, band-penned, seventies 'b' side to me.

The Man With The Golden Arm was an Elmer Bernstein number from 1956. Sweet's cover here lasts over eight minutes and fuses hard rock, some Deep Purple-style falsetto vocals and big band brass backing rather in the way that Alice Cooper did on Grande Finale from his 1971 School's Out album. There is some impressive drum soloing from Mick Tucker, presumably to show just how rock" they could be, but it does smack a little of indulgence, to be honest. The band were looking to split from Chinn/Chapman and duly did so around this time.
Fox On The Run was their first band-penned single and it was a big hit. It is a big riff-heavy rocker but with an irresistible chorus.

The riff attack continues on Breakdown, a solid enough non-glam rocker. The final track on the original album was a cover of The Who's My Generation. It is done convincingly enough and suits The Sweet. The sound quality on this remastered edition is excellent and there are some bonus tracks, including the non-album glam rock single Teenage Rampage and several 'b' sides. 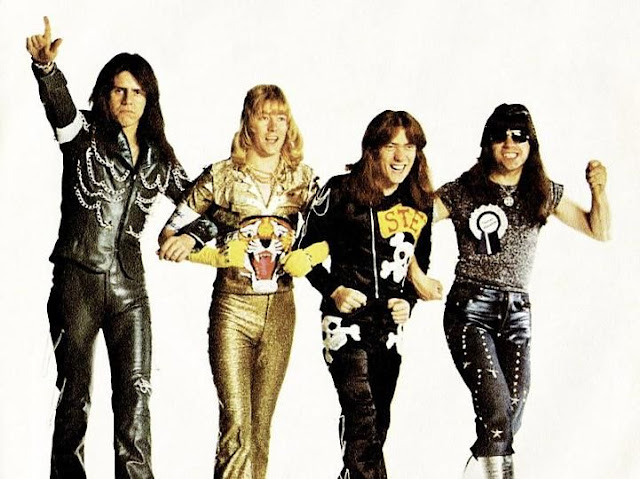 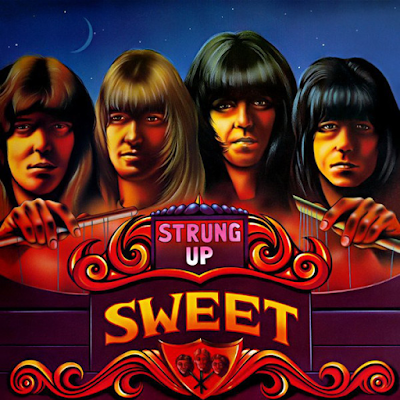 Singles, 'b' sides and album tracks/Action/Fox On The Run/The Lies In Your Eyes/Fever Of Love/Set Me Free/Miss Demeanour/The Ballroom Blitz/Teenage Rampage/Burn On The Flame/Solid Gold Brass/The Six Teens/I Wanna Be Committed/Blockbuster/Hell Raiser
After two highly credible riff-heavy rock albums in Sweet Fanny Adams and Desolation Boulevard, both from 1974, Sweet split from glam rock hit single composers Chinn and Chapman and, unfortunately for them, their gradual decline started here. This was a strange release, to be honest - a double album (expanded now on CD) that featured a two year-old live concert recording from 1973 at the height of their glam rock success, and a compilation of singles, album tracks from their previous two albums and some of the self-penned 'b' sides they always insisted upon. Unsurprisingly, it wasn't a good seller. Having said that, its still a great listen in retrospect. 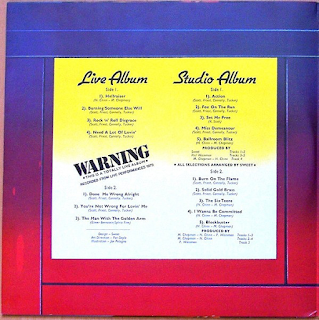 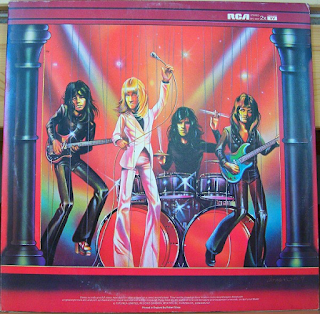 CD 1 is the live material from London's Rainbow in December 1973. While the sound is little "iffy", it is certainly still listenable and has a real live atmosphere about it, capturing a band who always were a great live act, much better than they were ever given credit for, a bit like Slade in that respect. The way the band attack some of their slightly ordinary 'b' Sides like Burning, Rock 'n' Roll Disgrace and Need A Lot Of Loving is impressive to listen to. They turn them into different tracks. There is also the decidedly risqué Someone Else Will, as well as the crowd pleasers. An oddity is the folk-rocky You're Not Wrong For Loving Me, which sounds like the sort of thing Mott The Hoople tried on their 1971 Wildlife album.

I have to say there was something rather punky about Sweet, three years ahead. The pace doesn't let up here. Fair play to them. Solid stuff.

CD 2 obviously has its share of glam rock classics - Blockbuster, Hell Raiser, The Ballroom Blitz  and Teenage Rampage. Plus there are some Sweet rock hits like Action, Fox On The Run and The Lies In Your Eyes. The rocking Solid Gold Brass and Set Me Free show them finding their "serious" rock side and Miss Demeanour and the T. Rex-ish I Wanna Be Committed are, firstly, an impressive 'b' side, and, secondly, a previously unreleased Chinn/Chapman song. 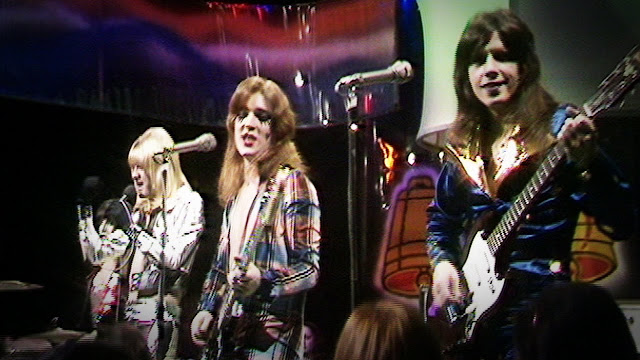