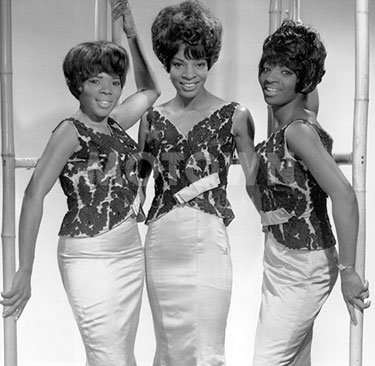 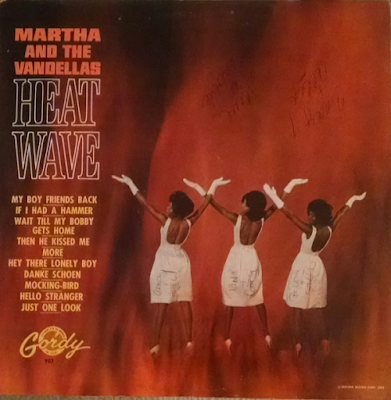 This was Martha Reeves & The Vandellas' debut album, and, while it suffers a little from being a typical early/mid sixties Motown album, i.e. a vehicle for a couple of great hit singles filled out with cover versions of popular songs from the time, this is not a bad offering. The sound quality is good too, stereo as well.

The opener, (Love Is Like A) Heat Wave, is a copper-bottomed Motown gem from the opening drum beat through its joyous horns and beat to its great vocals from Martha and the girls. That saxophone backing too. Awesome.
The ballad Hey There Lonely Boy was a hit in 1974 in the UK for Eddie Holman in its Girl format. More was a movie theme that sounds quite dated now as indeed is Danke Schön (sung strangely by Martha as "Danke Shane").

The jaunty If I Had A Hammer is always difficult to resist. It suits the group perfectly. Then it is time for a couple of Phil Spector numbers, the romantic Then He Kissed Me (I still prefer The Crystals' version, however) and the lively fun of Wait Till My Bobby Gets Home. The latter matches Darlene Love's original.
Hello Stranger is a nice, typical 1963 Motown smoochy number, with its "shoo-bop-shoo-wop" nods to rock 'n' roll.

Just One Look was a hit the following year in the UK for The Hollies and Doris Troy had originally done it. It is much better here as a soulful Motown number than The Hollies sixties jangly pop version of it.
The Angels' My Boyfriend's Back proves no problem for The Vandellas. Mockingbird was originally done by Inez and Charlie Foxx. Once again, it is covered impressively, then we get Heat Wave mk. 2 in the similarly infectious Quicksand. Yes, there are lots of covers on here, but it is still very listenable. 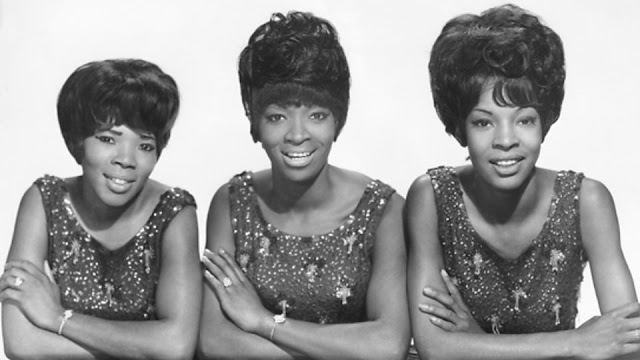 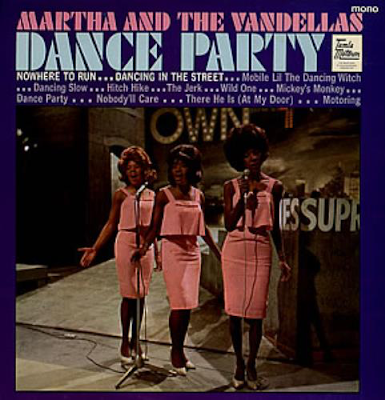 Dancing In The Street/Dancing Slow/Wild One/Nowhere To Run/Nobody'll Care/There He Is (At My Door)/Mobile Lil The Dancing Witch/Dance Party/Motoring/The Jerk/Mickey's Monkey/Hitch Hike
Motown albums in the sixties were somewhat strange things (as in many ways most popular music albums were). They were, first and foremost, a vehicle for several top notch hit singles. Included with these would usually be the singles’ often high quality ‘b’ sides, and the rest of the album would be largely filled with the group’s interpretations of other artists’ Motown hits of the time. This 1965 album from Martha Reeves & The Vandellas was certainly no different. Despite that, though, it is a good album - vibrant, captivating and suitable, as the title suggests, for a dance party.

Let’s deal with those singles first. The group’s biggest ever hit single, the iconic Dancing In The Street, with its irresistible horn riff and “calling out around the world, are you ready for a brand new beat..” opening lines, was a cornerstone of “The sound of young America”. A joyous, uplifting anthem of unity and simple pleasure that was released into a social milieu of race riots and the Vietnam War. Its impact cannot be understated.
Similarly, the pounding, thumping powerful glory of Nowhere To Run is just so instant and so representative of everything that was wonderful about Motown in 1964-65. Martha’s vocal on the track is outstanding, the backing by The Funk Brothers is peerless - big, rumbling bass, rhythmic tambourine and those powerhouse drums. The parts where the beat leaves just the drums and Martha’s voice for a split second (“when I look in the mirror, to comb my hair”) are some of my absolute favourite bits in all Motown recordings. Indeed, in all music.
Then there is the rousing, soaring, energetic Wild One. Lesser known, perhaps, but no less invigorating. Diana Ross may have been Motown (and Berry Gordy’s) preferred option, but Martha Reeves had the voice. Not half did she.

Dancing Slow is a mid-pace, soulful, catchy number that does what it says, it grooves nice and slow. Lovely bass throughout and saxophone at the end and sensual vocal from Martha.
Nobody'll Care could have been written as a Northern Soul number - upbeat, danceable, full of beat and vitality. Once again, superb vocals from all the girls. Motown heaven.
There He Is (At My Door) is a soulful, brassy, mid-paced number, certainly no filler, while Mobile Lil The Dancing Witch, despite the odd title, is a wonderful slice of Southern/Stax-style horn-driven, down ’n’ dirty soul.
Dance Party is a relatively “b’ side sort of a song, but it still cooks. Martha could make even the lightest of songs cook.

Motoring is a pumping, bassy, hard-driving pleasure to listen to. The Jerk is a dance-craze song and a bit throwaway, but it suits the theme of the album, in a “let your backbone slip, swing your hips” sort of way. Listening to this album, I am amazed at the sheer quality of the musicianship on here. The Funk Brothers sounded as if they could lay down this stuff in their lunch hour.

The sound on this album is excellent and good quality stereo, considering the album dates from 1965, something that shows just how in advance of UK studios American ones were in terms of recording technology. 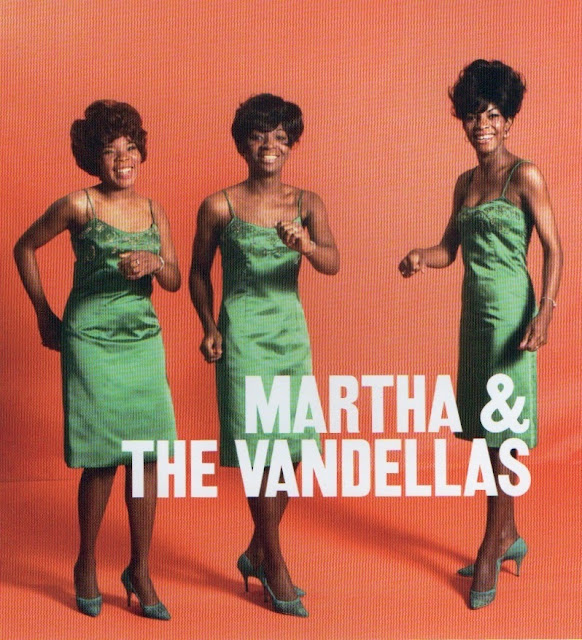 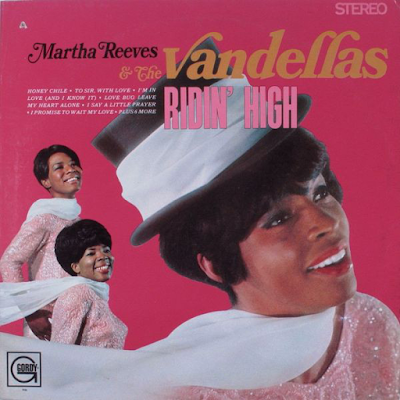 Martha Reeves & The Vandellas suffered a little from the abrupt departure of the Holland/Dozier/Holland songwriting team from Motown records (only track 4 is an HDH song). However, this is not too bad an album, as late sixties Motown albums go. Of course, there are the usual covers of contemporarily popular pop standards but there are four great hit singles and a few other good ones too.

The cover sees Martha and the girls looking like air hostesses (with Martha wearing a top hat) in a pose very much of its era.

I Promise To Wait My Love is a slightly funky, Stax-sounding soul cooker of a track. This is certainly not "filler", it is a great track.
Honey Chile was a hit single and stomper it was too, featuring a soaring vocal from Martha and a great backing.
There's Always Something There To Remind Me had been a hit for Sandie Shaw in 1964, by now in 1968, it already sounds a bit dated, despite its pure pop appeal.
Leave It In The Hands Of Love is a classic, little-known great Motown song. Love Bug Leave My Heart Alone falls into the same category with some classic buzzy guitar and a killer Motown bass line.

I'm In Love (And I Know It) is another upbeat Motown number that echoes back to early hits like Quicksand. Time for another mid-sixties cover - Lulu's To Sir, With Love. Martha does it full justice.
Forget Me Not is one of Motown's first songs to reference the Vietnam War. While its sentiments are not anti-war, they are still saying that the singer wants her man back from overseas as soon as possible. It is a moving song. It became a big hit in the UK three years later, in 1971, when it had even more relevance as the war had still not ended.

(We've Got) Honey Love was another great single and one not always mentioned. Aretha Franklin's I Say A Little Prayer is a brave cover but Martha is a strong enough vocalist to handle it. It doesn't match the original, of course, however.
Without You and Show Me The Way were also both on single releases. The latter is the better of the two. This album was probably the group's last big album as a hit-making Motown group. 1972's Black Magic was surprisingly good, but that was right at the end of their ten-year career. 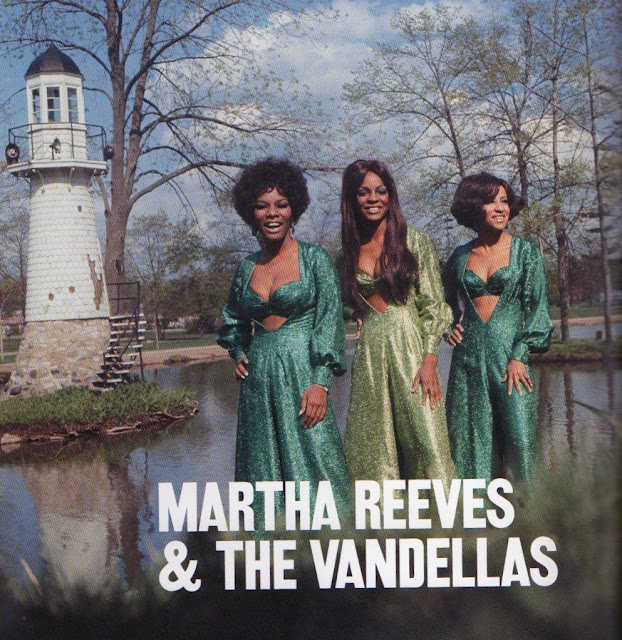 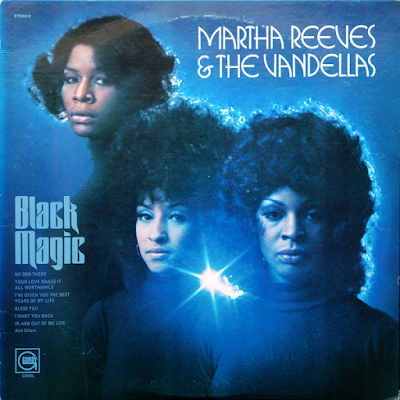 This was was Martha Reeves & The Vandellas' final Motown studio album. It featured two new Vandellas and, despite the group being near the end of their glorious road, it has a bit of an understated, little discussed appeal to it. There are real throwbacks to the group's classic years in places. It is, however, quite an incongruous work, in comparison to the socially conscious material Motown put out by Marvin Gaye, The Temptations, The Undisputed Truth and Stevie Wonder during the same period. It is rather similar to the albums that The Supremes in their Diana Ross-less incarnation released in the early seventies too. I have to say that it has been remastered superbly and has an impressive warm, bassy, stereo sound.

There are some underrated tracks on the album, such as the post Diana Ross Supremes-ish, easy groove of the opener, No One There.
Your Love Makes It All Worthwhile is a lively, handclappy echo back to the early/mid sixties. By 1972, it would be considered a song done in nostalgic style. It has a Northern Soul feel about it. Some infectious percussion at the end too. On late sixties/early seventies Motown albums, it seemed obligatory to cover a Beatles track, usually an "easy listening" one too. Here it is George Harrison's Something. Martha does it justice, of curse, but it is totally inessential.
Benjamin is a bit of a cheesy, big production ballad, but it has its moments. It is very "supper club" fare, however. There were always a few tracks like this on any Motown albums.

Tear It On Down is a different matter - a big, brassy, punchy number chock full of full-on soul. It is the last great track from this seminal group. A typical "psychedelic soul" buzzy guitar introduces another fine track in I've Given You The Best Years Of My Life. What a voice Martha Reeves had. Always in the shadow of Diana Ross, unfairly in my opinion, this track exemplifies just how strong her voice was. Was there time for one more copper-bottomed, joyful Motown classic? Of course there was - the glorious joie de vivre of Bless You. That great Motown sound never dies with singles like this - that trademark beat, the deep, sonorous saxophone break in the middle and the soaring vocal. Motown heaven.

I Want You Back is a cover of the iconic Jackson 5 number, but done slightly differently with a new introduction and a funky, jazzy feel in places. If it wasn't for the Jacksons' version, it would be pretty impressive. As it, you just can't help thinking of the wonderful original.
In And Out Of My Life is a  an uplifting mid-pace sixties-ish Motown number. Anyone Who Had A Heart is the Bacharach/David song made famous by Cilla Black. Here it is done very much in the style of Dionne Warwick's original recording of the song. Both hers and Reeves' versions walk all over Black's one.
Hope I Don't Get My Heart Broke may be grammatically incorrect, but it is soulfully on the ball. Big and powerful. This was Martha Reeves last track on her last Vandellas album. It was a great one on which to end the truly classic era of her career, 1963-1972.