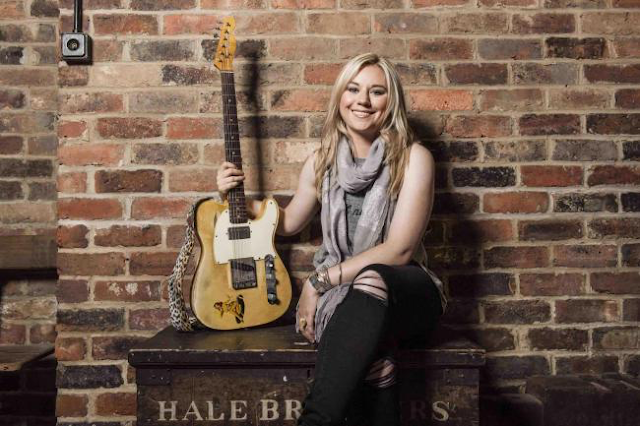 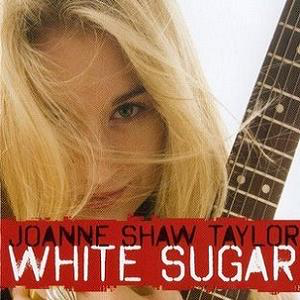 Joanne Shaw Taylor is from Wednesbury in the West Midlands, not from the Mississippi Delta, would you believe.

This, her assured debut album from 2009, is certainly an impressive offering of earthy blues rock. Compared to 2014’s comparatively “in your face” all out, bombastic blues rock guitar and throaty voice attack, this is a slightly more subtle affair. The bass is certainly more inventive and melodious and some of Joanne’s guitar work is stunning, such as the outstanding solo on White Sugar, and on Time Has Come for that matter.
Tracks like Kiss The Ground Goodbye and Just Another Word have the requisite blues power but they also have a warm, appealing melodiousness that is lost in the more edgy, more outright “rockier” material of the afore-mentioned later album. Even an all out slow burning rocker like Watch 'Em Burn has a tuneful bass underpin to it. Everything is pretty much perfect on this breathtaking debut.

Pretty much every track has a killer solo from Joanne on it. The drums are clear and powerful and the bass is as I said before. The musical set up is a basic one - guitar, bass and drums - but it is perfect here. Listen to the deep, rumbling intro to Heavy Heart and then Joanne’s deep, rich blues voice kicks in. This is a great track. Excellent guitar and bass interplay at the end of this one. Blackest Day, the album’s closer, is seven minutes of slowed-down, sexy, soulful blues rock heaven.

As with most blues rock material, there is not a huge amount of variation, either musically or lyrically. You don’t suddenly get a funk number or a piano ballad or some vaudeville, (as on a Queen or Paul McCartney album). What you get is honest, straight down the middle blues rock. 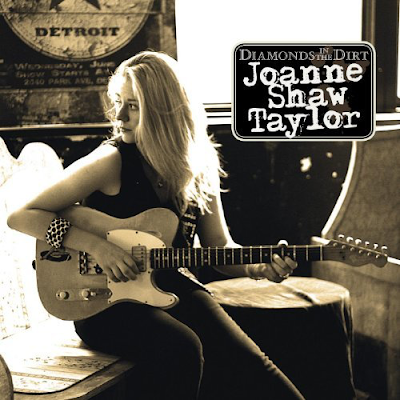 After her stunning debut album 2009’s White Sugar, West Midlands blues girl Joanne relocated to the USA (which would obviously suit her music) and produced this album in 2010.

Just listen to the opener, Can't Keep Living Like This. A slow, acoustic beginning and some ethereal, late night lyrics for a while and you are lulled into a false sense of security and think “Joanne’s changed her style and gone all reflective” and then BOOM! The drums, bass and her searing guitar kick in and we get four or five minutes of full on, gravel-voiced earthy blues rock heaven. The quality continues with the rich, warm power of the cooking Dead And Gone. Lordy, this girl can play the blues!
The cleverly-titled Same As It Never Was has a nice, tuneful, more subtle opening, with a great bass line underpinning. Joanne’s voice is lovely on this one too, showing she can vary the tone when required. 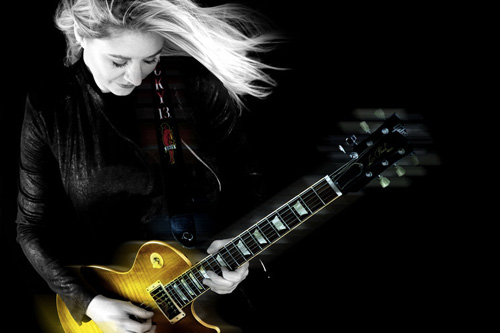 As on White Sugar, there is a killer guitar solo on literally every track. Jump That Train is a Southern-style blues Gregg Allman would have been proud of.
Who Do You Love continues the high standard, with more great guitar and a good slow bit in the middle and the title track, Diamonds In The Dirt, has a knockout soulful vocal over an intoxicating backing.

Look, I could go on, track after track. This is simply a great album. It blows you away. Another reviewer somewhere has said it is “the mutt’s nuts”. They are dead right. And some. 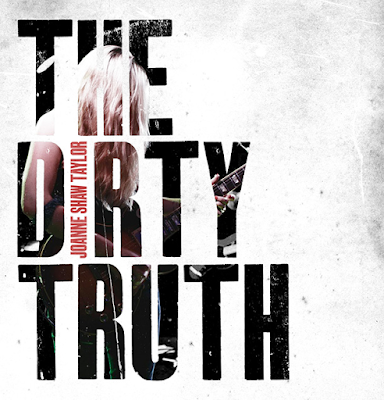 Mud Honey/The Dirty Truth/Wicked Soul/Fools In Love/Wrecking Ball/Tried, Tested And True/Outlaw Angel/Shiver And Sigh/Struck Down/Feels Like Home
As I have said in the previous reviews - would you believe this girl is from Wednesbury in the West Midlands? She sounds like she could be from the backwoods of Kentucky or the Mississippi Delta. With a voice like she gargles on Jack Daniels and razor blades she plays a dirty, mean blues guitar.

Released in 2014, Joanne admitted she was aiming for a more full on, denser, edgier, rockier feel to this album. Some fans have not liked this so much, but there again, many have. This is a kick posterior copper-bottomed quality hard blues rock album. Recorded, apparently and suitably, in Memphis.

Kicking off with the storming guitar rocker, Mud Honey, the tone is set for the whole album. Although the album is studio recorded, there is an almost "live" feel to it, as if everything has been recorded in one take. Whether that is the truth or not, it certainly sounds like it.
The Dirty Truth, the title track, is a rumbling, slow burner with just magnificent blues guitar on it and, of course, Joanne's voice is just incredible. She is the real deal.

There a lot of these female blues rockers around at the moment - Susan Tedeschi, Joanna Connor, Grace Potter and, of course, the grand old lady of the blues, Bonnie Raitt. While somebody like Bonnie certainly had her soft moments, Joanne Shaw Taylor ain't no soft, fluffy lady, even when singing of love, such as on the slow, emotional but tough Wicked Soul. Her throaty fire always burns hot. She doesn't let up. Not her style. Great guitar on this one too, as indeed on most of them.
Fool In Love has a nice, less "in your face", slightly more melodic vibe to it and Joanne shows she can soften the tone just a little bit. The song still rocks though. Another impressive guitar part half way through. 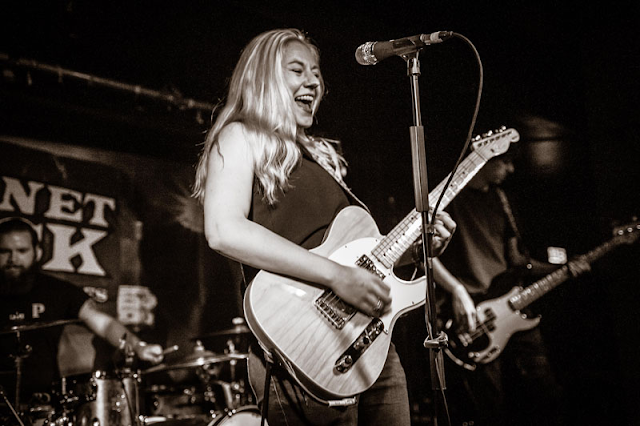 Wrecking Ball (not the Bruce Springsteen song of the same name) has a sort of funky drum rhythm to it and Tried, Tested And True is another comfortable, slow sad one with Joanne giving it her best Janis Joplin.
Outlaw Angel sees a return to upbeat, rocking blues. Shiver And Sigh has a great bass and drum intro before Joanne's guitar joins in and then her soulful vocal.
Struck Down has a riff from somewhere that I can't quite place, a punk song from way back, maybe, The Vibrators, possibly. No matter. Feels Like Home is a bit staccato like Wrecking Ball.

Personally, I prefer the slightly subtler, more melodious tones of her 2009 debut, White Sugar, but that is just my opinion. This is still a good album.

The live cuts are delivered pretty true to the studio versions. The sound quality is good on them too.What you don't get with quite a lot of blues rock material is too much lyrical (or often musical) variation and I have to admit that is true here but a bit like with, say, roots reggae, it doesn't really matter. Play this and it is an invigorating 45 minutes or so. 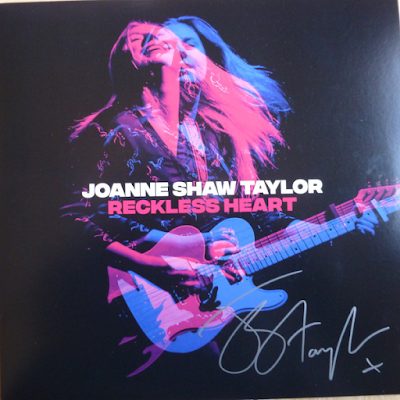 Joanne Shaw Taylor’s output is usually steeped in blues rock. This album, however, is far more pure rock in nature. It is crammed full of sledgehammer drums, rocking guitar riffs and Joanne showing just how her remarkable voice can really rock. It is a most enjoyable album from a very talented, underrated artist.

In The Mood is a superb, pounding bar-room guitar-driven rocker to open the album with that doesn’t let up from beginning to end, with Joanne’s voice in magnificent form.
All My Love has an infectious, slightly funky bass line and it is a more rhythmic number than the previous all-out rocker. The guitar solo just slashes through the atmosphere, though. Despite that, however, there is a fair amount of soul on this one.

The Best Thing is just wonderful. Joanne’s voice is once more incredibly soulful on this one. So unique yet at the same time really reminds me me of someone but I can’t put my finger on who, which is frustrating. Either way, she is great in her own right on this. Actually, maybe it’s Grace Potter.
Bad Love is powerful, riffy and with a sumptuous organ backing too. The pace is so strong and solid on tracks like this.
Proper rock.
Creepin' is a slow-paced. muscular bluesy rock number. I've Been Loving You Too Long is even more laid-back, in its pace, anyway. The sound is still full and strong, with an impressive guitar intro before Joanne's smoky voice arrives, seductively.

Reckless Heart is a throaty, husky slow burner. Break My Heart Anyway is a relatively quieter, slower pace, acoustic-backed ballad.
New 89 has some catchy guitar backing and another appealing, gritty vocal. Jake's Boogie is not, as you might imagine a bit of piano-driven bar-room rock, but a bluesy, acoustic guitar-powered somewhat understated song with a bit of a slurred vocal from Joanne, which is unusual. It does grow on you, though, and provides a change from the full-on rock of the rest of the album.
Strangely enough, after such an upbeat, powerful album, the final track, I'm Only Lonely, is also a slowie, being a sleepy rock ballad. It has some sumptuous guitar/bass interplay near the end. Apart from these two tracks the album does not vary much, being pretty relentless. Therein lies its strength - you know what to expect. None of the tracks particularly stick in the mind, but, listened to as a whole, the album has an energetic, no nonsense and soulful vibe to it. As I said earlier, for me, it is not as bluesy as her other albums, but it is not without its rocky appeal. 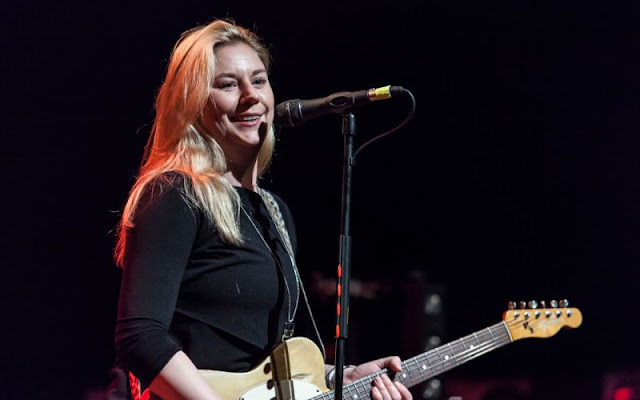