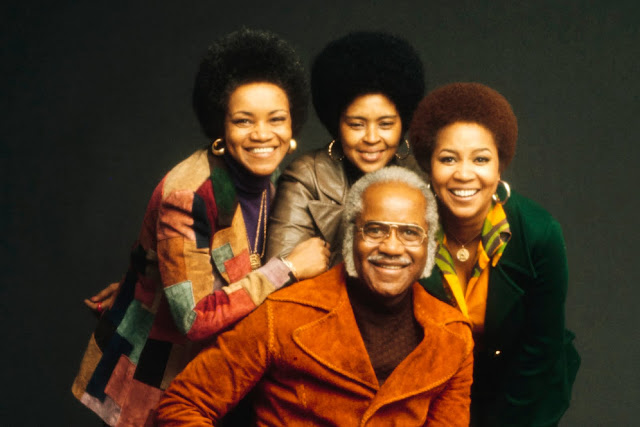 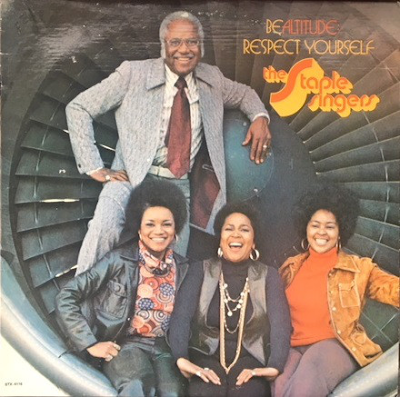 This is marvellous stuff. Gospel/soul fusion perfection from one of the seventies' most potent and influential vocal/horns backed groups. I also have to make the point that this Stax remaster is absolutely top notch. The big, bassy, brassy, punchy sound and Mavis Staples' soaring lead vocal come thumping out of your speakers. The best I have ever heard the material.

This World is an absolutely stonking opener, full of gospel verve and vigour and captivating drum rhythms. Can that be beaten? Sho'nuff it can - by the wonderful, pounding Respect Yourself. Great rhythm, great vocals, great lyrics. A superb civil rights anthem. "Take the sheet off your face, boy, it's a brand new day...". Indeed. Just check out those horns too.
Name The Missing Word has a magnificent, pulsating bass line and a killer vocal. It has sweeping soulful strings, soaring horns and menacing guitar. As for the vocal, it is just peerless.
Then there is I'll Take You There, an anthemic, uplifting anthem of a song that has become known by so many. It is probably the group's most famous number and rightly so. From the first notes of that Liquidator-style intro and then the syncopated rhythm topped off by Mavis Staples' "mmm, hmmm" gospel vocal it is an absolute delight. The music is played by the Muscle Shoals Rhythm Section, superbly, as indeed they do on the whole album. 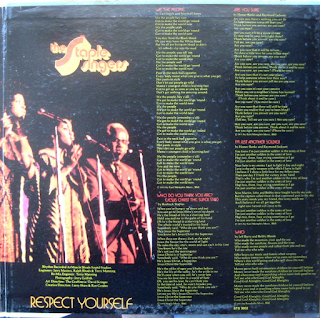 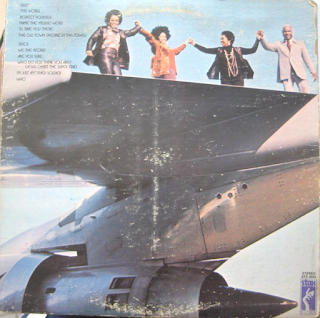 This Old Town (People In This Old Town) is a catchy, upbeat, but brooding and soulful cooker of a track. Some of the guitar on these tracks, played by Eddie Hinton, is simply superb. Again, Mavis's vocal is a titanic, towering one. She had one of the truly great gospel/soul voices but never quite got the credit she deserved. She is rarely mentioned in lists of the great soul voices, which has to be wrong.
We The People is superbly funky and oh man, those Stax horns. Are You Sure has a delicious bass line rumbling under the laid-back but insistent quiet, assured vocal.
Who Do You Think You Are (Jesus Christ Superstar?) is a somewhat pious, devotional song, with "Pops" Staples on vocals this time. It still has a great soul feeling to it.

Just Another Soldier is an uplifting slice of gospel soul. The Stax horns drive it along as Mavis's voice soars once again.
Who is a shuffling piece of praise. The final two tracks are bonus numbers. Walking In Water Over Our Head is an irresistibly catchy, Motown-influenced number. Heavy Makes You Happy is an alternate version of the groups' earlier hit single.

This is a highly recommended example of gospel/soul Heaven. Let it lift you up. 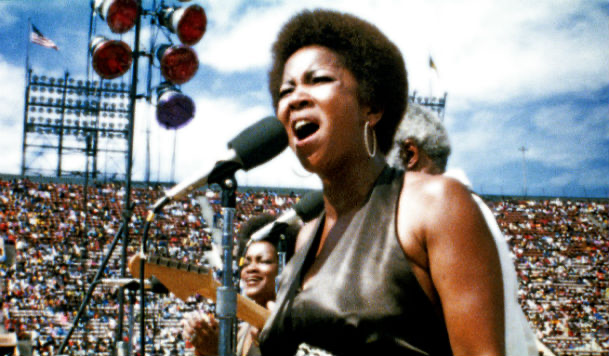 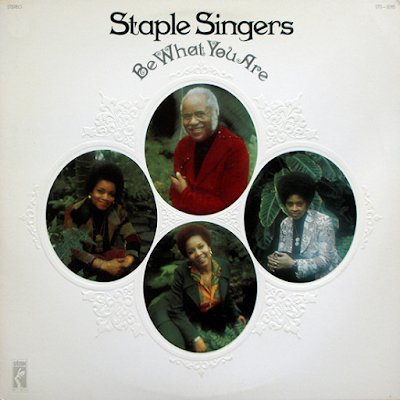 Be What You Are/If You're Ready (Come Go With Me)/Medley: Love Comes In All Colours- Tellin' Lies/Touch A Hand (Make A Friend)/Drown Yourself/I Ain't Raisin' No Sand/Grandma's Hands/Bridges Instead Of Walls/I'm On Your Side/That's What Friends Are For/Heaven
After the uplifting gospel soul of Be Altitude: Respect Yourself, The Staple Singers were back the following year with this excellent album. Although the gospel influence is always there this is a bit more of a punchy, horn-driven soul album. The hard-hitting messages are still there, of course. The Staple Singers always had something wise to say.

The album starts with the brooding, soulful groove of Be What You Are, featuring those trademark Stax horns and the expected great vocal. The classic, infectious If You're Ready (Come Go With Me) is next, with its killer riff that was appropriated by Hot Chocolate for both You Sexy Thing and also  Don't Stop It Now, to an extent.
The lengthy Medley, which is basically two songs - the soulful, "message" song of Love Comes In All Colours and the cynical put-down of Tellin' Lies - is sublime in the delivery of both songs. Both are full to the brim with soul. 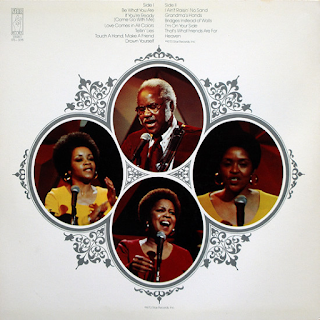 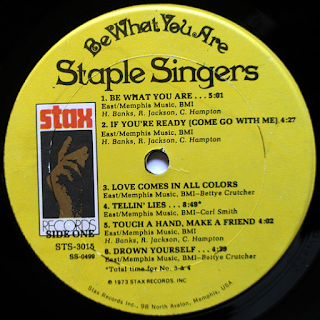 Touch A Hand (Make A Friend) drives me mad because it reminds me so much a of subsequent song by someone else but it is going round in my head and I can't put my finger on it. Either way, it is an irresistibly catchy number. Again, the message is one of love and tolerance.
Drown Yourself is a gloomy song about reaching the point of no return. The backing is suitably sombre and bluesy. Here the message is one for those who have no love in their hearts for anyone or anything. They might as well head down to the river and drown themselves. Indeed.

I Ain't Raisin' No Sand is an infectious, semi-funky grinder with some sublime brass sections and a super-funky vocal from Mavis Staples. It ends with a superb bit of funky voice/percussion/guitar interplay.
Bill Withers' Grandma's Hands is given a brassy, gospelly makeover. Bridges Instead Of Walls (how relevant once more is that nowadays) re-works the feel of If You're Ready slightly in its rhythm. Again, its message cannot be argued with. I'm On Your Side is a beautiful ballad, packed full of Stax soul.

That's What Friends Are For is a deliciously funky/brassy/soul/jazzy number with superb vocals and backing. It doesn't get much better than this.
Heaven is a big orchestration ballad with the gospel influence making itself known. Overall, this has been an outstanding album, slightly better than the previous one, although both are excellent. Highly recommended (if you can get hold of it, which is difficult). 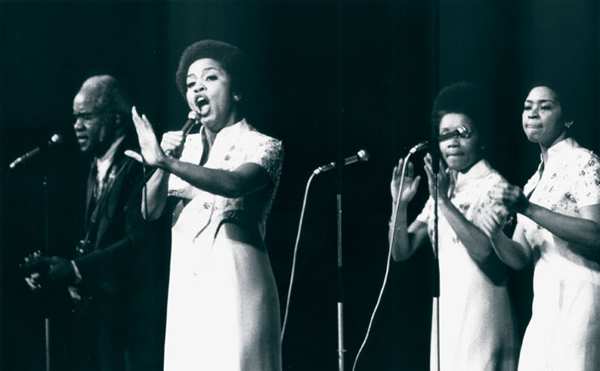 The Best Of The Staple Singers 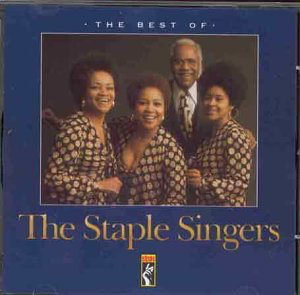 This is a wonderful compilation of the best of this iconic gospel/soul group, whose peak years were in the early/mid seventies. The vocals, led by Mavis Staples, were absolutely superb and uplifting and the music was full of typical Stax horns and infectious funky soul rhythms. The lyrics were spot on with regard to their message, which was one of racial equality, and end to discrimination and an increase in tolerance between everyone. The message was not delivered with aggression, it was done so with a gospel fervour and vitality that was totally captivating. 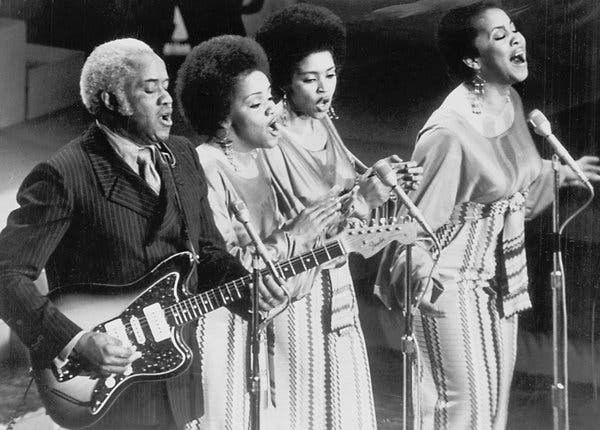 The highlights on here are many, but the obvious ones are the bassy, catchy I'll Take You There; the earnest, pumping soul of Respect Yourself; the intoxicating riff and vocal of If You're Ready (Come Go With Me) and the funky Heavy Makes You Happy.
Lesser known tracks but just as irresistible are the ebullient, pounding This World; the effervescent, call to self-awareness of Be What You Are and the annoyingly familiar Touch A Hand, Make A Friend that sounds so like something by someone else, subsequently, but I cannot put my finger on what it is. There is also a stonking cover of Sly & The Family Stone's Everyday People which is so suited to the vibrant Stax backing and the country gospel of Long Walk To D.C..

It is all great stuff, mind, not a duff track on the album. Also worth checking out are Be Altitude: Respect Yourself from 1972 and 1973's Be What You Are, both of which are excellent albums. 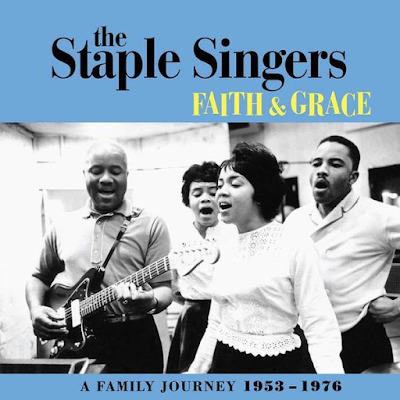 This is an exceptionally good box set covering this iconic gospel/soul vocal group's recording career from 1953-1976. The sound quality is wonderful throughout, even on the older gospel recordings have been remastered to sound as good as they possibly can. Later tracks such as Respect Yourself just come thumping out of your speakers with a huge bassy wallop. The collection clocks in at a whopping eighty-one tracks. Yes, some songs are omitted, but overall it is an extremely comprehensive representation of a remarkable career.

The Staple Singers were so integral to the whole civil rights/soul music link, releasing their inspirational or melodic protest material against a background of social turbulence that, thankfully, led to eventual cultural and social emancipation for African-Americans. 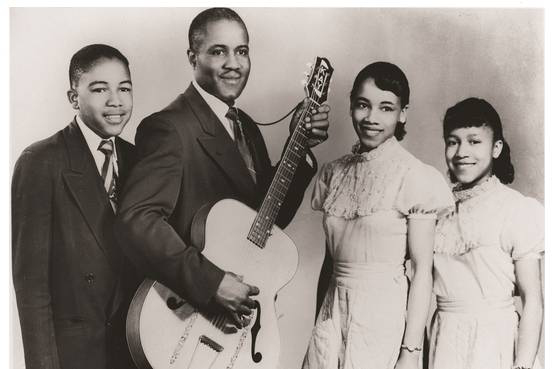 The music is superb throughout, beginning with the family group's uplifting gospel material, such as It Rained Children, If I Could Hear My Mother Pray, Help Me Jesus, the vibrant Hammer And Nails and Swing Low Sweet Chariot. The songs are essentially ones that express a steadfast faith against a background of oppression and prejudice, beautifully and proudly sung. They are sentiments that were continued as the group "crossed-over" to the secular sounds of Stax soul, while still retaining their gospel roots and their vocal harmonies. This produced a whole heap of seriously impressive songs, starting with a great cover of Buffalo Springfield's For What It's Worth and continuing on the iconic tracks such as Respect Yourself, I'll Take You There, If You're Ready (Come Go With Me), the civil rights anthems of Long Walk To D.C. and The Freedom Highway and some excellent Dylan covers in Blowin' In The Wind, A Hard Rain's A-Gonna Fall and Masters Of War. Touch A Hand (Make A Friend) and the addictive  Heavy Makes You Happy (Sha-Na-Boom-Boom) are also wonderful numbers, as is the group's joining with The Band for The Weight at their final Last Waltz concert. 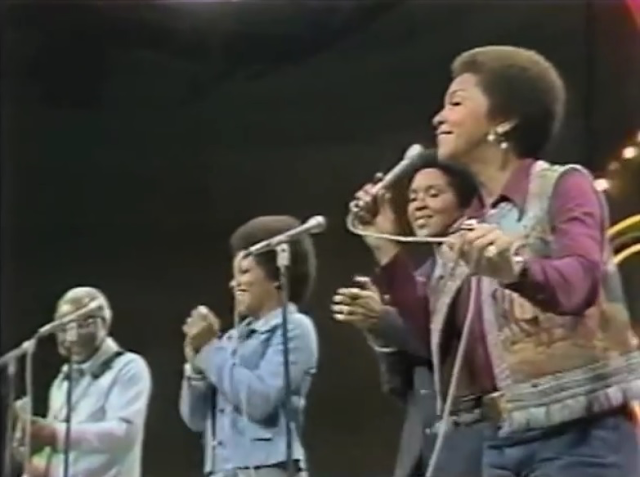 There is also a real bluesiness to some of the songs, such as the captivating Dying Man's Plea and the evocative John Brown and you can hear how gospel material influenced rock 'n' roll on the vivacious harmonies of What Are They Doing (In Heaven Today). The whole box is a veritable cornucopia of influence and innovation. Just check out the sublime bass, percussion and vocals on Let That Liar Alone. Marvellous stuff. You can listen to any of this set, anytime, and I guarantee that it will lift your spirits.

When the most important groups of the twentieth century are being listed, The Staple Singers are rarely mentioned. They should be. Their egalitarian, non-violent message, and the sheer joy their voices brought was matchless and indeed still is. A totally magnificent group. Just check out the Christmas gospel of There Was A Star or the beautiful harmonies of Will The Circle Be Unbroken. There's your proof.