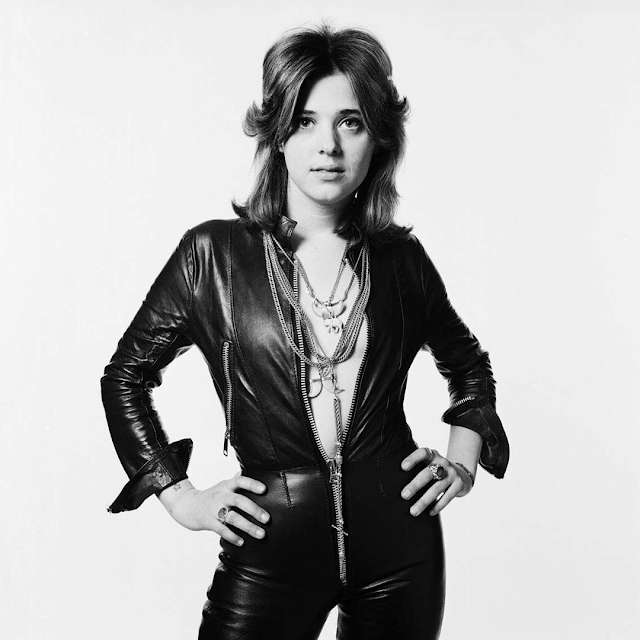 "I made up my mind that I was going to be just like Elvis. It never occurred to me that Elvis was a man. I just wanted to be him. He had a huge impact on me, right down to that black leather jumpsuit he wore on the 68 Comeback Special" - Suzi Quatro 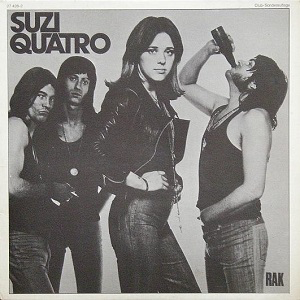 In 1973, it really was unusual to see a woman, yes a woman, fronting a rock band. Yes there had been the wonderful Janis Joplin and "adult rock" artists like Jefferson Airplane's Grace Slick and Curved Air's Sonja Kristina, but Suzi Quatro was a chart act. Until then it simply had not happened. I remember when she first appeared on Top Of The Pops doing Can The Can. She was the talk of the playground the next morning, particularly for teenage boys like myself. "Did you see her?" was the question everyone asked.

Glam rock acts, on the whole, didn't produce albums of much quality. This is different. It didn't contain the single Can The Can (although it did contain the follow-up 48 Crash). The latter kicks off the album in true glam rock drum style. Glycerine Queen is full of T.Rex riffs and a bit of a 48 Crash repeat chorus, but either way this is quite good quality three minute commercial rock. Suzi and her band of (portrayed as) feckless, hard drinking males are on top of the game. The sound quality is excellent too. Wonderfully remastered. 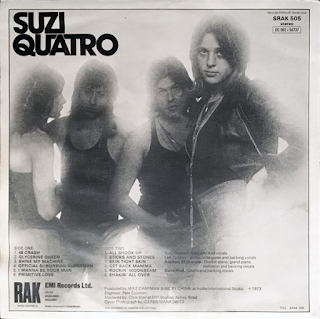 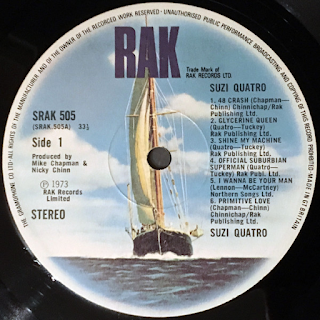 There are a few covers on here. The Stones' I Wanna Be Your Man, Elvis's All Shook Up and Johnny Kidd's Shakin' All Over, but they are handled well and don't detract from the quality of the album. Particularly I Wanna Be Your Man.

** Singles Can The Can and Daytona Demon and their 'B' Sides are included in the bonus tracks. Brain Confusion and Ain't Ya Something Honey are excellent.

Yes, of course this is no masterpiece, but as a more than acceptable example of a glam rock band doing an album, it is surprisingly good. 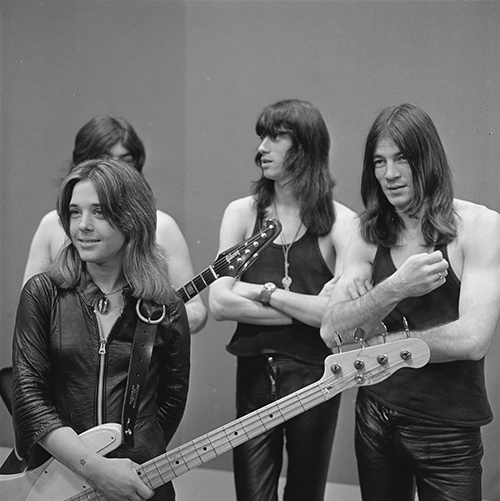 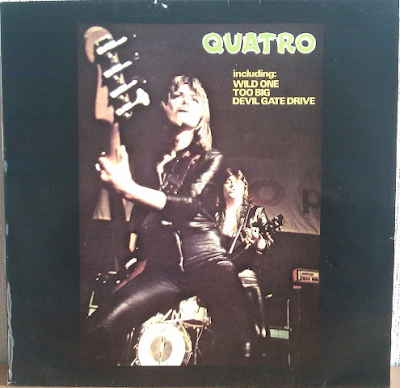 By the end of 1974, glam rock was fizzling out, its fun and sparkle now being replaced by a desire to be "adult", toning down the fun and going all polished, reflective and aiming not just as teens (or pre-teens). Suzi Quatro suffered a lot from this change in prevailing mood and nowhere is this better reflected than on this album. All that Chinn-Chapman drum-powered glam majesty was replaced by several standard rock'n'roll covers and only a few Chinn-Chapman songs. It signalled the beginning of the end of Suzi's all-too-brief flirtation with stardom. Her debut album had actually been excellent, but this one didn't hit the same high spots. It just didn't quite have that album's effervescence.

The opener, The Wild One, while being pretty glammy in its hit single format, it is given a laid-back bluesy, smoky, almost jazzy makeover here, which is ok, but something is lost, to be honest, because the single was great.
Keep A Knockin' is covered with typical Quatro chutzpah, retaining some of that old glam appeal. It has a "live" ad hoc, improvised feel to it, as Suzi sings to a crowd of "boys" and "girls".
Too Big was another Chinn-Chapman hit single, but it was grinding and bluesy, especially in comparison to songs like Can The Can and 48 Crash. Klondyke Kate is a Quatro/Tuckey composition, with a thumping bassy sound and a reasonable dose of the blues. 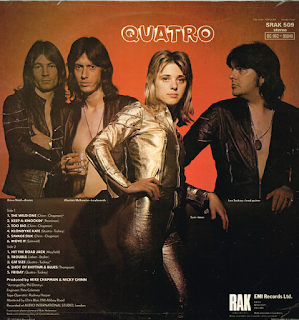 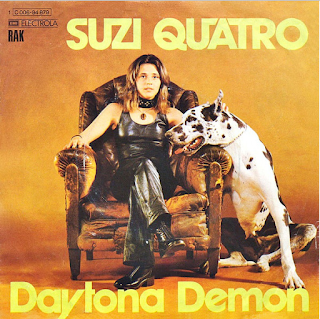 Savage Silk was a Chinn-Chapman non-single that floated around wistfully, before finally breaking out in to their trademark sound. It had echoes of T. Rex's later, failed latter-end glam singles like Truck On Tyke or Light Of Love. Glam in its last throes. Songs like this would have been copper-bottomed hits in 1972 or 1973. In late 1974, no chance.
Suzi could handle covers in her sleep, and a rocking Move It, a funk-rock-ish Hit The Road Jack and a muscular, barroom-style Trouble are all given the necessary treatment. I enjoy them all, but they hardly display any real progression.

Cat Size is a Quatro/Tucker number and is a solid, convincing rock ballad with a great vocal from Suzi. A Honky Tonk Women riff introduces a cover of A Shot Of Rhythm And Blues.
Friday is a chunky, solid bluesy rocker to end on, with some infectious bass, barroom piano and impressive riffy guitar. It also has some risqué lyrics about promiscuity, unusual for the time.

** The iconic glam single, Devil Gate Drive, was not on the original album, but is on this re-release. It pre-dated the album by eight months. 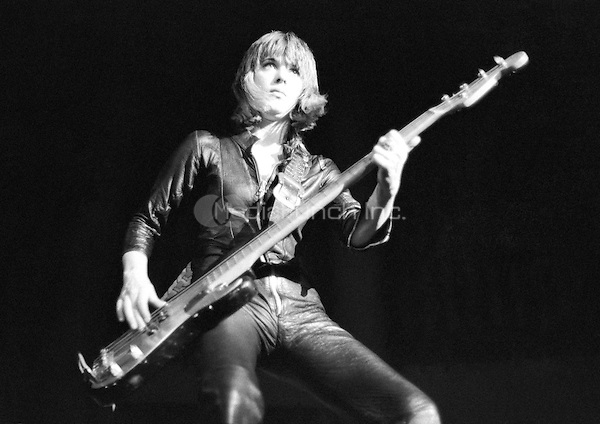 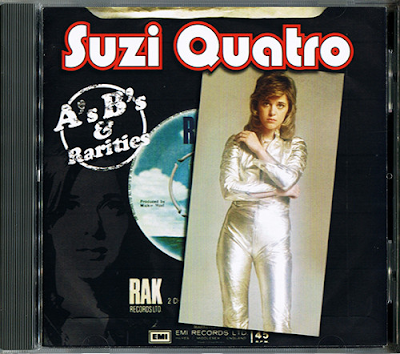 In 1973, it really was unusual to see a woman, yes a woman, fronting a rock band. Yes there had been the wonderful Janis Joplin and "adult rock" or proggy artists like Jefferson Airplane's Grace Slick and Curved Air's Sonja Kristina, but Suzi Quatro was a chart act. Until then it simply had not happened. I remember when she first appeared on Top Of The Pops doing Can The Can. She was the talk of the playground the next morning, particularly for teenage boys like myself. "Did you see her?" was the question everyone asked.

This is an excellent compilation in the impressive RAK series (Hot Chocolate, Mud and CCS are others). It chronologically includes all the singles and the 'b' sides, plus a few rarities thrown in. The sound quality, as on all of them, is truly superb.

Suzi Quatro, leather-clad, with a tough-girl image, and backed by three heavy-set blokes had a totally unique image for the time and she put out, with the help of writers Nicky Chinn and Mike Chapman, some excellent, rousing, glam rock singles. The songs were all based around a big, glam rock drum sound and lots of infectious guitar riffs and Suzi's strong rock voice. The great hit highlights are all here - the lyrically perplexing, nonsensical Can The Can; the equally bizarre but catchy 48 Crash;  the singalong glam of Daytona Demon with its typically glam drum backing and the now iconic huge number one, rollicking barroom fun of Devil Gate Drive.
Too Big and The Wild One are not quite so "glam", coming from 1974-75 when Chinn/Chapman decided to go more "adult" in their songwriting. They are both enjoyable and still singalong, but they don't have that drum-fuelled, goofy glam joie de vivre of the earlier singles.

Similarly, Your Mamma Won't Like Me, her last hit from the glam age has Suzi going all smouldering and sexy, telling of how much she enjoys making love. As a teenage boy at the time, I loved hearing her admit to this.

An early song such as Rolling Stone is an AOR-style pleasant enough rock number, but it certainly hadn't caught on to the glam thing as yet. Neither had the bluesy rock of Brain Confusion.
Ain't Got No Home has Suzi channelling her inner Elvis as she often did. The 'b' sides are actually ok, much better than Mud's comparative self-penned (i.e. not Chinn-Chapman) offerings. Ain't Ya Something Honey is a barroom style bluesy rocker. "You're looking prettier than me, what the hell you tryin' to be.." is a nice tongue-in-cheek line from Suzi.

Little Bitch Blue is a muscular, thumping, solid rocker. It is clear that the "glam" songs of Chinn-Chapman were considered the singles material, money-makers, yet these tracks seem to be her bread and butter, the ones she preferred doing, showing that she could credibly rock.
Tear Me Apart is one hell of a T. Rex Get It On rip-off, though. Strangely, the collection ends with two completely incongruous songs - the Spector-esque Kids Of Tragedy and, would you believe a nine-minute soft rock number, Angel Flight, complete with a drum solo and some orchestrated prog-rock stylings. Both the songs are actually quite enjoyable, as it happens. 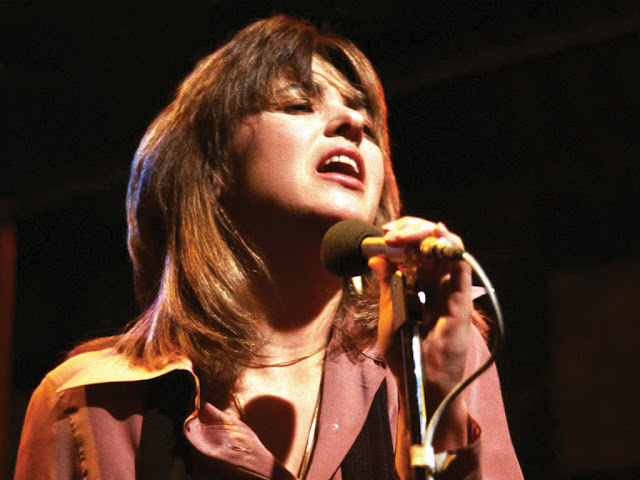 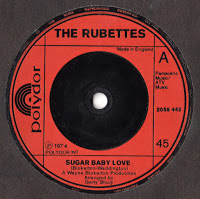