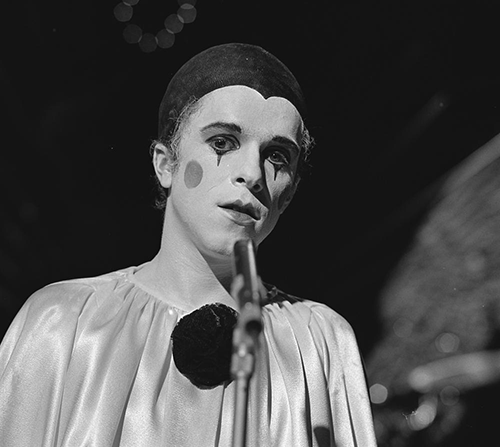 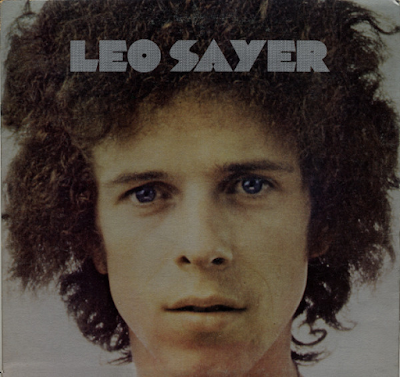 Leo Sayer sprung from nowhere in late 1973 with this album and the accompanying hit single The Show Must Go On (which saw Sayer on Top Of The Pops in full Pierrot clown get-up). He was the lyricist and singer for composer David Courtney's melodies and the album was produced by Adam Faith. The songwriting duo also provided material for The Who's Roger Daltrey's solo Daltrey album. Sayer was seemingly trying to get in on the Elton John singer/songwriter thing while at the same time having a bit of David Bowie/Steve Harley quirkiness with his initial costumed image. The innovativeness didn't last too long, though, and Sayer ended up in the mainstream within a few years, scoring a huge number one with the standard ballad When I Need You. However, this offering was a decidedly unusual debut.

The opener, Innocent Bystander, has many echoes of Elton John's early seventies output with is strong piano backing. That mood is continued into Goodnight Old Friend, with its big string orchestration, such as appeared on the "Elton John" album. Sayer provides a theatrical, stagey vocal. It really is a very difficult album to categorise, however.
Drop Back has more of that Elton feel, it has to be said, probably more so than on the previous two tracks. It also has some muscular rock parts in it too, as well as the plaintive vocal/piano bits.
Silverbird is a brief musical interlude before the album's tour de force, the unique The Show Must Go On, complete on the album with extra circus intro that didn't appear on the single. The song sounds like something a one man band may have played, with its thumping bass drum sound during the verses. Sayer launches into some madcap "scat" vocals at one point too. A most quirky track. 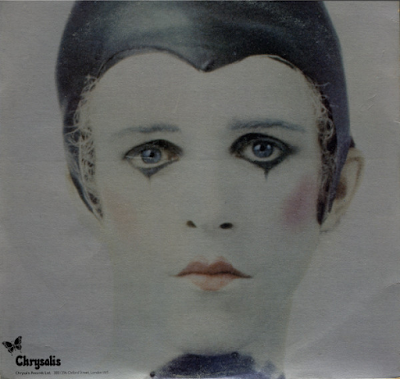 The Dancer exemplifies the word "plaintive". It is an evocative voice and piano/strings ballad.
Tomorrow is the album's most powerful, rock track, with thumping drums and chunky guitar riffs. It is probably my favourite cut on the album.
Don't Say It's Over is a beautiful, haunting rock ballad that bursts into life half way through with some solid rock backing.
Slow Motion is a short piano and vocal, Elton John-style number, with Sayer's voice even displaying an John-esque twang.
Oh Wot A Life is a growling rocker, full of vibrancy and vocal ebullience. Sayer's first, non-hit, single closes the album, Why Is Everybody Going Home, another atmospheric but stately and quiet number that made a strange choice for a single. It is a nice track though and this certainly is a most interesting album, but I have to admit it is very much of its time. 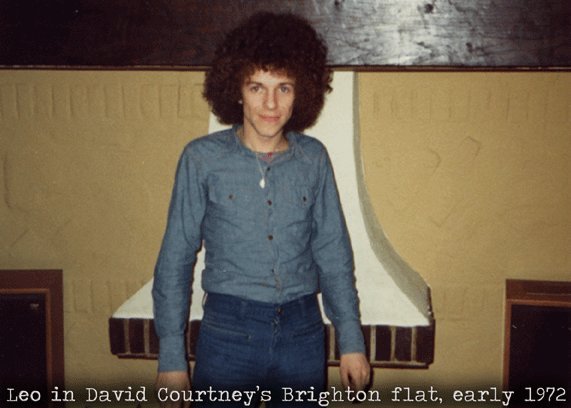 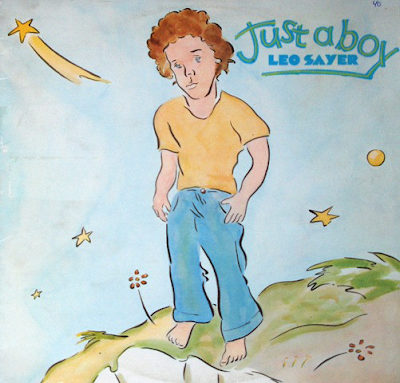 After the quirky debut album, Silverbird, Leo Sayer and musical collaborator David Courtney out out another album in the same sort of vein. The songs are oddly appealing, difficult to categorise, still bearing that early Elton John influence, but striving for a touch of unique personality. The clown's outfit Sayer donned for the first album was now gone (almost, he still toured in it in 1974, see bottom picture), but he still put himself forward as a showman, a kind of sometimes sad, reflective but always energetic Vaudevillian. This is shown in the album's rear cover which shows Sayer laughing at his previous image, while the front cover is Cat Stevens-esque in its mournful-looking drawing of Sayer looking sad and lonely.

Telepath is a grandiose, operatic-style number with an odd shaking vocal and a big production and more of the Elton John echoes that were so prevalent on the debut album.
Train starts plaintively before launching into a solidly rocking beat with some New Orleans jazzy-style brass.
Bells Of St. Mary's is an emotive ballad about a musician. There is no doubt that Sayer wrote some atmosphere, touching songs. This is very much Leo Sayer at his best, before he became a mainstream chart act in 1977. 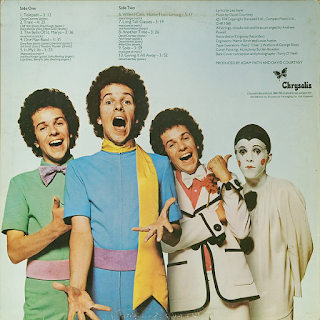 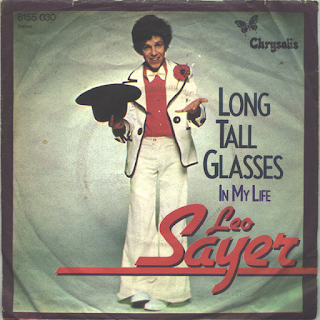 In My Life is an impressive, powerful and typically mid-seventies rock ballad. It has a big bass piano and drum sound and a strong, confident vocal from Sayer. There is always and underlying sadness to Sayer's material at this point in his career and When I Come Home This Morning is a beautiful, heartbreaking ballad, full of emotion and expressive vocals.

As I said earlier, there was also the inveterate showman in Sayer too, and this is exemplified in the album's other hit single, the incredibly catchy and individual fun of Long Tall Glasses.
Another Time is a big production, dramatic ballad, again the mournful mode, this time about Sayer's lonely life on the road. The same subject is covered in the big, brassy theatrical punch of Solo. The album ends with the afore-mentioned Giving It All Away, a plaintive, once again moving piano-driven ballad.

This was another highly credible album from Leo Sayer and deserves more attention than to dismiss it as the work of the When I Need You chart artist. It is far better than that and is recommended. 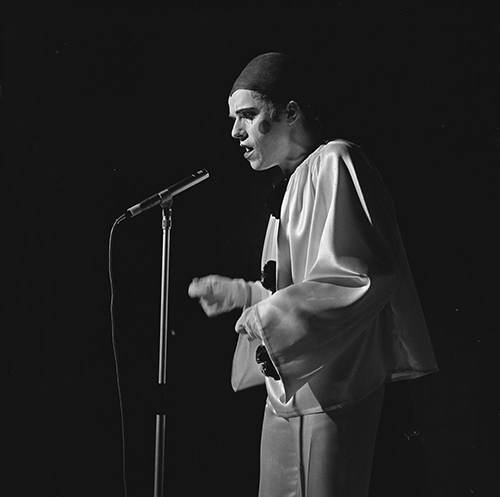 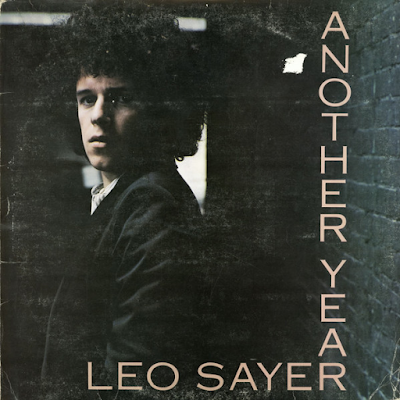 This was the third, and last, of Leo Sayer's "credible" singer/songwriter albums, before he went to L.A. and started recording mainstream ballad/commercial disco material. While the latter was certainly more successful for Sayer, and made him a household name, it was these first three albums that contained some really good songs and are far more worthy of several listens. This album concentrated on the sad, often lonely lives of some of the British urban population. This was also the last of Sayer's "sad" albums, full of mournful songs about the lost, isolated and heartbroken. In some places he seems to get nostalgic, anticipating how things may end for his career. His upcoming move into the chart pop mainstream seemingly came at just the right time.

Bedsitterland is a solemn, plaintive, piano-driven number upon which to open the album. As with many of Sayer's songs from the period, it is very Elton John-esque. When it ups the pace in the middle, (the percussion and bass backing is crystal clear), and it just sounds so Elton-ish then. There is a jazzy feel to it in places, with echoes of Billy Joel too. I remember hearing this song at time, and, as a teenager, I didn't know what a "bedsitter" was. Listening to it now, it is certainly up there with the best of Elton John or Billy Joel at the time.
Unlucky In Love is a typical mid-seventies rock ballad, with Sayer's voice strong and emotive over the powerful backing. The Last Gig Of Johnny B. Goode is an atmospheric, Billy Joel-style tale of a faded old pop star's final gig.
The Old Dirt Road had Sayer returning to his Vaudevillian, showman roots that dominated his debut album. He always liked a bit of this sort of thing. 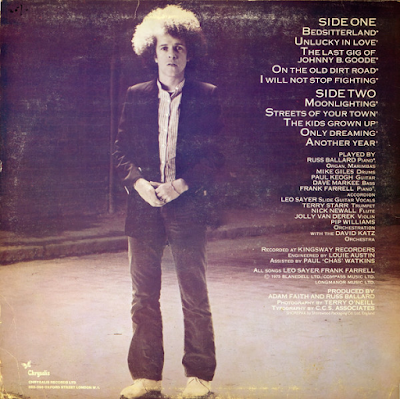 I Will Not Stop Fighting has a feel of Simon & Garfunkel's Bridge Over Troubled Water at the beginning. It is a stark, piano-backed solemn ballad.
Moonlighting was the album's big hit single, and deservedly so. It is a captivating "story song" about a couple eloping to marry in Gretna Green. Sayer sang "we're only ten miles to GretnaTH and three hundred behind", for some reason, though.
Streets Of Your Town evokes Ralph McTell's Streets of London in a haunting song about the lost and the lonely existing on the streets.
The Kid's Grown Up has Sayer looking back at his own development into a big time pop star who travels in a limousine. It has hints of The Who in places, or certainly Roger Daltrey in the vocal.

Only Dreaming is a bit folk-rock-ish in its gentle acoustic and bass intro before Sayer's growling vocal ramps it up considerably. It ends with some sweeping big string orchestration.
Another Year sees in 1975 and then 1976 with a sombre, piano ballad. This was certainly Sayer's last album in this vein. It used to be my favourite of his albums back in 1975-76, but listening to them all again, I actually prefer the first two.

** The non-album single, a cover of The Beatles' Let It Be provided a marker as to the direction that Sayer's music would subsequently take. 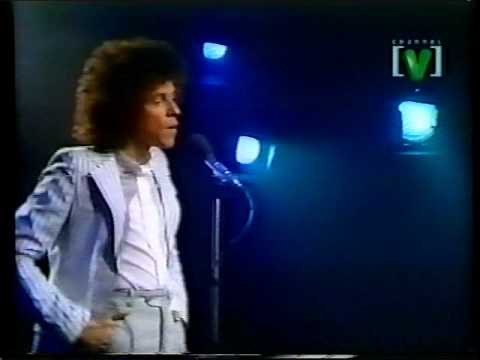 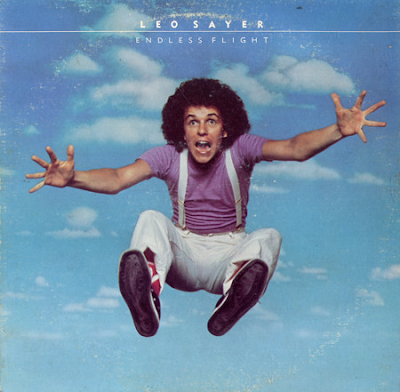 This was Leo Sayer's fourth album, and the one where he definitely abandoned the original singer-songwriter image that prevailed on his first three albums and he went mainstream, recording in the USA, collaborating with Barry Mann and Cynthia Weill on some songs, Vini (Ringo Starr's songwriting partner) Poncia on others and singing Carole Bayer Sager and Andrew Gold numbers too. The album was also exploiting the easy listening/disco market as opposed recording plaintive/bedsitter appeal songs. The cover still portrayed Sayer as a slightly crazy, quirky, clown-like figure, something he could never really shake off. Maybe he didn't want to.

The punchy disco-ish feel is felt from the outset with a sort of Stax meets upbeat Van Morrison number in Hold On To Your Love, with its infectious brass backing and confident Sayer vocal. This is as rocking as he had been this far.
One of the albums two big hits was the catchy disco hit You Make Me Feel Like Dancing, which utilised the falsetto vocal a year before The Bee Gees did a similar thing to great effect. A cover of Diana Ross & The Supremes' Reflections follows, delivered in a muscular, horn-driven way. It is enjoyable enough, though not a patch on the original. 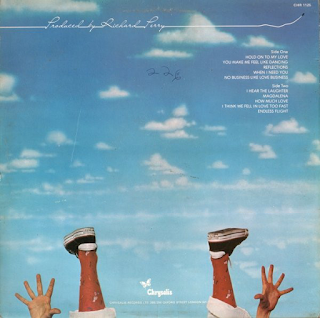 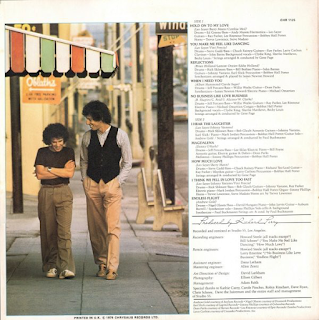 The huge, easy listening number one single was Albert Hammond/Carole Bayer Sager's When I Need You, which for all its schmaltziness, is a classic pop ballad. It also contains a killer saxophone solo too.
No Business Like Love Business is a blatant Van Morrison-style lively song that sounds like it comes from His Band And The Street Choir in many ways.
I Hear The Laughter is a light, poppy number, that sounds sort of Cliff Richard-ish.

Magdalena is an early Elton John meets Al Stewart gentle, laid-back song, while the third single from the album, How Much Love, has a thumping, Motown-influenced beat and a strong vocal. It has a bit of a Four Tops feel, for me.
I Think We Fell In Love Too Fast also has echoes of Elton John. Andrew Gold's Endless Flight is an evocative, grandiose, piano-driven ballad to end the album which employs Elton John's string producer Paul Buckmaster and drummer Nigel Olsson and you can't half tell. It is a really good track.

Although a lot of the raw appeal of Sayer's early albums was lost on this album, it was definitely his most polished in both its instrumentation and sound quality. It is a pleasant Sunday afternoon's listen in its unthreatening way. It never got better than this for Leo Sayer, though. This was his commercial and artistic high point. 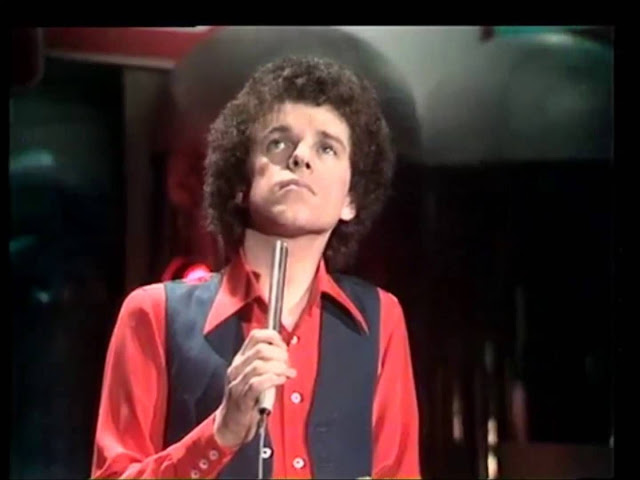 Check out Roger Daltrey's debut solo album which has those afore-mentioned Sayer songs on it :- 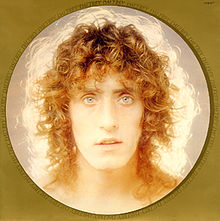