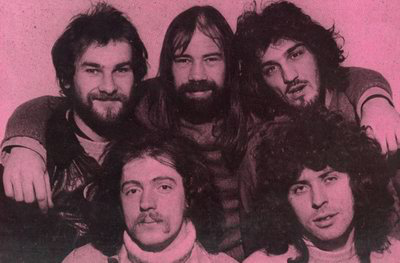 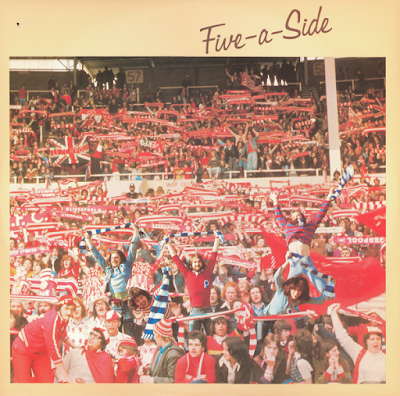 Ace had a reputation as being a "pub rock" band, which was true to an extent, in that they had that average blokes from the pub image (compared to the peacock finery of the glam rock artists all around them). Musically, however, they were a bit difficult to pin down. They certainly weren't pub-style heads-down full-on bluesy r'n'b. They were also often pigeonholed as "blue-eyed soul", largely because of their superb, soulful only chart hit in How Long, and singer Paul Carrack's "white soul" voice.  The rest of the album isn't really like that track, though, ploughing more of a rocky, piano-driven Americana-influenced slightly bluesy rock style that was actually somewhat unique and certainly didn't fit into the country rock genre that was so popular among other "serious" bands at the time. Anyway, this was their debut album and probably the best of the three they put out.

Sniffin' About is a lively, rocking opener with a bit of a hint of The Eagles here and there and The Doobie Brothers too. For me, there is some Steely Dan floating around as well, airs of My Old School in places. It certainly builds the feeling that this is far more of a rock album than a soul one.
Rock 'n' Roll Runaway has some driving piano and country style slide guitar contributing to an upbeat number. It comes to a somewhat abrupt end, rather as if it were a studio alternative take, which is a shame. 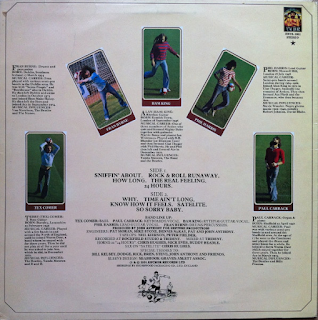 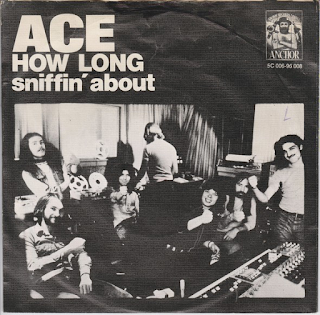 How Long is a classic seventies single, with superb atmosphere, hooks and bass line. The Real Feeling is a mid-pace boogie-ish rocking number, which again suffers from a sudden ending, before its time.

24 Hours is a deep, bassy, almost funky workout, featuring some excellent organ and saxophone, and Why attempts to re-create How Long to an extent, although it is far more rocking, with a killer guitar solo. It is an excellent track. Perfect laid-back soulful rock. It is all very "adult", particularly in comparison to the contemporary output from artists like David Bowie, Mott The Hoople, Roxy Music who were far more ebullient and chart-orientated in their approach than this brand of thoughtful rock.
Time Ain't Long is a grinding, bluesy rock groove with a bit of an Allman Brothers feel for me, just here and there. A sort of Southern states feel.

Know How It Feels is a mournful, somewhat under-cooked, unremarkable slow ballad. The vocal is a little muffled and undercooked. Satellite, however, is a jaunty, piano-powered number that sounds like something Bruce Hornsby may put on Harbor Lights with its rolling piano riff. There is nice swirling saxophone on here too.
So Sorry Baby ends the album on a solid muscular note with an organ-driven rocking, riffy track. Overall, this a highly credible, listenable album that would have appealed more in America in 1974 than in the UK. It is worth a listen, but it is nothing ground-breaking. 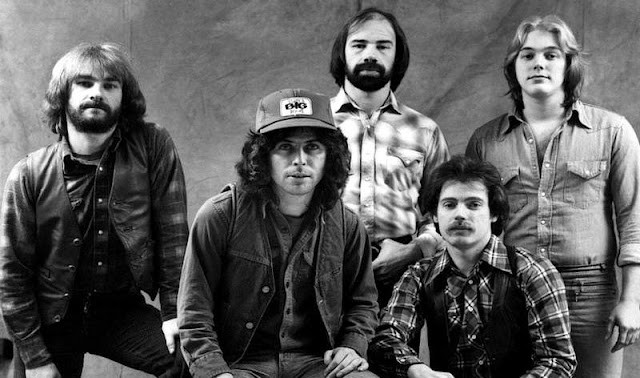 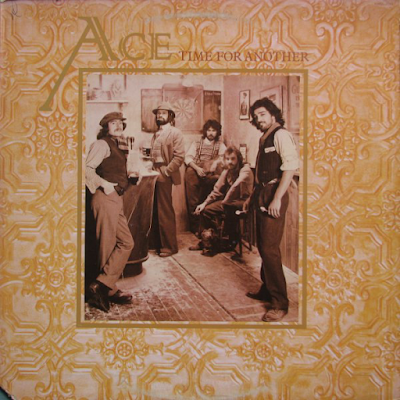 For me, this, Ace's second album, is a very US-sounding offering, full of country rock vibes, Eagles/America influence and just a general feel of Americana. It is an easier album to categorise than the previous year's debut and, while that album had a more raw soulful rock feel to it, this one is certainly a pleasurable listen. Listening to this, one would be pretty convinced that Ace were a US group as opposed to a UK one.

I Think It's Gonna Last is an Eagles-esque US-sounding rocker and the appealing I'm A Man gives us more Americana, in its upbeat, guitar-picking country rock sound.
Tongue Tied is a melodic, laid-back AOR rock ballad. Its features Eagles meets The Doobie Brothers-style vocals and, again, sounds very much a US easy listening song. Lovely bass line underpinning it too and some excellent guitar.
Does It Hurt You is a solidly country rock tune, full of America (the group)-influenced harmonies and a gentle steel guitar backing. 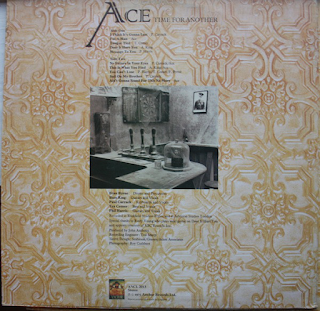 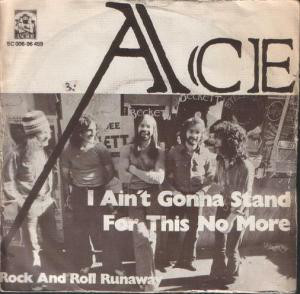 Message To You is a a number that evokes the group's big hit How Long more than anything else on the album thus far, but it still has some convincing Doobie Brothers guitar/vocal interplay making it far more of a US-sounding track than its predecessor.
No Future In Your Eyes is a deliciously laid-back slow number with CSNY vocals and a softly funky guitar backing. It is a bit reminiscent of Eric Clapton's material from this period.
This Is What You Find continues the sleepy, unthreatening, laid-back ambience. Ace were able to get away with this sort of (admittedly very pleasant) material in 1975. Give it a year or so, however, and it would become culturally irrelevant. The track features some sublime guitar/bass passages, however.

You Can't Lose is slightly more upbeat, albeit in a very Eric Clapton sort of way. More understated funk backs the track and the vocals are very Doobie Brothers. Nice wah-wah solo in the middle as well.
Sail On My Brother sounds a bit like a Free rock ballad in both its sound, vocal delivery and its title. Not quite as muscular as Free, though, more like Fleetwood Mac.
Ain't Gonna Stand For This No More is a slice of funky blues to finish off another enjoyable but not essential album. 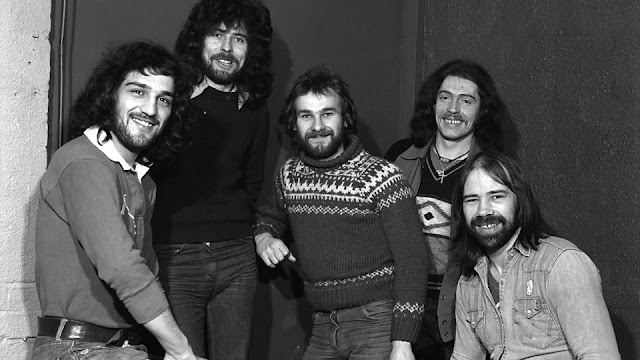 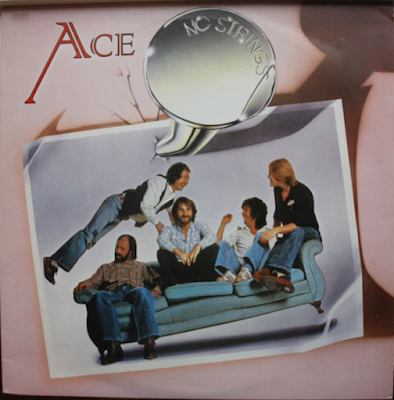 This was Ace's final album. By now, punk was pumping its fists all around and a laid-back album of AOR rock/soul was simple not culturally relevant anymore. It is perfectly listenable, taken out of context, but it is not as good as the group's other two offerings. It is very much a harmless slice of Southern Californian-influenced AOR. Completely inessential, it has to be said. Personally, I never felt Ace were particularly a "pub rock" band, but either way, many groups who were in 1974-76 were now veering strongly towards punk. Ace did the opposite and went full-on West Coast USA. A strange choice for a UK band in 1977. It was to be their final choice.

Rock 'n' Roll Singer is a rollicking piano and brass Chicago-esque opener, while You're All I Need sort of taps into that now quite long gone feel of How Long but with some very end of the seventies, easy listening vocals and some Santana-style guitar. 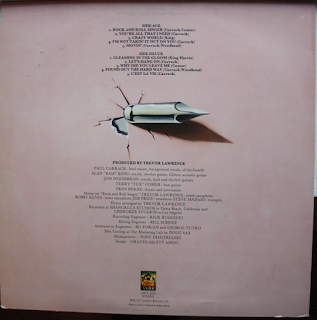 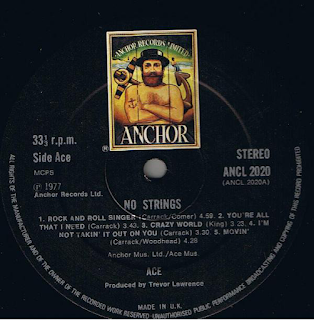 Crazy World has a Doobie Brothers riff and some soulful, Boz Scaggs-inspired vocals. I'm Not Takin' It Out On You continues in the same Doobies/Eagles/later Tower Of Power albums vein. Like the previous album, much of the album's material is very US freeway/radio-friendly in feel, nothing like the UK in 1977 at all and, as another estimable reviewer has pointed out, the 1974 glory days of "pub soul" with How Long now seem a very long time ago.

Movin' has lyrics full of Americana-derived images with lyrics about "taking the coastal highway". Tracks like this are perfectly inoffensive but they seriously are nothing special.
Gleaming In The Gloom reminds me of Traffic's mid-seventies output. It also has hints of Ace's best 1974 work, particularly in the guitar solo mid-song. Let's Hang On again ploughs that 1974 furrow but with a bit of a Jackson Browne-sounding vocal from Paul Carrack.

Why Did You Leave Me? is a pretty ordinary mid-pace rock ballad. Some nice guitar floating around on it though. The chorus is uninspiring, it has to be said.
Found Out The Hard Way is a lively rocker once again featuring some impressive riffy guitar. It is one of the album's better cuts, for me.
C'est La Vie is a sad-sounding number to end Ace's three year, three album recording career. All three of their albums were eminently listenable, but they never really made it, which was a bit of a shame, but listening to the albums, you can sort of hear why.