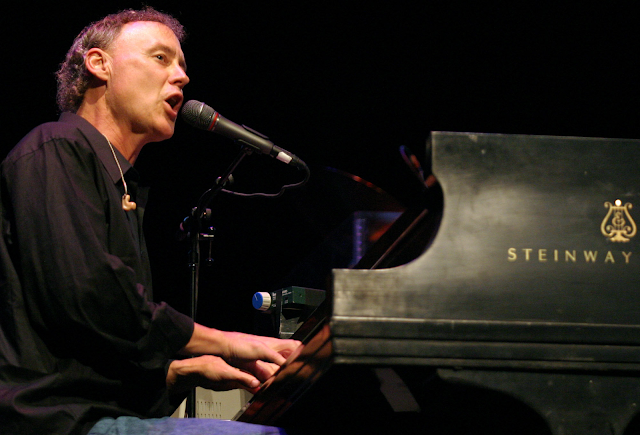 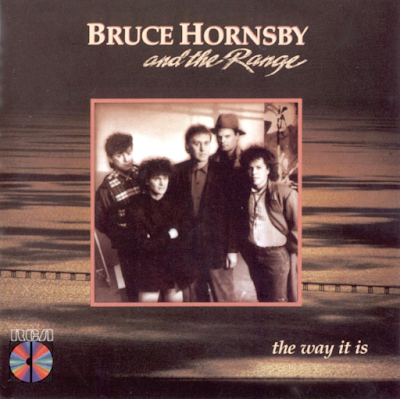 Simply a lovely debut album from Bruce Hornsby & The Range. Released in 1986, I love this album dearly. Even if I don't listen to it all the time these days, every time I give it a whirl, it cannot help but lift the spirits - Hornsby's instantly recognisable, melodious piano, his yearning vocals and his often inspiring, evocative, emotional and pertinent lyrics are all ingredients to what is a fine piece of work.

The songs
From the opener On The Western Skyline, the violin and guitars start it off, then Hornsby's piano kicks in and we are treated to some classic Hornsby bitter-sweet romance.
The Long Race is packed full of images of the Virginia coast, the towns and the watermen who work it. This is a continuing theme in many of Hornsby's songs, the area he grew up in and the men who worked there. Even references such as “the Admiral’s daughter” are derived from Virginia’s naval presence.

Every Little Kiss is an upbeat radio friendly romantic number and Mandolin Rain is a copper-bottomed Hornsby classic, full of wonderful piano and a moving vocal delivery of lyrics packed with pathos. Hornsby's yearning voice can give a celebratory song a sadness. 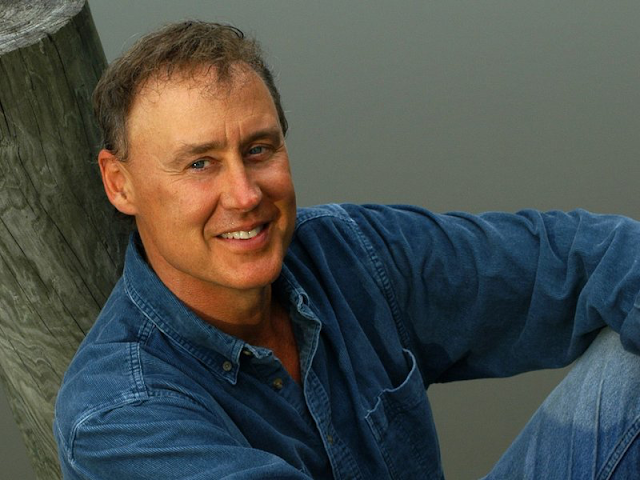 Then there is The Way It Is, in many ways the song that made Bruce Hornsby, the trademark piano riff used again and again to provide the soundtrack for TV features even sports highlights and so on.
Down The Road Tonight is a great, rocking song about a roadside whorehouse! It has that great verse - "There's a place, a little roadside shack, a poor man's Paris, with parking in the back...". An absolute killer guitar riff too. One of my favourite songs of all time.

The Wild Frontier is another more rock influenced song, with some slightly funky guitar and wild violin break, while The River Runs Low is a beautiful, piano-driven ballad. The album ends with The Red Plains which manages to combine a tender slow number with some tough rock passages and a "na na na" chorus part to boot.

All in all, this was an excellent debut album from a most underrated band. 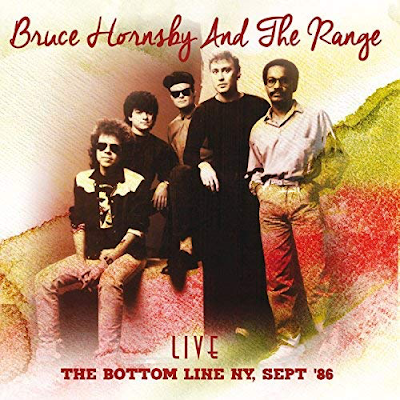 This is a rare Bruce Hornsby live album. It is one of those "official" bootleg releases take from radio broadcasts and now made available for release. For me, the sound is slightly superior to most bootlegs, no doubt because it is sourced from the radio broadcast. Personally, I find it perfectly listenable.

Hornsby and the band are on top form, and they play the whole of the The Way It Is album, plus Jacob's Ladder and Till The Dreaming's Done from the forthcoming Scenes From The Southside album. There is also the previously unreleased I Know You Rider (which does suffer a brief sound dropout). Personal favourites are Mandolin Rain, Every Little Kiss and the rocking closer, Down The Road Tonight.

Look, if you are an "audiophile" you will find things to gripe about regarding the sound. If, like me, you are just happy to hear some Hornsby live material from this period then you will enjoy this. I saw them live in 1988 and they were great, so it brings back good memories. 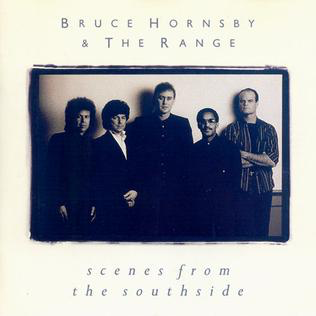 There are some albums for which, however many years pass since their recording, always remain close to my heart. This is one of them. Despite being in dire need of a remastering, having a bit of a bright, tinny, late eighties sound, it is simply a wonderful collection of melodic, piano-driven, emotive songs.

Bruce Hornsby’s lyrics are perceptive, moving, worldly-wise, mournful and yet uplifting all at the same time. His ear for a catchy tune is superb and his piano-playing is unique and instantly recognisable. I read someone compare it at times to Rachmaninov. I wouldn’t know but it certainly is integral to the perfect soundscape of this album.

The songs
The opener, the environmentally-conscious anthem of Look Out Any Window gets the album off to a vibrant start, Hornsby’s insistent piano driving on his accomplished rant against chemical pollution in search of profit. This is just a rock song, but its arrangements are unusually grandiose which lends huge impact the song.
The Valley Road is an upbeat, tuneful singalong number that covers up a dark tale of an unwanted pregnancy - “everybody said she’s gone to her sister’s, we all knew what they were talking about...”. Hornsby has the ability to dress a serious subject up in the most beautiful of melodies. 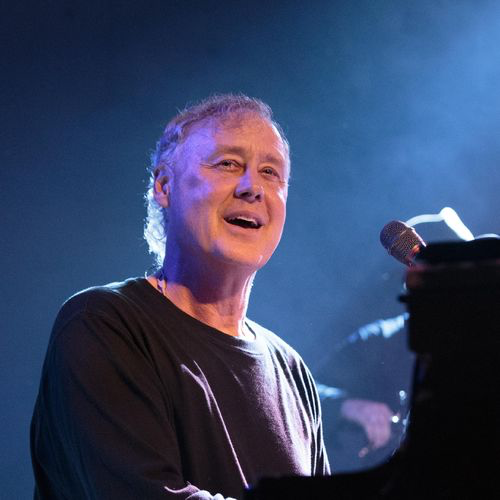 I Will Walk With You opens with the most delicious piece of piano before Hornsby’s sad, yearning, evocative voice comes in. It just moves me so much. Beautiful. Lovely lyrics and delivery. Just perfect.
The two mighty cornerstones of this album come next - the image-packed, often bleak but inspiring The Road Not Taken with its lyrics about falling in love with an Appalachian girl and the sumptuous The Show Goes On. The former has some simply majestic piano passages and a gorgeous hook. A gentle accordion sounds in the background like a mountain breeze at times. The piano passage in the middle break is almost classical. The song is heartbreaking but inspirational at the same time. Few songwriters have this ability. Hornsby does, as does Mary Chapin Carpenter. The Show Goes On is a lovely, romantic (yet at times sad) song, with yet another exhilaratingly catchy hook. The piano introduction is again truly magnificent as is the beautiful bit in the middle. It is so hard not to go over the top and wax lyrical about songs like this. It is just wonderful. I can’t help myself.

A few comparative rockers are also in Hornsby’s canon here - the nostalgic The Old Playground where he vaguely remembers his childhood amongst wiser, older emotions; the blues-harmonica enhanced Defenders Of The Flag - a song whose meaning I have never been quite sure, but it comes across as a wryly cynical one. Jacob's Ladder is a corker, a full on potent rock song with a great opening line - “I met a fan dancer in downtown Birmingham..”.

Just when you think that is that for wistful, poignant love songs we are treated to the treasure that is When The Dreaming's Done. Some Parisian-style accordion drives this entrancing song along. For anyone who is or has been head over heels in love with someone this is for you. One of my favourite songs of all time from one of my favourite albums of all time. 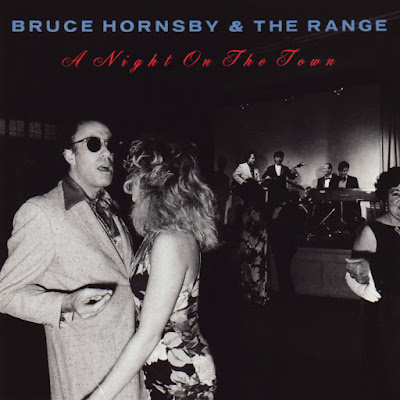 This was the third and final album accredited to Bruce Hornsby & The Range and it has always been one that has never quite done it for me, despite a few high points. Hornsby's trademark piano licks are noticeably thinner on the ground, as are the killer melodies and it is a far more rock-powered album, which was a bit of a shame in comparison with its two predecessors. Hornsby was always a great lyricist, though, and his skill is still apparent on many of the songs here.

It is also long overdue a remastering, as its sound is still a bit tinny. A sonic makeover would improve the album considerably.

A Night On The Town is a solid, chunky opener, with a firm bass sound and an insistent, grinding melody. Hornsby's evocative voice is instantly recognisable. Carry The Water utilises that most eighties-nineties thing - the accursed programmed drum sound. When you have a drummer as competent as John Molo, why not just have "proper" drums?  Whatever, it is still a reasonable track, with a great hook and a welcome typical piano solo.

Fire On The Cross is a hard-hitting song about the Ku Klux Klan, backed by an appealing country-style mandolin.

By far my favourite track on the album is the moving Barren Ground, a slow number delivered in Hornsby's pathos-evoking voice as he tells us how good seeds don't grow on barren ground. Bruce Springsteen wrote great hard times songs in this mould and, at times, Hornsby is right up there with him. I love this song dearly and have done for thirty years. Shawn Colvin provides excellent backing vocals, by the way.

The lively Across The River is another top notch track, unfortunately blighted by dodgy sound in places, but not enough to detract from its appeal. although Stranded On Easy Street has a typically eighties-nineties synth riff, it is a mightily enjoyable song.

Another Day is a rollicking piano-driven rocker and the riffy, slightly swampy Special Night rocks more than I recall from when I first heard the album. I have rediscovered a liking for the track. There is some great guitar and piano interplay near the end. These Arms Of Mine is more dignified and soulful. I hope I have reassessed this album positively, although I still have slight problems with the sound. 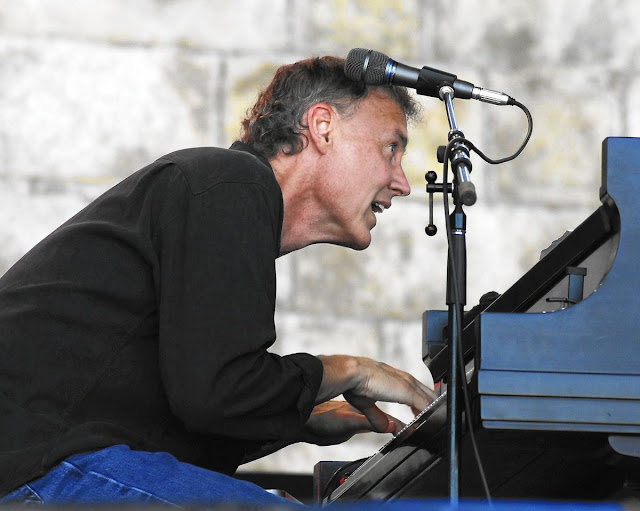 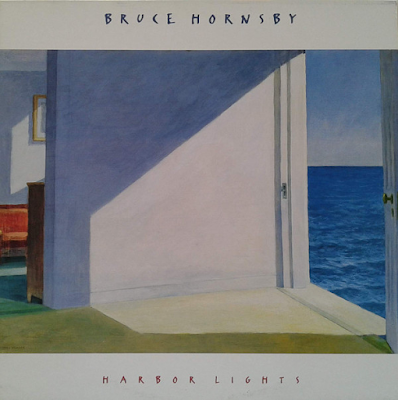 This was Bruce Hornsby's first "solo" recording, without The Range, although long-time drummer John Molo was still with him. It is still full of piano-driven, melodious AOR-style rock, with sensitive, observant lyrics, although this album has far more jazzy tinges than previous offerings.

The songs
Harbor Lights, the opener, is an extended mid-tempo rock number with some excellent jazzy guitar improvisation near the end and killer piano too, as is to be expected.
Talk Of The Town has some infectious jazz piano and an almost funky backbeat. It has some wry lyrics about small town gossip. Most tracks end with considerable "jamming"-stye instrumentation. This was a deliberate move on Hornsby's part. Hornsby likes to cut his musical chops, but it blends well with the lyrical content - lots of tales of regular American life and love. The musicianship is wonderful from all concerned but it always is matched by the story each song tells. Hornsby never shows off musically, he just loves to play and this albums exemplifies that perfectly. Check out the piano, bass and drums at the end of Talk Of The Town for proof. 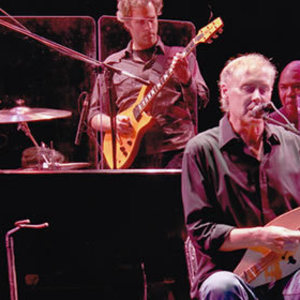 Long Tall Cool One is a Steely Dan-esque melodious number about a mysterious character. The saxophone in the background, from the instantly recognisable Branford Marsalis, is intoxicating.
China Doll is another funky shuffler that breaks out into a catchy, jazzy chorus. Some superb piano features on this one too.
Fields Of Grey is simply gorgeous, summoning up the feel of The Drifters in many ways in its backing vocal harmonies. It is also very redolent of Hornsby's work with The Range, it has a great hook to it. Lovely bass line as well.

Rainbow's Cadillac is incredibly catchy with another piano-drive jazzy refrain. Great stuff. Probably the best cut on the album.
Passing Through is another infectious, appealing number with some excellent wah-wah guitar. The Tide Will Rise is a Range-style number about the Virginia water shore, referencing "the Admiral's daughter" (from Every Little Kiss) once more. I guess it rhymes so well with "water". It is a lovely, sweeping, atmospheric song.

What A Time is just sumptuous, featuring some top notch piano from Hornsby. Another great track. Pastures Of Plenty is a more sombre, slow tempo rock number, with some great guitar breaks, to end what is a very enjoyable, moving and uplifting album. Highly recommended.