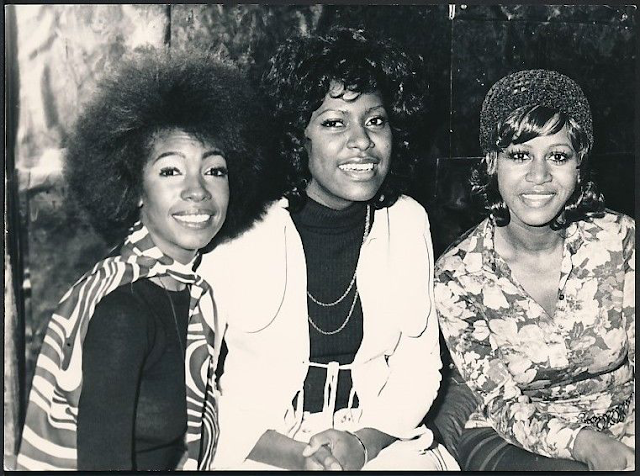 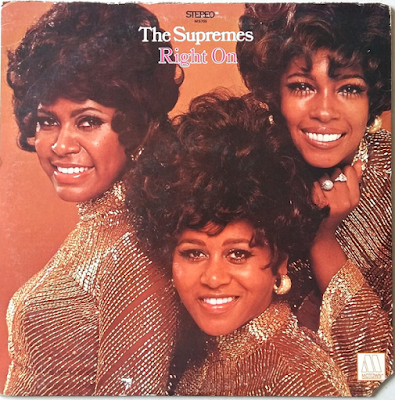 Up The Ladder To The Roof/Then We Can Try Again/Everybody's Got The Right To Love/Wait A Minute Before You Leave Me/You Move Me/But I Love You More/I Got Hurt (Trying To Be The Only Girl In Your Life)/Baby Baby/Take A Closer Look At Me/Then I Met You/Bill, Are You Coming Back/The Loving Country

Up The Ladder To The Roof is an absolutely barnstorming hit single of an opener - catchy, melodic and the girls' voices in perfect harmony.
Then We Can Try Again is an impressive, infectious typically Motown song too. The quality is continued on Everybody's Got The Right To Love, with its trademark Motown backing once again, it was also a chart hit.
The pulsating Wait A Minute Before You Leave Me keeps the standard high. This material is as good as most of the stuff put out under the Diana Ross & The Supremes name in their final year.
You Move Me, as on several of their songs, sounds as if Diana Ross is back on lead vocals, similarly with the honey-sweet But I Love You More. Jean Terrell sounds almost exactly like her at times.

I Got Hurt (Trying To Be The Only Girl In Your Life) is a very soulful, vibrant number, another underrated "forgotten" great Motown song.
Baby Baby is a punchy horns and bluesy drums number that once again adds to the impression that this is a very good album. Of the four albums, it is probably the best.
Take A Closer Look At Me has a big, rumbling backing and a solid, powerful  vocal from Terrell, as indeed she does on the Ross-like Then I Met You.

Bill, Are You Coming Back was one of those moving anti-Vietnam war songs, like Martha Reeves & The Vandellas' Forget Me Not and Freda Payne's Bring the Boys Home. It is a real Motown stomper, almost Northern Soul in its danceable beat. Another of those long lost classics. Great vocals and an uplifting beat. Energising stuff.
The Loving Country is a lovely, soully song with yet another solid muscular Motown pounding beat. I find this a really invigorating, enjoyable album, by far the best of The Supremes' post Diana offerings. Highly recommended. Early seventies Motown at its best. 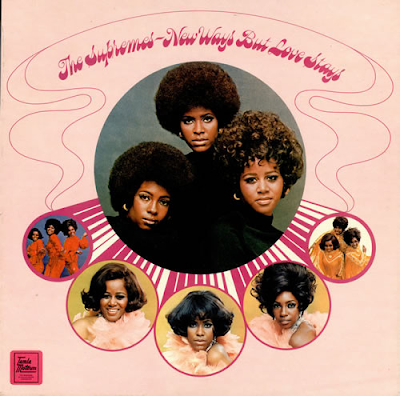 Together We Can Make Such Sweet Music/Stoned Love/It's Time To Break Down/Bridge Over Troubled Water/I Wish I Were Your Mirror/Come Together/Is There A Place (In His Heart For Me)/Na Na Hey Hey Kiss Him Goodbye/Shine on Me/Thank Him For Today
The Supremes released two albums in 1970, both produced by Frank Wilson. This is the second. It is quite a varied, adventurous album in places, as Wilson looks to break out from the grip of Holland-Dozier-Holland and change musical directions, slightly.

The opener, Together We Can Make Such Sweet Music, is an underrated Motown classic, with a killer hook and singalong refrain.
Now, talking of Motown classics, what about the next track, Stoned Love, here on the album with its little played slow tempo vocal intro. It kicks into a glorious thumping Motown beat. Possibly the best track The Supremes, in this incarnation, ever recorded. The vocals, the backing, everything about it is superb. Rightfully, it was a huge hit. The album version also contains extended saxophone in the middle too.
It's Time Break Down is a slightly jazzy, but still pulsatingly Motown number, with some excellent buzzy guitar and infectious percussion. It has echoes of The Temptations' "psychedelic soul" in its backing. Similarly backed is the girls' cover of Bridge Over Troubled Water, which actually comes off. It has the gospelly voices that you feel the song always suited best anyway. Those buzzy guitar parts are simply sublime. Check out the bit just before the "when you're down and out" bit. This cover is as it should be - a new, inventive reinterpretation and it works really well. It is one of the best versions of the song.

I Wish I Were Your Mirror is a funky, typically upbeat early seventies Motown number, with a great lead vocal and that pounding tambourine and drum backing. Similar to Bridge Over Troubled Water, The Beatles' Come Together is done convincingly, the shuffling groove suiting the vocals, together with some buzzy guitar again and clavinet.
Is There A Place (In His Heart For Me) is a syrupy, string-backed slow late-night ballad, one or two of which populated most of these early seventies Motown albums.
Steam's hit Na Na Hey Hey Kiss Him Goodbye doesn't quite come off as well as the other covers. It doesn't quite suite the group, in my opinion, although it is catchy and rhythmic enough.

Shine On Me is an infectious, typically Motown song, with a psychedelic-influenced ending while Thank Him For Today closes the album in a punchy, lively, bassy style. The sound quality on the album is excellent too. Full, warm Motown stereo sound. This was not a bad album at all. Worthy of a quick half an hour every now and again. 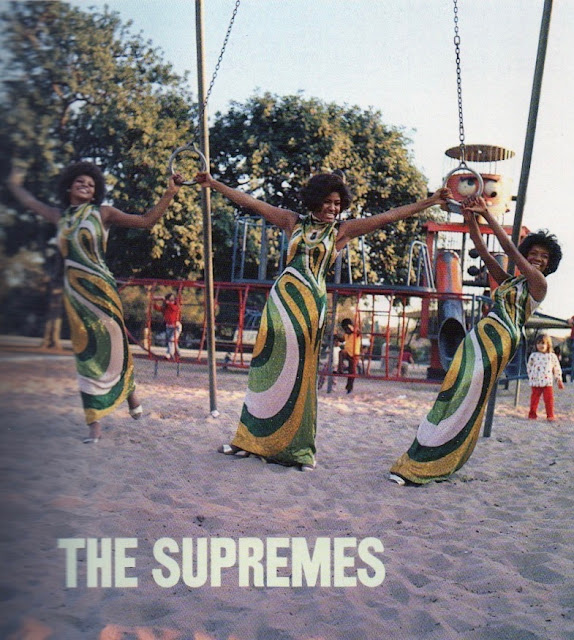 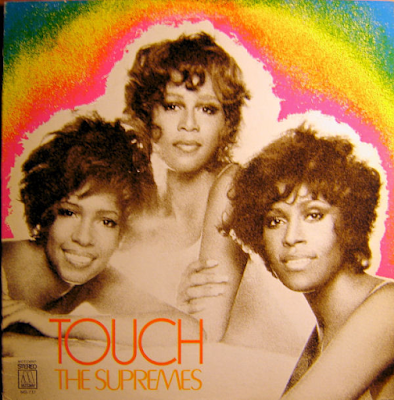 The Supremes were considerably under-shadowed by their ex-main voice, Diana Ross, who was releasing some credible Motown/soul albums in these early seventies years. The Supremes, though, put out some good material themselves, although their singles outshone the albums.

This is a pleasant enough album that is pretty par for the course for Motown in 1971 - immaculate production, appealing melodies, big horn-driven production, lush string arrangements.
The opening track, This Is The Story, serves to exemplify that type of track. The next one, the wonderful Nathan Jones stands as evidence of those great singles. What a great track it is. Rumbling bass, thumping drums, clunking piano, wah-wah guitar, intoxicating percussion and the girls on perfect vocal form. It should be in any "best of Motown" compilation.
Here Comes The Sunrise has airs of the verses of Ain't No Mountain High Enough about it, while Love It Came To Me This Time has lead voice Jean Terrell sounding almost exactly like Diana Ross.

Johnny Raven would maybe have made a good single, but somehow it doesn't quite get there, despite its Stoned Love-style percussion backing and Nathan Jones echoes at times.
Touch was a slow-paced ballad and was bizarrely chosen as a single. Let's be honest, none of the rest of the songs pull up any trees, so to speak, they just wash over you pleasantly enough but without particularly sticking in the mind. This is simple an enjoyable, inoffensive early seventies Motown album. Time And Love ventures dangerously close to schmaltz, however. 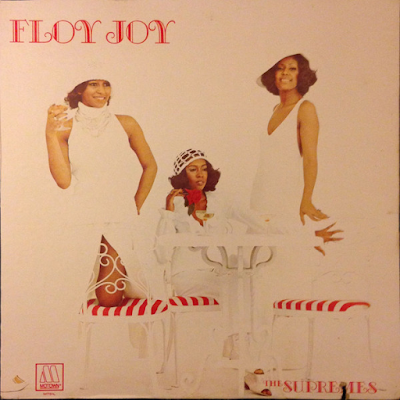 This was the fourth of The Supremes' early seventies Motown albums. All of the songs contain songwriting input from Smokey Robinson, and you can tell. Just listen to the memorable opener - Your Wonderful Sweet Sweet Love which is, in my opinion, a true "forgotten" Motown classic. It is catchy, melodic, bassy and singalong at the dame time. Jean Terrell's vocals are superb on this. Wonderful stuff.
The same applies to the hit single Floy Joy, which features a smoky vocal and irresistible guitar and vocal refrains from Mary Wilson and Jean Terrell. It is such a nostalgic memory of the early seventies for me.

A Heart Like Mine is a late-night, soulful romantic number with a lovely lead vocal from Mary Wilson. Over And Over has Terrell sounding just like Diana Ross and it has a real late sixties feel to it. Precious Little Things is a shuffling, rhythmic groove of a love song.

The old "side two" started with a lengthy, funky groove in Now The Bitter, Now The Sweet, with new member Cindy Birdsong on lead vocals, an adventurous, brooding number with sight hints, for me, of Smokey Robinson's Just My Soul Responding. It is the most "adult", least commercial, most credible track on the album.
Automatically Sunshine has Terrell and Wilson sharing vocals once more on the well-known hit single. The Wisdom Of Love is a laid-back, sleepy soulful groove. All very tuneful and relaxing. Oh Be My Love has a killer buzzy guitar intro and a funky rhythm to it with some delicious drum work.

This was a typical, very short early seventies album. In my view it is a better collection than the previous year's Touch, indisputably due to Smokey Robinson's input. 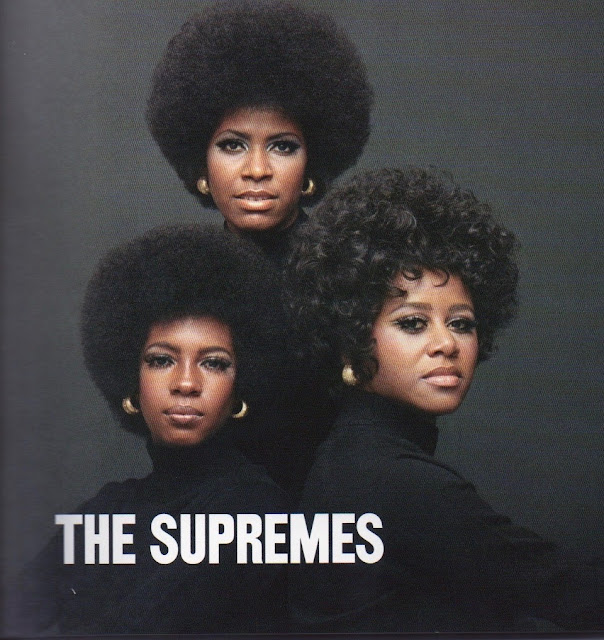