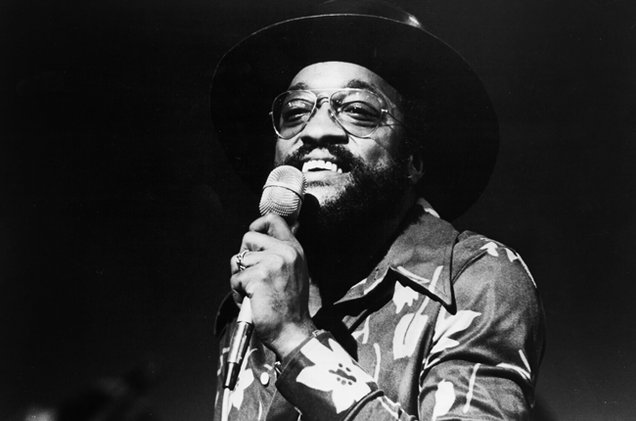 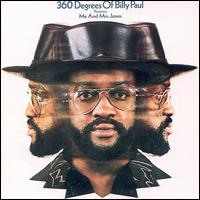 The late 60s/early 70s was overflowing with inspirational slices of “social comment”/aware songs from black artists - The Temptations, Sly & The Family Stone, The O’ Jays, Curtis Mayfield, Isaac Hayes, The Undisputed Truth and Marvin Gaye among others. Black consciousness was right at the forefront, and many tracks proved it was possible to be both danceable and funky yet still have something very important to say. Smooth soul singer Billy Paul showed this as well with this excellent album.

Everyone knows the love-lorn soul classic Me And Mrs Jones but the album also contains the “blaxploitation” classic, defiant and questioning Am I Black Enough For You?, the "make your father proud" funk of Paul's plea to his young daughter in the black-conscious Brown Baby and the extended, dramatic plea of I'm Just A Prisoner, a song from a character who has served unjust time. These are very credible pieces of work which lift this album above just an average smooth soul one. These early albums on the Philadelphia label were very much in this vein, certainly the first two O'Jays albums are. 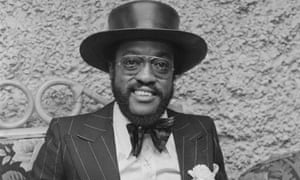 Tracks such as Brown Baby and I'm A Prisoner have a strong feel of Curtis Mayfield's ground-breaking 1970 Curtis album about it. The closer, I'm Gonna Make It This Time, is a passionate slice of slow-paced inspirational soul.

Other tracks on the album are covers. However, they are covers that completely reinvent the original. Elton John’s Your Song is virtually unrecognisable in its new form of six-minute soul slow burner.
Also, Al Green’s Let's Stay Together is slowed down even more than the original and thus gains a completely new life, as does Carole King’s AOR classic It's Too Late. Paul’s voice is strong enough to breathe a different life into all these tracks. Overall, a most enjoyable album. It also has to be stated that the remastered sound by BBR is superb. 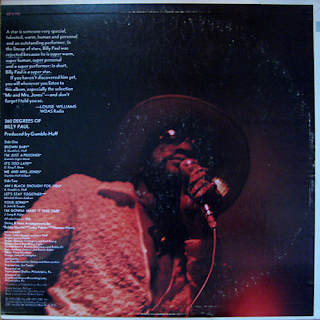 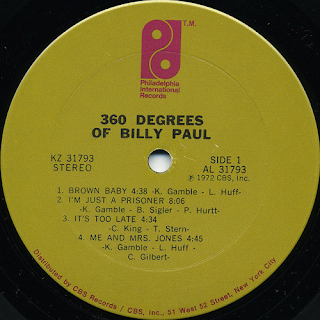 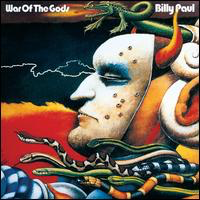 This album, from 1973, is like nothing Billy Paul recorded before, or subsequently. There are only six songs on it. He freely admits it was his attempt at doing his own What’s Goin’ On in response to his friend Marvin Gaye’s classic. He didn’t do badly, either. Assisted by Kenny Gamble and Leon Huff, the is a special album, almost extended psychedelic soul, like The Temptations’ 1973 Masterpiece and some of The O’Jays’ 1972-73 work - Ship Ahoy in particular. Social awareness and concern for the planet and its future was the name of the game, particularly as the Vietnam War was still going on.

I See The Light is a slice of laid-back effortless mid-tempo funky soul with a psychedelic, trippy edge. Billy Paul’s raising, soulful voice dominates it, of course.

War Of The Gods is ten minutes of piano and percussion driven funky soul, full of changing pace and ambience and some almost classical piano passages and Billy lamenting the state of the world in general. Some of the jazzy, funky parts are just wonderful. The remastered sound is crystal clear too. Some “spacey” noises on it as well, before some Latin percussion takes you into another piece of mesmerising groove. A great track.

The Whole Town's Talking is one of the most typical pieces of pure soul on the album - an upbeat, punchy, brass and percussion driven groover enhanced by Paul’s effortlessly funky vocal. Great stuff.
Slow in tempo and in the Me & Mrs Jones vein is the sumptuous and lengthy I Was Married. Again, Paul’s control over the song is almost nonchalant. The brass parts on this track are so good, sound-wise. Superb.
Thanks For Saving My Life is an upbeat slice of typical seventies Philly soul. It just has a joyous feel. Peace, Holy Peace is a return to Curtis Mayfield/Marvin Gaye inspired territory, with Paul’s soulful, impassioned vocal soaring over a  churchy organ and a gospel choir backing. It just drips with soul. Boy, this guy could sing. He never really got the credit he deserved, not fully.

Incidentally, the inner sleeve had one of those bizarre pics so popular in the seventies - Paul is pictured in a sort of African tribal robe standing in a rocky wilderness, looking quite profound, but incongruous. 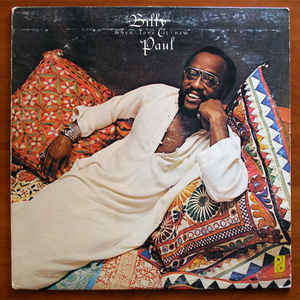 After 1973’s “conscious”, experimental album in War Of The Gods, 1975’s When Love Is New was a bit more of the same - a mix of meaningful social comment songs and blatantly romantic “late night lurrve” smoochers. (The little-known Got My Head On Straight did come in between, however).

The first three tracks fall into the “socially aware” category. People Power is a disco-ish, orchestrated exhortation to “give power to the people, if we all pull together…join hands” etc. As usual, Paul’s voice dominates proceedings.

America (We Need The Light) is a captivating slice of funked-up disco, with a message for Paul’s country to wake up and see what’s going’ down, man. It has that genetic, cymbals-led groove that features on Harold Melvin & The Blue Notes’ Bad Luck, an intoxicating recipe. Billy Paul’s voice is just so good - as smooth as velvet but with a slightly edge. He can cope with whatever is then a him though - fast or slow, funky or smooth.
Let The Dollar Circulate has something to say to financial organisations (now where have we heard that one before?). It is Temptations-esque in both sentiment and orchestration. It is a funky pot-boiler with a big “movie soundtrack” string backing, together with some pounding drums and Paul telling us that “politicians talkin’ crazy” and wondering “if it is all because of Watergate?" Very much in Ball Of Confusion territory.

The odd Malorie provides a bridging point between the two distinct atmospheres n the album. It is light, airy, jazzy upbeat number with “easy listening” brass and a feathery vocal from Paul. It is pleasant enough, but sits slightly incongruously after what had been before, or indeed with the serious lovin’ that was to come.

Now, it’s time to dim those lights and slide on up next to me on that couch, honey….Three full-on late night love songs are up next. First off is the beautiful When Love Is New - relaxing, slow-paced and romantic.
I Want 'Cha Baby starts with some soulful saxophone, sweet backing vocals ad a yearning vocal from Billy. “I need your body close to mine…” you get the picture?
Let's Make A Baby speaks for itself…"don't be shy, let's get down and multiply....". That one made me smile. Some great bongo percussion at the end of the track, as well.

Billy Paul has never rally been given the credit that say The Temptations, Marvin Gaye, Curtis Mayfield, Harold Melvin & The Blue Notes or The O’Jays garnered over the ensuing years, which was a shame. He was not just Me & Mrs Jones. 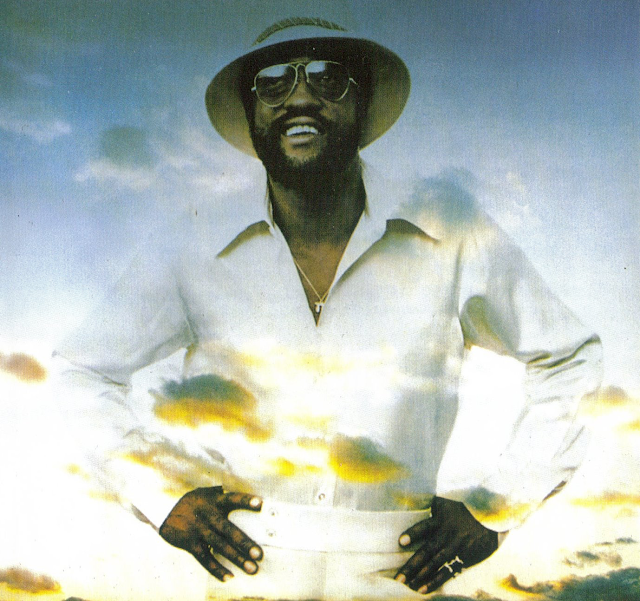 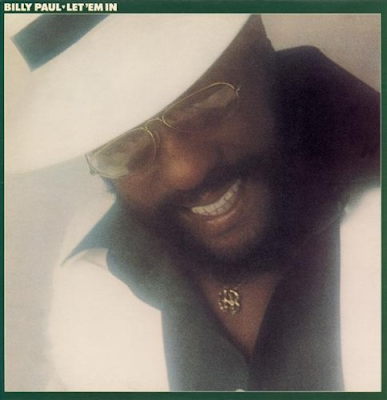 This is a most impressive album from Billy Paul, released in 1976, as his star was just beginning to wane, slightly. It shouldn’t have done, though, because this is one hell of a good soul album. Packed full of funk and soul.

Let 'Em In is a unique cover of Paul McCartney’s iconic song - rhythmic, infectious and featuring different lyrics and a stunning vocal from Paul.
We All Got A Mission is a hot, slow-cooking piece of gospel-influenced disco. As with all the album, the bass is superb and the wah-wah underpinning the tune is impeccable. Paul’s vocal on here has that throaty Am I Black Enough For You tone. Kicking horns on it too.

How Good Is Your Game has a simply wonderful intro - funky bass, acoustic guitar and bongos and the vocal delivery is peerless. This is just completely captivating seventies soul of the highest order.

Love Won't Come Easy is a big, bassy slab of horn-driven disco funk. Wah-wah guitars and Paul’s voice soaring above it all, effortlessly.
Then there is an excellent cover of Nilsson’s Without You. All of Billy Paul’s covers are completely credible. He gives this emotional song just such soul. If anything it improves on the original. 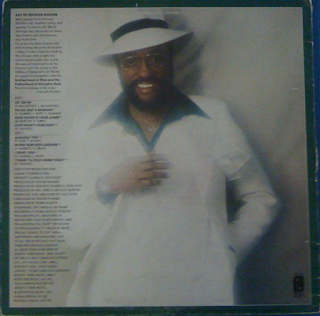 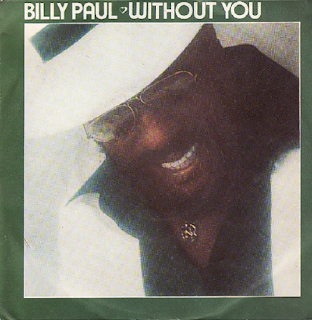 Word Sure Gets Around has a Stax-style spoken “telephone conversation” intro before some sweet saxophone and Paul’s sumptuous vocal kicks in. Again, such high quality. Effortlessly played and a joy to listen to.

The upbeat I Trust You is like Harold Melvin meets Bobby Womack. Paul’s voice is very Womack on this one. Lovely upbeat, horn-driven disco/funk backing, once again.
I Think I'll Stay Home Today is an example of sweet, smooth typical mid-seventies soul. Totally sublime in so many ways. Great vocal and addictive rumbling bass backing under those sweeping soulful strings.

One tiny complaint is that, at only eight songs in length, it was an incredibly short album, to be honest. Room for at least one or two more songs. That aside, it is a great album, and strangely under-appreciated, critically. 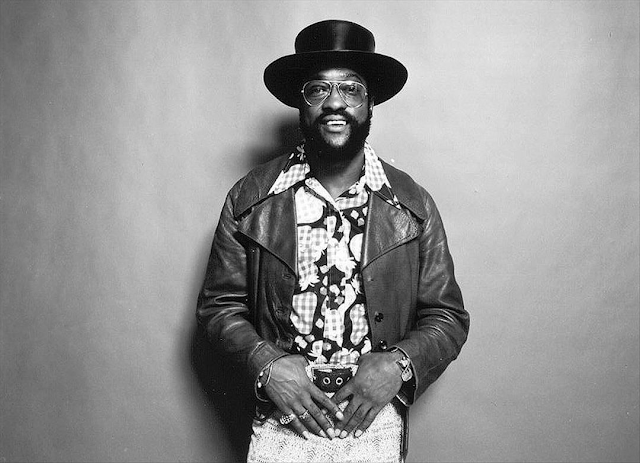