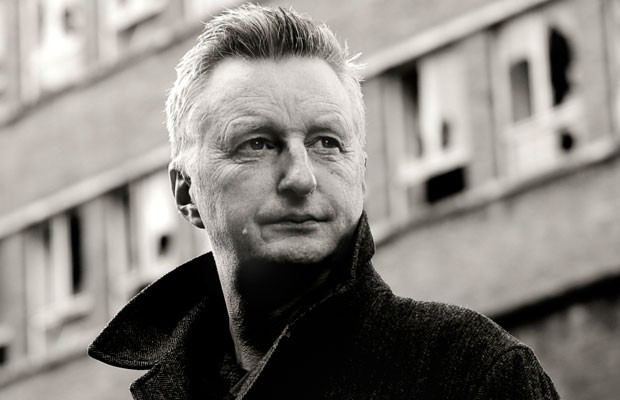 "It wasn't so much their lyrics as what they stood for and the actions they took. That became really important to me. Phil Collins might write a song about homelessness, but if he doesn't have the action to go with it he's just exploiting that for a subject. I got that from the Clash, and I try to remain true to that tradition as best I can" - Billy Bragg 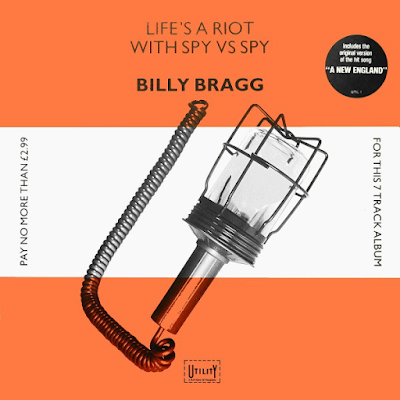 The Milkman Of Human Kindness/To Have And Have Not/Richard/A New England/The Man In The Iron Mask/The Busy Girl Buys Beauty/Loves Town Revisited
This was actually just a seven track extended EP, lasting just sixteen minutes of ex-soldier Billy Bragg, who nobody knew anything about at the time, and his clashing, reverb-soaked electric guitar and un-reconstructed Essex, glottal-stop droning voice. Never mind the voice, which admittedly is an acquired taste, he had a commitment and political honest morality that was admirable, to me, anyway.  He had a Clash-like punk ethic and an articulate, intelligent and thoroughly unpretentious anger. He wasn't merely a fist-pumping tub thumper but he had a message to get across and he was going to use his Woody Guthrie-inspired travelling troubadour persona to do it. The musical backing would develop on later albums, but here it was just the man and his guitar. It is raw, edgy, lo-fi and very "alternative". Very home produced. Therein lies its appeal, however.

These songs were almost like demos for the sort of material that would be given better musical backing on later albums. Politics are never far from the surface, of course, but it doesn't tell the whole story. It was often overlooked at the beginning that Bragg could also pen a sensitive lyric too, as a song like the evocative The Milkman Of Human Kindness proves.
To Have And Have Not is about getting qualifications and trying to avoid the social inequality between rich and poor. He already had his finger on the pulse regarding the university of hard knocks. "At 21 you're on top of the scrapheap, at 16 you were top of the class". He also questions own political persona with disarming honesty. 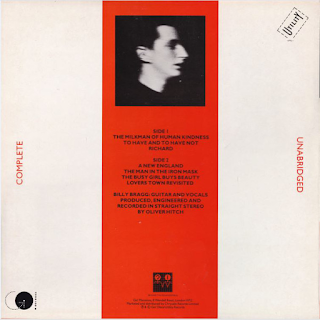 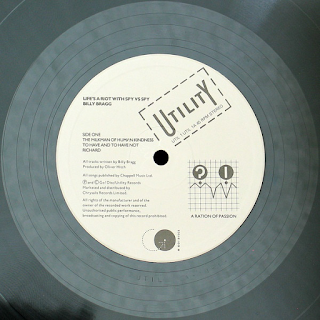 Nobody does little vignettes and characterisation of ordinary people quite like Billy Bragg. His songs are full of characters that we have all known. Richard is one of them. Another delightful little social sketch is the atmospheric, cynically moving A New England. "I love you then as I love you still, I put you on a pedestal, they put you on the pill...". Bragg delivers these words mournfully yet sensitively as he gazes off into the distance into the wet night streets over the top of his beer. "I don't want to change the world, I'm not looking for a New England". I'm just looking for another girl." Absolute classic Billy Bragg.

The Man In The Iron Mask is a brooding, stark typically Bragg love song. It is mysterious and haunting, showing that Bragg had a talent for writing this sort of song.
The Busy Girl Buys Beauty has Billy exploring his frustration with the (in his opinion) vacuous lives of some older teenage girls as they move into womanhood. I can't help but feel it is just a little patronising though.
Lovers Town Revisited is one of the best songs on the album, a short, sharp tale of trouble outside nightclubs.

While this was a hard-hitting introduction to the music and lyrics of Billy Bragg, for me, there was much better to come. 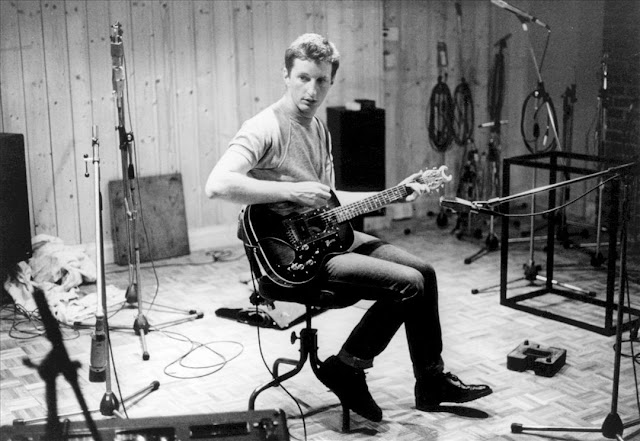 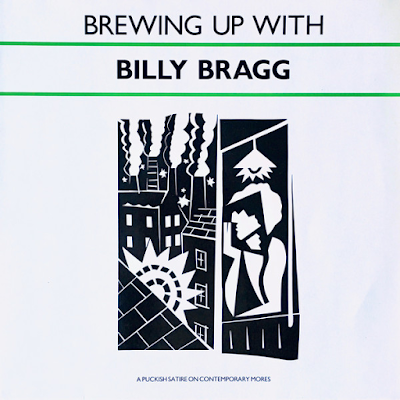 After the mini LP that was Life's A Riot With Spy Vs. Spy from 1983, this was Billy Bragg's first full album of songs, still largely delivered in a raw, edgy fashion featuring his voice and his crashing, jangling electric guitar. There have been additions, though, a delicious trumpet and organ in places, plus a sweeter tone to the guitar.

The songs are the now established subjects of political, corruption, injustice and naive, nostalgic love.  Bragg does all of these so well.

It Says Here is a magnificent, vitriolic condemnation of the gutter press that has my full support. "They offer you a feature on stockings and suspenders while calling for stiffer penalties for sex offenders...". What a great line. It is one of favourite Bragg songs.
Love Gets Dangerous has an addictive guitar riff of a deeper, fuller tone than on the previous album. Bragg explores the cynical side of relationships. He uses double tracked vocals as well, for the first time.
The Myth Of Trust has a bass riff and a mysterious moody feel to it. The clash of the electric guitar riff sounds like some of Steeleye Span's early electric folk rock work. I remember initially finding this album less easy to get into than its predecessor. My view has changed over the years. It has hidden depths. 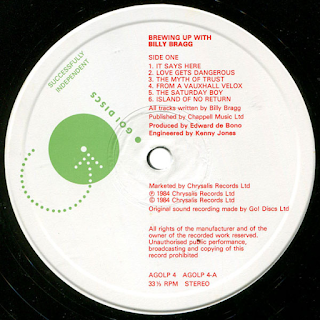 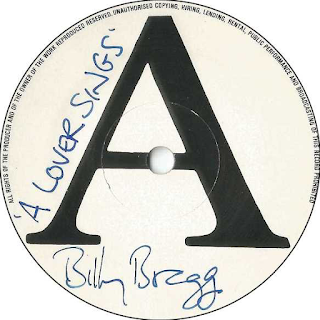 From A Vauxhall Velox gently lampoons Dylan's From A Buick 6 on an edgy, guitar-driven stream of consciousness, rapidly sung number. The lyrics are pretty incomprehensible, something about the class system... The song also has a Chuck Berry-style "bridge" in the middle.
The Saturday Boy is just beautiful. One of those so evocative, movingly nostalgic tales of school and teenage love.  It is disarmingly fetching. "We'd sit together in double history twice a week and somedays we'd walk the same way home and it's surprising how quick a little rain could clear the streets...". Then that sumptuous horn kicks in and I feel decidedly tearful. Great stuff.

Island Of No Return is an anti-war song telling of Bragg's time in the British Army and also The Falklands War.
St. Swithin's Day is the best track on the album. Another of those great, atmospheric love songs. It is timelessly beautiful. It also uses a bit of bass and percussion at one point. "The polaroids that hold us together will surely fade away, like the love that we spoke of forever on St. Swithin's Day...". Lines like that are up there with the best of them. 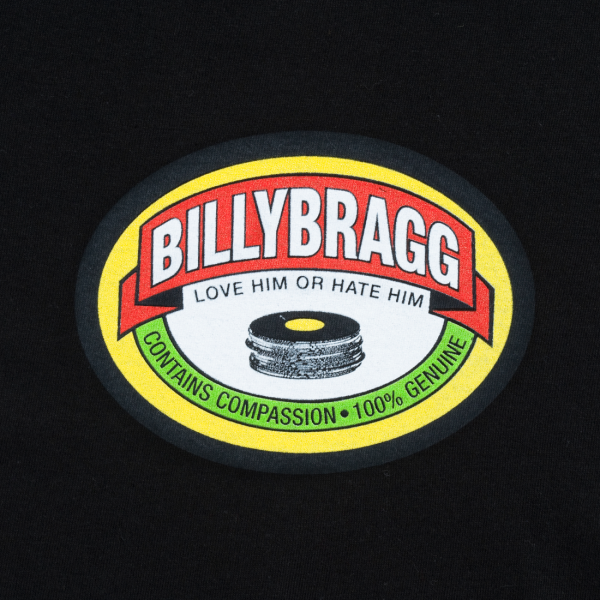 Like Soldiers Do sees Bragg revisiting Army memories once more. This Guitar Says Sorry has always seemed a bit of a cacophonous mess to me, however. Sorry Billy, not one of my favourites.
Strange Things Happen brings back echoes of the previous album. Whereas much of the earlier material showed signs of progression, this is very much in the same vein as the previous offering.
A Lover Sings, however, is a different kettle of fish, featuring an infectious organ backing and an almost soulful feel and vocal from Billy. Great lovelorn lyrics too.

This was the bridging album between the debut and the next one, which would go "full band" and also really develop Bragg as a credible singer/songwriter. 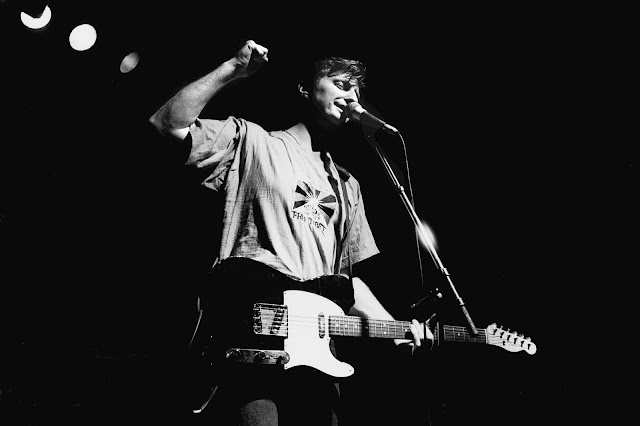 Talking With The Taxman About Poetry (1986) 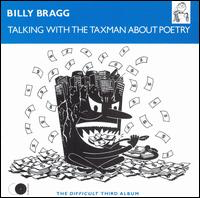 This was Billy Bragg’s first proper “full band” album and it was not half bad. The stark, guitar-only sound of his first two offerings had been expanded upon. Keyboards, bass, drums, orchestration and even trumpets were being used now, to great effect too. It sounds just a little bit tinny these days, but back then, it was a big development for Bragg.

There are some great, sensitive, often world-weary love songs on here - such as the catchy Greetings To The New Brunette (“I’m celebrating my love for you with a pint of beer and a new tattoo”) and The Warmest Room.

The cute observation of The Marriage with its sad, yearning trumpet solos; the country rock of Honey I'm A Big Boy Now; the frantic blues of Train Train and the soul-searching self-pity of Wishing The Days Away and Levi Stubbs' Tears. Billy has always been an arch realist and at times, somewhat mournful. These songs are all like that. The analytical, almost philosophical The Passion exemplifies such feelings. 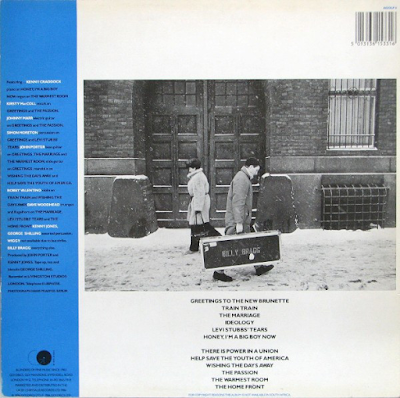 Then, of course, there are the great political/social comment songs - the lyrical paraphrase of Bob Dylan’s Chimes Of Freedom in Ideology (“just the sound of ideologies clashing”); the adaptation of the US Civil War song Battle Cry Of Freedom in the fist-punching There Is Power In A Union; the healthily anti-American Help Save The Youth Of America and the album’s best song, the marvellously evocative, imagery-packed and moving The Home Front. It was just such a great song for those of us who didn’t buy the nauseating “loadsamoney” shit of the mid-1980s. The whole album was. It gave me hope that there were some still around who thought and felt as I do. At times it could feel as if there wasn’t anyone. It still does. 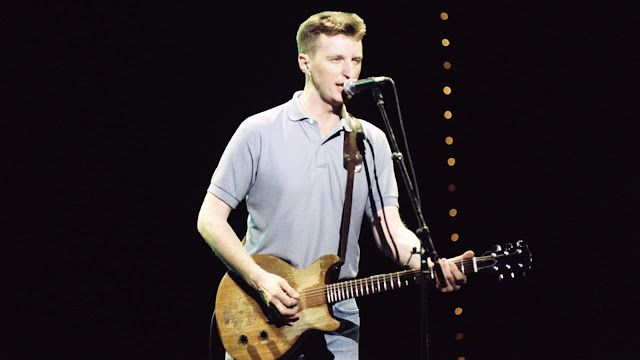 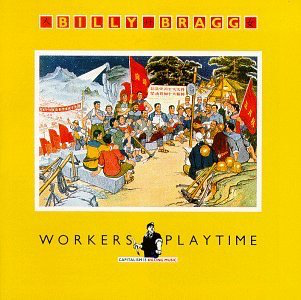 After two (and a half) albums of mainly hard-hittting, often cynical politically-motivated material, Billy Bragg realised that he was at something of a crossroads in his music career, as he referenced in Waiting For The Great Leap Forwards - “will politics get me the sack?”. He decided to let his heart do the talking on this album more than he had before (although St. Swithin’s Day, This Saturday Boy, Greetings To The New Brunette and Levi Stubbs’ Tears were previous heartfelt “love” songs), and we get lovelorn Bragg classics like Must I Paint You A Picture?,
The Only One, The Short Answer and Valentine's Day Is Over which are up there with his finest ever songs. Indeed, there is a case for their being some of the finest love songs written by anyone. He strips love down to its bare, obsessive bones and bares his soul starkly and beautifully. He wonders “can this sticky stuff really be love” and muses on how his parents could have conceived of him. Deep and very meaningful.

Then there is the depressed cynicism of the failed lover in Little Time Bomb and The Price I Pay. Billy isn’t having much fun at this time in his life, it seems. 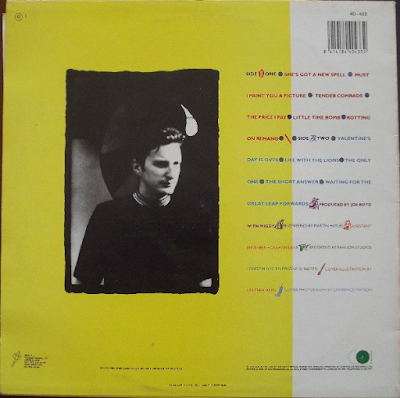 There are also some more oblique songs, lyrically, such as the mysterious and melodic She's Got A New Spell and the country rock and self-loathing lyrics of Life With The Lions.

The politics is still there of course with the vocal-only and plaintive Tender Comrade and the bleak reality of prison life in Rotting On Remand and the album’s anthemic tour de force, Waiting For The Great Leap Forwards which builds up marvellously into a singalong celebration of Bragg’s possible movement into stardom (something he knew would never really happen). He paraphrases Mott The Hoople’s All The Way From Memphis too at the song’s climax - “it’s a mighty long way down rock ’n’ roll, from “Top Of The Pops” to drawing the dole…”. Quite, Billy. Here’s to you. 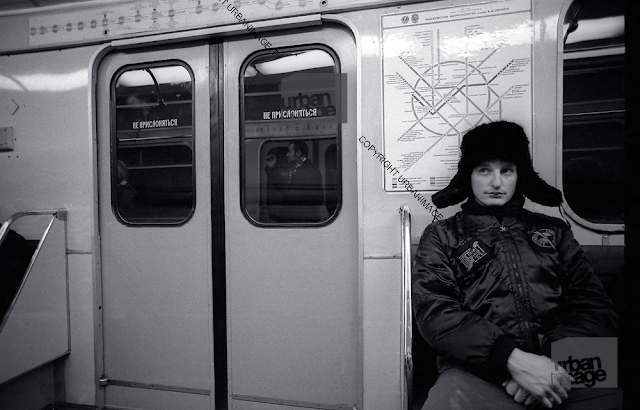 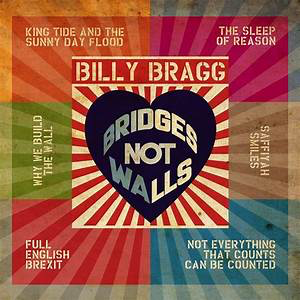 The Sleep Of Reason/King Tide And The Sunny Day Flood/Why We Build The Wall/Saffiyah Smiles/Not Everything That Counts Can Be Counted/Full English Brexit
Sometimes, particularly these days, one can get quite disillusioned by what is going on in the country, and indeed, the world. It is at times like those that I find I turn to Billy Bragg. He never lets me down. He meets modern day issues head on. Saffiyah Smiles is about an Asian girl who faced down a loathsome fascist thug with a smile; Why We Build The Wall attempts to ask if there is some sort of reason to Trump’s lunatic America; King Tide And Sunny Day Flood addresses the problem of climate change; and on the magnificent Full English Brexit Bragg sings in the role of a “leaver” moaning about “measuring in metres not feet”.

Yes, he can be a little bit ham-fisted in his delivery, but his heart is in the right place and, as he does here, he is brave enough to sing in the persona of his political opponents, not an easy thing to do. Thanks Billy. You restore my faith that I am not alone. As you have done for thirty years. 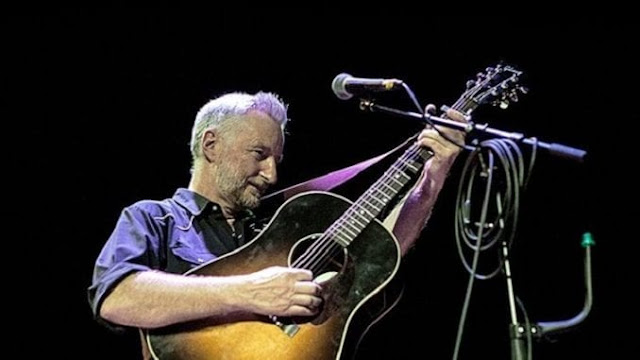