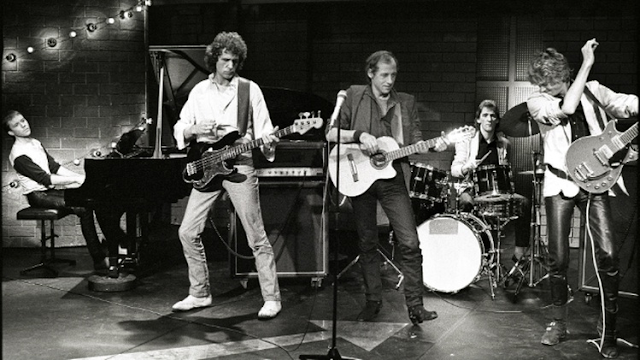 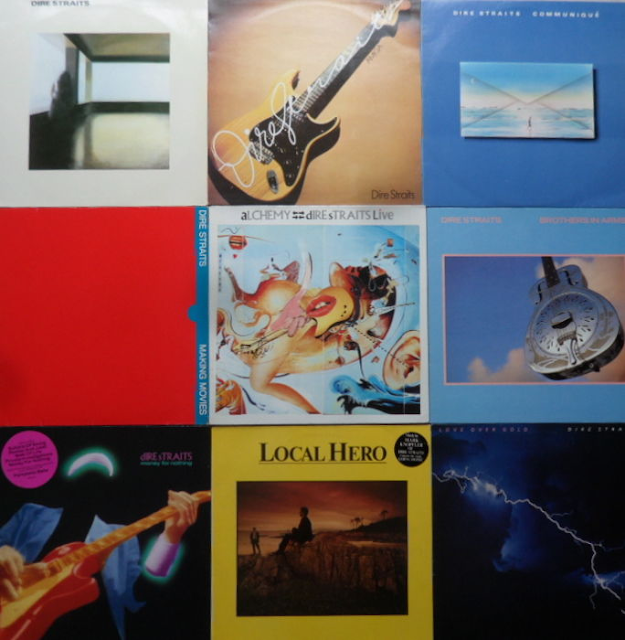 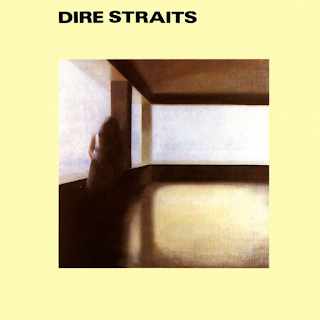 What also often slips under the radar is what a Newcastle album it is. Some songs refer to the North-Eastern UK city - Down To The Waterline and its mention of the “dog leap stairs”, a steep flight of old stone steps in the city centre, and the evocative Southbound Again, about catching the train down to London. There is also Wild West End, an atmospheric song about Knopfler’s experiences once getting to London. It features great lyrics about the conductress on the number 19 bus Knopfler is travelling on and references to Shaftesbury Avenue, Chinatown and coffee at Angelucci's. Other highlights are the mysterious, slow-burning Six Blade Knife, In The Gallery and, of course, the massive chart hit and darling of subsequent Radio Two playlists, Sultans Of Swing. The story of an honest, working blues rock band, it has a timeless appeal that keeps it on those oldies playlists. Then there are Knopfler’s killer guitar parts in it. 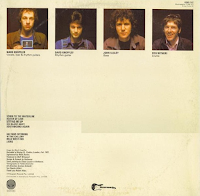 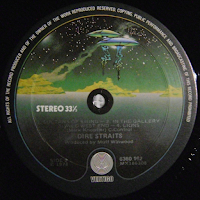 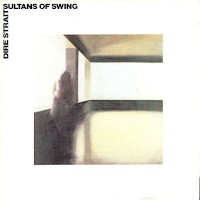 Water Of Love has a fabulous, bottleneck-ish bluesy guitar and a captivating, shuffling rhythmic to it. There is a rawness to this that helps to make this a really credible, appealing album. It has a great throbbing bass line too. Setting Me Up continues in that country blues vein, but with a faster pace and catchier beat. It is equally as infectious, though. Lions ends the album on a laid-back but still bluesy note. All these songs are packed full of smoky atmosphere, you could pick any of them. Check out that wailing guitar on this one. however. Great stuff. You can almost smell the beer and hear the traffic go past in the rain, the whole album has that sort of atmosphere.

Overall it is a great, wholehearted, honest laid back rock album that could have been played by the band in Sultans Of Swing. It was respected at the time, even by the punks and new wavers and deserves the same today. 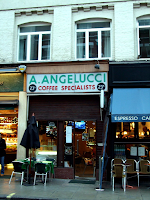 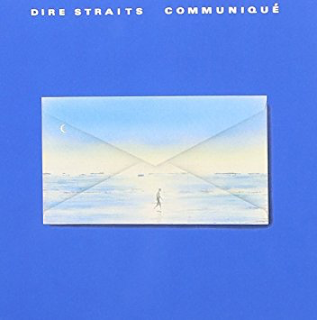 The follow up to the outstanding debut album was basically more of the same - intricate guitar work backing a laid back folk rock style vocal. It doesn’t stray far from the formula and is certainly not a bad album but for some reason I do not play it as much as either the debut or the next one, Tunnel Of Love. It is a competent, well-played collection of songs but with not quite the ambience of the debut, and certainly nothing as individually notable as Sultans Of Swing. The closest it gets is the soundalike, Lady Writer, which was an unsuccessful single.

Portobello Belle is another catchy one too, with Mark Knopfler paying homage to parts of London again, and an Irish girl who he encountered there, following his “emigration” there from the North East. This track has all the atmosphere of the previous album, to be fair.

The extended rock workout of the opener, Once Upon A Time In The West is probably the other true standout, while News has an appeal particularly in its alternate speaker drum fadeout and its tricky guitar sound. 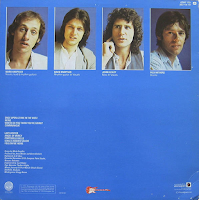 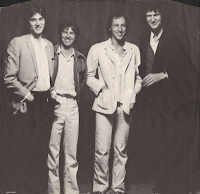 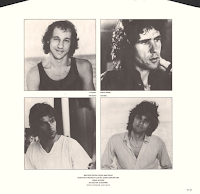 Where Do You Think You're Going probably reflects the influence of Bob Dylan, Knopfler having worked with him on Slow Train Coming in that same year. Communiqué is an upbeat piece of bar-room blues drive by some suitably lively piano initially until it settles comfortably into a archetypal Dire Straits laid-back groove.

Angel Of Mercy is an appealing, typically early Dire Straits number, with trademark easy and slow guitar picking and one of those laconic, bluesy Knopfler vocals. An excellent solo bit of guitar can be found in the middle. It has a bit of a singalong chorus too. Single Handed Sailor has a great atmosphere to it a bit like the previous album's Down To The Waterline. Knopfler once more contributes a deadpan but enticing vocal and, ofcourse, a great guitar picking solo. The song finishes with more of the same.

Follow Me Home has some tropical insects and lapping waves against the shore sound effects before an unusually African-sounding conga sound introduces the song which is a supremely chilled-out one. Knopfler's vocal is positively sleepy as he sings about wanting a woman to follow him home. It is a bit of a hidden gem - a delicious slow blues groove in the style that Chris Rea would specialise in during the mid-eighties.

Recorded in The Bahamas, Mark Knopfler had said the location relaxed him too much and took some of the edge from his playing. Granted, he is right about it not having quite the earthy appeal of the debut, but the chilled out feeling is maybe one of the album’s strengths.

It is a bit unfair to criticise this album just because it sounds like the first one. Of course it does. It’s Dire Straits. What else should it sound like? 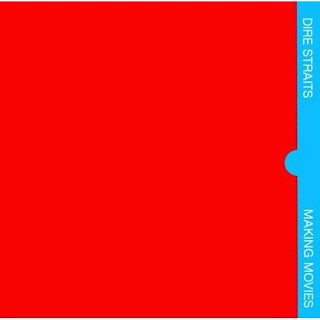 Released in 1980, this was the album that saw Dire Straits take their first steps from being a cultish ”pub rock”-ish band into a multi million selling outfit beloved of those whose only other albums were by Phil Collins and Michael Jackson.

This wasn’t quite Brothers In Arms though and is still a highly credible album. First of all, it contains the magnificent opener, Tunnel Of Love, a seven minute gloriously atmospheric tale of the fairgrounds in Whitley Bay, in the UK’s gritty North East. Mark Knopfler’s guitar from half way through is just heavenly, joined by Roy (E St Band) Bittan on piano as it fades out takes the listener truly through the pearly gates. Then there is the laid-back hit single, Romeo And Juliet, with killer romantic but ultimately cynical lyrics. Skateaway concludes the old “side one” with another atmospheric extended song, with another knockout chorus. Great percussion and guitar feature, of course. 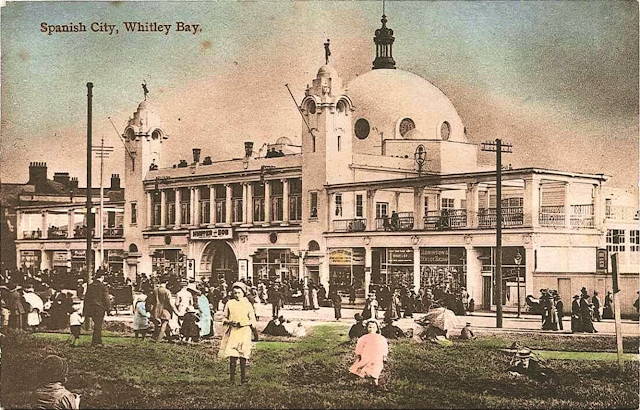 The old “side two” contains shorter, more punchy, rock orientated material. Espresso Love is probably the best track, followed by the chunky, riffy Solid Rock. Hand In Hand is a bit more ordinary, comparatively, and then there is the bizarre and utterly incongruous Les Boys - a completely odd song about cross dressers. It sits totally at odds with the rest of the album, to be honest. I am not quite sure what the point of it was. 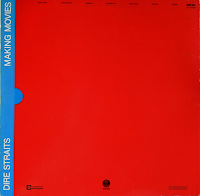 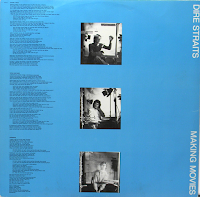 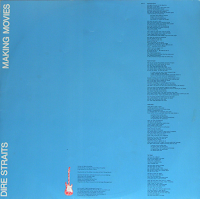 Unlike some, I have no real problem with Bob Ludwig’s remaster of this album. It is clear, full, nice stereo separation and probably as good as this 1980 recording could get. However, that is just my opinion. Others may differ, of course. Maybe the bass could be highlighted a bit more, but that is small beer, it is certainly not tinny. Listen to the point where Espresso Love kicks in. Big and full. I do agree, though, the the three subsequent Dire Straits albums have a richer sound to them. Maybe they always did. In fact I am sure they did. 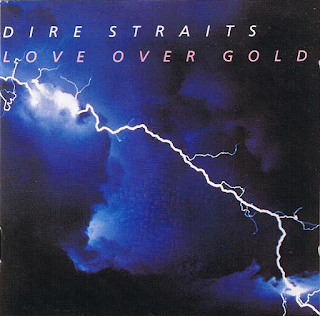 Dire Straits were not quite the world-dominating mega-band at this point, that came with Brothers In Arms two years later, they were on the cusp of huge popularity though, but that did not stop them putting out this decidedly uncommercial five track album of extended, atmospheric rock tracks. For me, while I prefer the debut album and 1980's "Making Movies", I always had time for this album, although I have to admit to not revisiting it too often.

The opener, Telegraph Road is fourteen minutes in length, but it never gets tiresome, largely due to its changes in pace and tempo and Mark Knopfler's various guitar skills that are on show throughout. There are rock patches, laid-back passages, a stunning solo at one point and evocative lyrics about the forming of America. It is a great song, no question. Forget its length.

Private Investigations is a whispered vocal, incredibly quiet song that never gets above walking pace but it absolutely crammed full of mystery and cinematic atmosphere. The bit where the music stops, a single bass note sounds and then Knopfler's guitar come slashing in sends shivers down the spine. Again, it is notable and unique track. 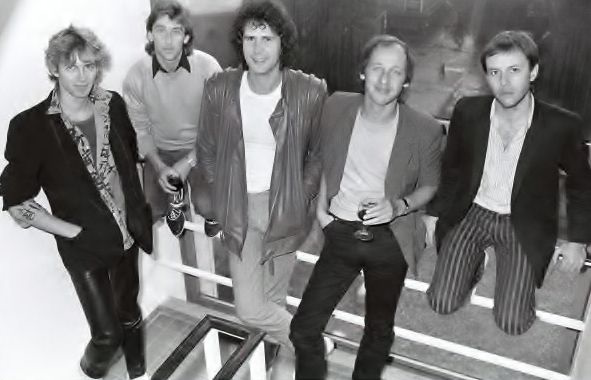 Industrial Disease raises the tempo somewhat in a typically Dire Straits rock and blues number, featuring some wryly humorous lyrics and then Love Over Gold brings it down again with a moody, brooding but melodically appealing number with a great Knopfler vocal and an overall captivating feeling to it. Once again the instrumentation is superb, with crystal clear, audio demonstration-style sound. The album closes with the catchy laid-back rock of It Never Rains, which has Knopfler's quiet semi-spoken vocal delivery at its best. He is the master of this sort of vocal and he never loses his ear for the melody. Overall this was an understated, innovative album that has remained under the radar quite a bit. I certainly much prefer it to Brothers In Arms. 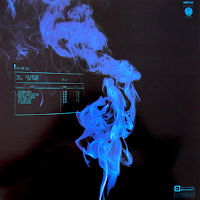 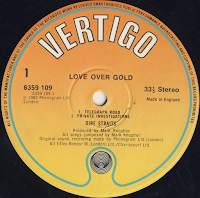 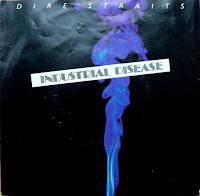 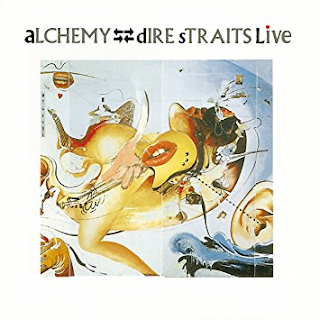 Released in 1984, by which time Dire Straits had become a “big” band and were playing places like the Hammersmith Odeon, where this was recorded, a sold out, enthusiastic crowd whoops and hollers along, despite much of the material being introspective, laid back and moodily atmospheric. Classic examples of this are the extended bluesy rocker Once Upon A Time In The West, the eerie Private Investigations, with its killer guitars interjections near the end, and the beautiful but solemn Love Over Gold .

The sound, despite being remastered, contains a considerable amount of live “buzz” noises, but it doesn’t detract from the quality too much. Overall, it is a good live album of a band just about to become massive. The crowd noises are stirring, particularly on Tunnel Of Love, as the guitar parts kick in. 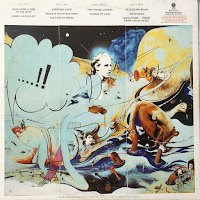 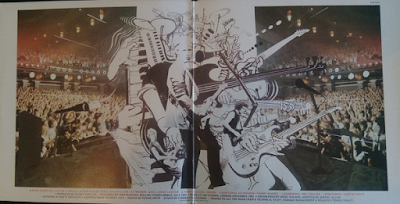 Highlights are extended, inspirational versions of Romeo And Juliet, Sultans Of Swing and, of course, the band’s masterpiece, Tunnel Of Love, given an extra, wonderful saxophone and guitar ending here. Bloody marvellous stuff. Actually, I was forgetting Telegraph Road, another fourteen-fifteen minutes of Straits’ magnificence. It ends with the anthemic Going Home, which builds up to its rousing climax quite exhilaratingly. 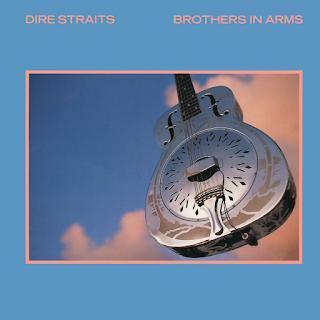 Up until the release of this record-breaking, multi-million selling album, Dire Straits were a low-profile, well respected honest rock band who eschewed all fashionable trends. With this release, the beginning of the end was in sight fir them, despite it being by far their most successful albums, and indeed one of the best-selling albums of all time.

The problem was that its laid-back, immaculately recorded hi-fi sounds attracted “non-music fans” and alienated the music media cognoscenti. All of a sudden it seemed to be open season on the “stadium rock” of Dire Straits. The homely pub-rock of their appealing 1978 debut album was forgotten and, despite the huge sales, it became deeply “uncool” to admit to liking Dire Straits. They were now the property of estate agents and conventional married couples. 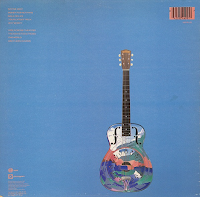 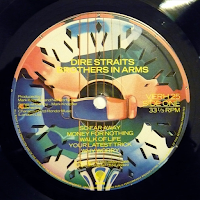 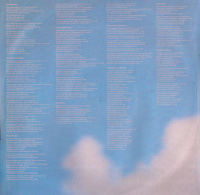 There are some good tracks on there, mind, but the overall ambience is so laid back as to be almost horizontal, particularly on solemn, reflective tracks like the title track and Why Worry. There is some serious good guitar on the urgent The Man's Too Strong and Ride Across The River, but nothing like the glorious stuff found on Tunnel Of Love or Telegraph Road. There is nothing as inspired on this album.

So Far Away is a pleasant, country-ish single and then there are the big hits, the poppy Walk Of Life and the somewhat irritating Money For Nothing. Your Latest Trick is a pleasurable piece of gentle saxophone and guitar AOR, however.

Dire Straits, despite the huge success of Brothers In Arms had only one more album left in them.