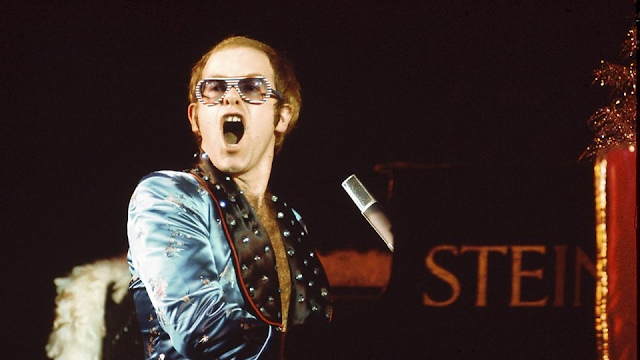 "I heard Little Richard and Jerry Lee Lewis, and that was it. I didn't ever want to be anything else" - Elton John


My first memory of seeing Elton John was around 1970, when I was eleven, and he appeared as a guest on a chat show, looking serious and bespectacled, singing Your Song. I remember my Father, who hated modern music, quite liking him, probably because of his studious appearance. A year or so went by, and one of my friends' elder brother had the Honky Chateau album. I developed a liking for Honky Cat and, of course, Rocket Man became a huge hit and Elton John was everywhere. 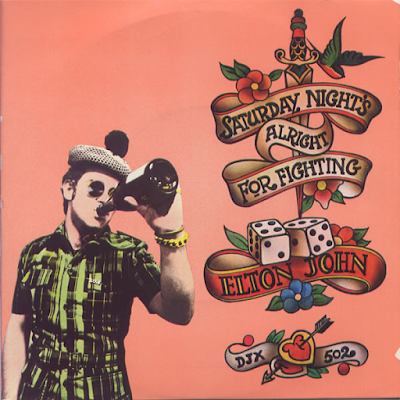 I loved Crocodile Rock and Daniel and bought the Saturday Night's Alright (For Fighting) single, with its excellent picture sleeve (a rarity in those days). Back then, Elton John was portrayed as a "lad" and his music was lad's music, often rocky and pugnacious and he liked football. Nobody was aware of his sexuality and indeed, when the news about it broke a year or so later, nobody cared. He retained his lads' audience in the mid-seventies.

For a while, Elton was as much of a glam rocker as anyone else around at the time and his six albums of piano-driven ballads were almost forgotten as he rocked the airwaves and concert halls of the UK and the US, where he was even more popular. 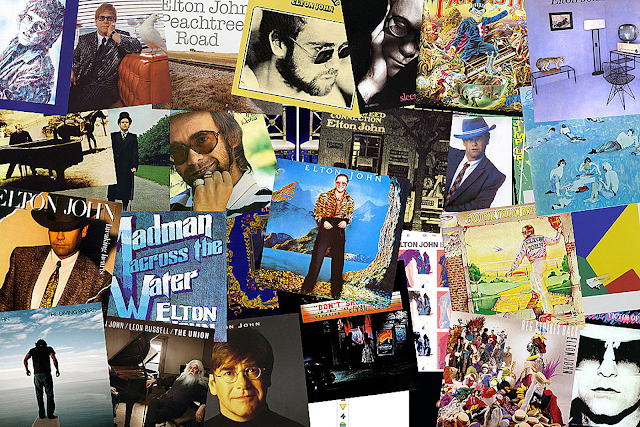 He had developed his preposterous stage persona and costumes in that period and it went along with the whole glam thing. For me, he went hand in hand with Bowie, Roxy Music, Mott The Hoople and Cockney Rebel as a credible glam artist. As punk and new wave took hold of my tastes in the late seventies and early eighties I drifted away from him, but I still enjoyed his output in the eighties and, as he ascended to "national treasure" status in the nineties, I realised that I had sort of stuck with him all those years. I have always thought of him as a bit of a spoilt, tantrum-prone absurdity, to be honest, but that has never really mattered, as his interpretations of the magnificent Bernie Taupin's wonderful songs are timeless and often magical. Despite his clear, self-admitted character flaws, his music has been a delight for many, many years.

REVIEWS - I have divided Elton John's career into four sections - click on the image to read the relevant reviews:-